By Jason Laday
Perspective from Suneya Hogarty, DO, FACOI
Source/Disclosures

By Jason Laday
Perspective from Suneya Hogarty, DO, FACOI
Source/Disclosures

Despite large reductions in out-of-pocket spending from 2010 to 2011, Medicare Part D beneficiaries who receive biologics for rheumatoid arthritis saw more than half of those savings lost by 2019 due to annual list price increases, according to data published in JAMA Network Open.

“Our study showed that despite the recent closure of the Medicare Part D coverage gap, or ‘donut hole,’ yearly increases in drug list prices have already eroded much of the anticipated savings for RA patients on specialty therapy,” Alexandra Erath, BA, of the Vanderbilt University School of Medicine, told Healio Rheumatology. “On average, in 2010, before the Part D donut hole was closed, the estimated annual out-of-pocket spending for a patient chronically using these drugs was $5,858.”

“In 2019, after the Part D donut hole was closed, the annual average out-of-pocket cost was estimated to be $4,801,” she added. “It is likely that patients will see their out-of-pocket spending continue to increase for these drugs as list prices continue to climb.”

To analyze the association of the closure of the Medicare Part D coverage gap with projected out-of-pocket costs over nine years for RA biologics, Erath and Stacie B. Dusetzina, PhD, also from the Vanderbilt University School of Medicine, conducted a cross-sectional study of available Medicare data. Using the Medicare Formulary and Pricing Files for the first quarter in each calendar year from 2010 to 2019, the researchers assessed data on 17 biologics used to treat RA. 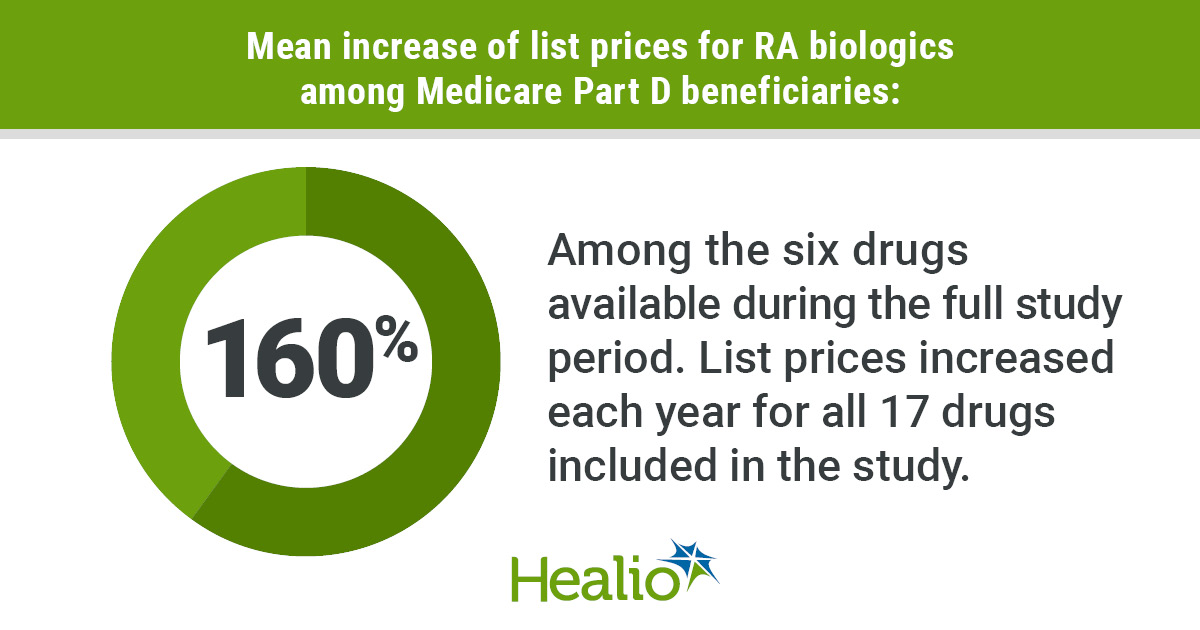 Despite large reductions in out-of-pocket spending from 2010 to 2011, Medicare Part D beneficiaries who receive biologics for RA saw more than half of those savings lost by 2019 due to annual list price increases, according to data.

For all included biologics, the percentage of money spent in the catastrophic phase increased each year, and was a mean of 22% higher in 2019 than in 2010, or the year first available.

“The key takeaways are that while the closure of the Part D coverage gap has helped lower costs for seniors, patients taking expensive biologic drugs still face significant out-of-pocket costs and no annual cap on drug spending,” Erath said. “From a policy standpoint, our results support an annual cap on patients’ out-of-pocket costs as well as an annual limit on manufacturers’ increases of list prices.”

“Medicare patients taking RA biologics are still exposed to significant out-of-pocket costs, and we know that higher out-of-pocket costs are associated with nonadherence and poorer clinical outcomes,” she added. “That is significant in itself; these patients are still being asked to pay thousands of dollars a year for access to medication for a chronic condition.” – by Jason Laday

Disclosures: Dusetzina reports grants from Arnold Ventures, The Commonwealth Fund and The Leukemia and Lymphoma Society, as well as personal fees from the Institute for Clinical and Economic Review.

Fortunately for rheumatologists and their patients, the authors recognized that prior work had evaluated anticancer therapies but no other expensive specialty drug markets. In this analysis, the authors asked the important question, “Now that the Medicare Part D donut hole is closed, have beneficiaries with rheumatoid arthritis experienced financial relief?” As those of us treating RA know, the authors found the unfortunate answer to that question was “no.”

The authors found that while the annual out-of-pocket costs of specialty rheumatology biologics did decrease from 2010 to 2019, the decrease has been very modest (roughly $1000) and significantly undercut by yearly list price increases. Furthermore, the authors correctly point out that with the closure of the coverage gap, most Part D beneficiaries found themselves propelled more quickly into the catastrophic phase, where no out-of-pocket maximum exists, further increasing yearly financial burden and preventing accurate budgeting of annual drug expenses.

Critics will undoubtedly trot out the familiar refrain that list prices do not capture rebates, which are paid to Medicare Part D plans and are designed to lower cost. But, the cold truth is that out-of-pocket burden is based on list price, effectively meaning that rebates help insurance plans but not Part D beneficiaries directly. Add to this, the movement of rheumatologists to a “treat-to-target” approach over the same study period, and the current picture of more biologic prescriptions being written – and then abandoned by patients – comes into sharper focus.

The tragedy, so clearly illustrated by this analysis, is that while rheumatologists have a remarkable and expanded armamentarium with which to effectively treat RA, the majority of these treatments are out of financial reach for most Part D beneficiaries. This is especially true in rural settings, where patients are often ineligible for low-income subsidy but certainly do not have the disposable income to afford even the slightly lower than 2010 annual out-of-pocket expense of biologic therapies for RA.