“This study is important because it was previously unknown whether ACR guideline authors have financial relationships with pharmaceutical companies,” Cole Wayant, BS, of the Oklahoma State University Center for Health Sciences, told Healio Rheumatology. “The importance of authors with financial relationships with industry rests on the fact that there is strong data suggesting that payments from a pharmaceutical company changes physician behavior.”

“A recent study from the National Bureau of Economic Research showed that immediately following payment from a pharmaceutical company, physicians who received the payment prescribed the drug more often than physicians without payments,” he added. “When applied to clinical practice guidelines, the implications of financial relationships with pharmaceutical companies may include more favorable recommendations for specific drugs. Before testing whether more favorable recommendations were rendered, we must first know whether conflicts exist.”

To analyze industry payments to authors of ACR clinical practice guidelines, Wayant and colleagues conducted a cross-sectional study using information catalogued in the Open Payments Database. According to the researchers, this database, which began in August 2013, includes speaking and consulting fees, education, honoraria, travel, food, research costs, grants, stock ownership and dividends. Wayant and colleagues included guidelines published during or after August 2014. 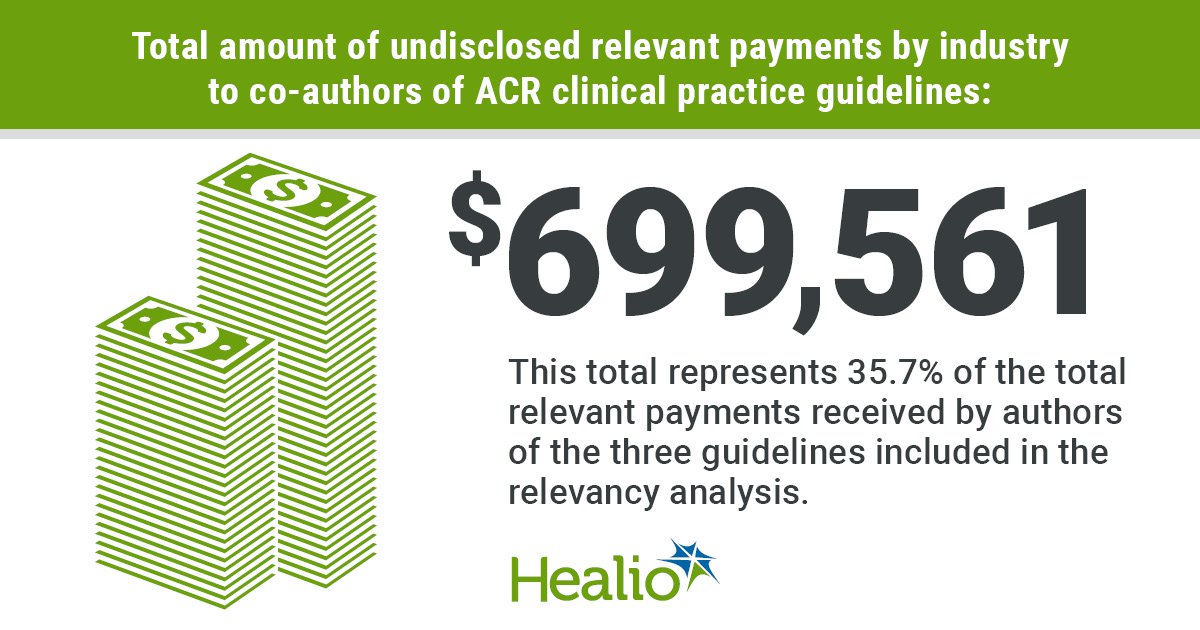 According to the researchers, the ACR’s rules require that a guideline’s principle investigator be free of conflicts of interest 1 year prior to the letter of intent deadline, and remain free of conflicts through publication as well as 1 year after. In addition, at least 51% of the guideline’s development group, voting panel and literature review team must be free of relevant conflicts 1 year prior to the letter of intent, through publication. In their analysis, Wayant and colleagues were unable to determine exact letter of intent deadlines, and so analyzed payments from the date of publication and 12 months prior. All data were extracted in parallel and blinded fashion.

The researchers identified five guidelines for analysis. The guideline on axial spondylarthritis had 27 authors, the guide on glucocorticoid-induced osteoporosis included 21 authors and another on glucocorticoid-induced rheumatoid arthritis had 26 authors. The last two guidelines, on perioperative management of antirheumatic medication and polymyalgia rheumatica, had 31 and 46 total authors respectively.

Three of these guidelines — on axial spondylarthritis as well as on glucocorticoid-induced osteoporosis and RA — recommended the use of brand-name drugs, and were thus included in the analysis of relevancy payments to authors.

According to the researchers, of the 89 total U.S.based physician authors from the five included guidelines, 56 (62.9%) received at least one payment. These 56 authors received a median of $522 (IQR, 119-2,500) and a total of $9,728,751. Among the three guidelines that recommended brand-name drugs, 19 authors received at least one industry payment relevant to the guideline recommendations, with a median relevant payment amount of $748 and a total of $1,961,362. Of the total relevant payments received, 35.7% ($699,561) remained undisclosed.

In addition, Wayant and colleagues noted gaps in the ACR’s disclosure requirements, including the lack of any policy requiring the disclosure of travel and lodging reimbursements, which constituted a large portion of payments to authors in the analysis.

In light of their findings, Wayant and colleagues made three recommendations that they believe would improve the “rigor and robustness” of ACR’s clinical practice guidelines:

“Recommendations issued by individuals with conflicts of interest govern the clinical practice of those without conflicts,” Wayant said. “The ACR guidelines are developed by a cohort of physicians who may be very unlike ‘normal’ rheumatologists. The ‘normal’ rheumatologist may not have substantial relationships with industry and their only bias may come from a meal or lecture they attend. These conflicts are much different from the conflicts seen in this study, since ACR guideline authors frequently consult, speak and do research in conjunction with industry.”

“So, it stands to reason that ACR guideline authors may interpret clinical research and formulate recommendations differently than ‘normal’ rheumatologists — and this may not be due to their ‘expert’ status,” he added. “Given what is known about the strong effect of conflicts on prescribing habits and physician behavior, one must wonder whether a conflicted author and non-conflicted author would issue similar recommendations.” – by Jason Laday

Disclosures: Wayant reports no relevant financial disclosures. Co-author Carrie Gilstrap, DO, reports advisory board membership for Janssen and Sanofi-Genzyme, as well as reimbursement from Comsort for a survey.

To find that authors of clinical practice guidelines have financial conflict of interests (COIs) is not surprising — many of the authors are major players in the field. They often are simultaneously researching new therapies and consulting for industry, as well as authoring multiple papers.

Over the past decade or two, as NIH research funds have become less available to those in academics, industry financed research represents a larger share of research dollars (and budgets). How do you find guideline authors who have no COIs in a world where the active participants in that particular area of rheumatology, almost by necessity, need industry support to be successful? I don’t have a good answer for that question.

Some of the authors are very heavily conflicted, receiving industry support from almost every company in their area of research, and yet their depth of knowledge far exceeds their colleagues who are not so heavily involved in research. It seems that their opinion is valuable but needs to be balanced by other guideline authors who do not have industry support.

This article does point out that guideline authors have COIs that are underreported, which is a violation of trust. Only by retrospectively doing a review of the Open Payments Database (OPD) did the researchers discover these payments. Non-U.S. physician authors of ACR clinical practice guidelines do not have OPD reporting so it is impossible to check on them.

The influence of the pharmaceutical industry as well as the laboratory testing industry on guidelines is a major concern. Groups like the ACR need to continue to review this issue and try and have consequences for guideline authors who fail to report industry payments. ACR also needs to continue to require the lead author to be free of any conflicts and to have the majority of the authors to similarly be free of any conflicts.

The ACR shares the authors’ viewpoint that effective management of disclosures and conflicts of interest in guideline development is essential to the advancement of our field. In this spirit, we periodically conduct internal evaluations of our policies and procedures to ensure we are promoting an unbiased environment for guideline development while also forming teams with the clinical and research expertise necessary to develop credible, evidence-based guidelines. We too found some of the article’s points to be true in our most recent analysis and appreciate the opportunity to add some additional context to the topic.

The ACR agrees with the article that guideline development teams ideally should be comprised mainly of individuals without conflicts of interest related to the paper’s topic, including the principal investigators and literature review leaders, and we actively seek out experts who meet these criteria. However, we have found the small size of our specialty creates a scenario where forming groups with the necessary expertise to produce a guideline with face validity for our community sometimes requires involving individuals with conflicts of interests (COI), frequently being respected leaders in the investigation of the drug or disease state.

As correctly noted by the authors, this is largely due to the smaller pool size of experts likely to be unconflicted for narrow topics where fewer experts exist. As a smaller specialty with less common diseases, the ACR encounters this challenge regularly when forming guideline teams. With fewer people working in our field overall, a higher percentage of these individuals is required to accomplish necessary work like research studies, inevitably resulting in a pool of unconflicted experts that is smaller.

We believe this is why the 2011 IOM report included the clause “whenever possible” in reference to guideline development team members having no conflicts and why the ACR cannot realistically require 100 percent unconflicted teams.

In some cases, even the ACR’s 49% maximum COI threshold has prevented us from forming a guideline team, because a majority of the identified experts had been involved in therapy-related research to increase the therapeutic pipeline for our patients. Therefore, we allow for a minority of individuals with COI, when necessary, and then manage the group’s interactions carefully to ensure full transparency and minimize bias within the process.

We also require that project teams publish an affected companies list for each guideline with the project plan on the ACR website, though we acknowledge the ACR is not alerted to all industry activities that might pose COI, so it can only serve as a guide to trigger individuals’ thinking about the relationships they should disclose.

Our internal analysis also agreed with the authors’ conclusion that some individuals’ disclosures do not match from one source to another, e.g., journal vs. CMS Open Payments Database (OPD). We found more than one reason for this – but primarily that the time periods being examined usually differ and that a significant percentage of individuals say the publicly reported information is inaccurate. Many have left the report uncorrected either because they were unaware of it, discovered errors too late to appeal for a correction or felt the appeals process was too cumbersome to be worth the effort.

We expect these issues will continue to be a challenge for guideline developers but plan to continue our current process of requesting that all relationships be disclosed and emphasizing this requirement in disclosure-related communication, so relationships are not inadvertently omitted, because the individual does not think something is relevant.

Because we feel continual emphasis on this point is beneficial, ACR leadership decided in 2019 to update our polices to require a cross-reference of author disclosures against the OPD. While this will not affect the guidelines discussed in the article, we hope this future step will help individuals be more aware of any errors in their public listings in time to make an appeal. It’s worth noting this will not impact non-U.S. or non-physician participants, but the ACR counts these individuals in our COI thresholds, because they are very active participants in ACR guideline projects and at times serve in the highest leadership levels (e.g., literature review lead).

We appreciate the field’s interest in ensuring thoughtful management of this area and will continue to assess other strategies for ethically managing this important aspect of guideline development.