Black women who experience sexual and physical abuse during childhood are at an increased risk for developing systemic lupus erythematosus as an adult, according to data published in Arthritis Care & Research.

“Psychosocial stress such as PTSD has been shown to influence autoimmune diseases, including systemic lupus erythematosus, likely through the dysregulation of the adaptive stress response and inflammatory processes,” Yvette C. Cozier, DSc, MPH, of Boston University, told Healio Rheumatology. “Adverse childhood experiences have been associated with an increased risk for overall poor health in adulthood. Children who experience victimization show elevated levels of inflammatory biomarkers several decades later, as well as autoimmune diseases in adulthood, including lupus.”

To analyze the link between childhood physical and sexual abuse and SLE among black women, Cozier and colleagues studied data from the Black Women’s Health Study, which in 1995 enrolled 64,500 participants in the continental United States aged 21-69 years. The 2005 follow-up questionnaire, which contained items on abuse, was completed by 43,179 women in the study. Cozier and colleagues excluded 483 women who reported SLE prior to 1995, as well as another 6,544 women with missing information. The researchers’ final analysis included the remaining 36,152 participants. 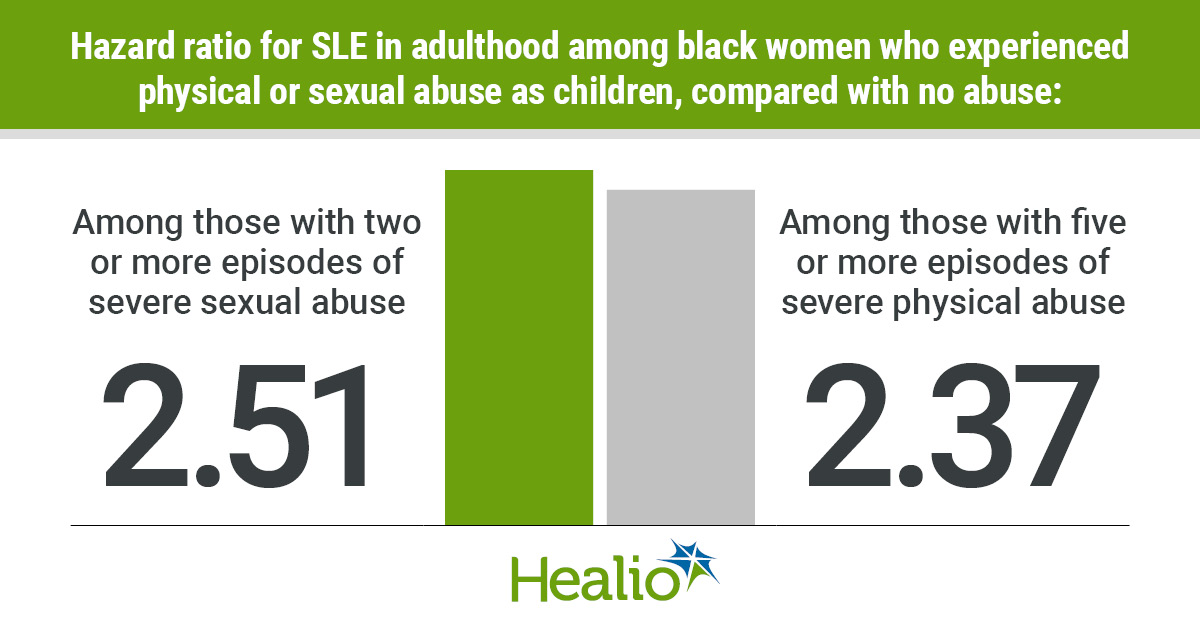 Black women who experience sexual and physical abuse during childhood are at an increased risk for developing SLE as an adult, according to data.

According to Cozier and colleagues, there were 101 confirmed cases of SLE among participants who completed the questions regarding childhood abuse throughout 670,822 personyears of followup. Both physical and sexual abuse during childhood were associated with statistically significant increases in SLE incidence, the researchers wrote.

Specifically, the hazard ratio for SLE associated with two or more episodes of severe sexual abuse was 2.51 (95% CI, 1.29-4.85), compared with no abuse, even after adjusting for alcohol consumption, smoking, BMI, oral contraceptive use, age at menarche and parental education. The multivariableadjusted hazard for SLE with five or more episodes of severe physical abuse was 2.37 (95% CI, 1.134.99).

“Our results must be considered exploratory, as it was based on small numbers of women with SLE reporting abuse — exposed cases,” Cozier said. “Nevertheless, our findings are consistent with those from previous studies conducted in predominantly white populations showing that psychosocial stress is associated with increased SLE.”

“Thus, it contributes to a growing body of evidence demonstrating an association between psychosocial factors and SLE,” she added. “Trauma affects individual health long after the ‘scars’ appear to be healed. Not only must we protect children during these sensitive periods in life, we must continue to support survivors.” – by Jason Laday

In this study, the researchers conclude that there is a potential increase risk for SLE in black women who have experienced physical and sexual abuse during their childhood years. While there is a need for more research, this study certainly sheds light on how past trauma may manifest in an individual.

As we care for patients, we all know that we need to be screening our patients for abuse. As health care professionals, we are mandated reporters by law and we know the serious consequences of abuse, including death. However, I would encourage us to ask ourselves if we truly ask the hard questions.

Do we go beyond the phrase “Are you or do you feel safe at home?” — do we provide examples of what abuse might look like? Do we spend time alone with our patients, ensuring that they have every opportunity to feel safe to speak up? Do we ask abuse screening questions of our patients on a regular basis, not only once as a new patient but at subsequent visits? Or do we think that we know a patient well enough to know that they aren’t being abused? Finally, if someone confides in us, do we know what to do next?

We all have an important role to play in assuring that we identify abuse in the patients that we care for in our rheumatology practices. Abuse may have many different faces and, as this study suggests, may have additional impact in the lives of patients beyond physical and physiological scars.