Data from the NIH indicate that antiphospholipid syndrome is linked to one-third of new strokes occurring in individuals younger than 50 years, and may be responsible for up to 1% of all thromboses. Despite recent estimates that this condition affects as many as 1 in 2,000 individuals in the United States, its exact prevalence remains unknown.

Like many autoimmune diseases, antiphospholipid syndrome (APS) is more common in women — fivefold more common than in men. It also may occur along with another autoimmune disorder; 10% to 15% of patients with systemic lupus erythematosus also have APS. Additionally, as many as one-quarter of all women with two or more spontaneous miscarriages may have APS while 20% of deep vein thrombosis events, pulmonary embolism events and amputations have also been attributed to the disease.

Despite being implicated as a major contributor to stroke, myocardial infarction, deep vein thrombosis and pregnancy morbidity, Christina M. Pohlman, president, executive director and co-founder of the APS Foundation of America believes that APS does not receive the type of mainstream attention necessary to combat adverse outcomes, with misdiagnoses and delayed diagnoses all too common among these patients. 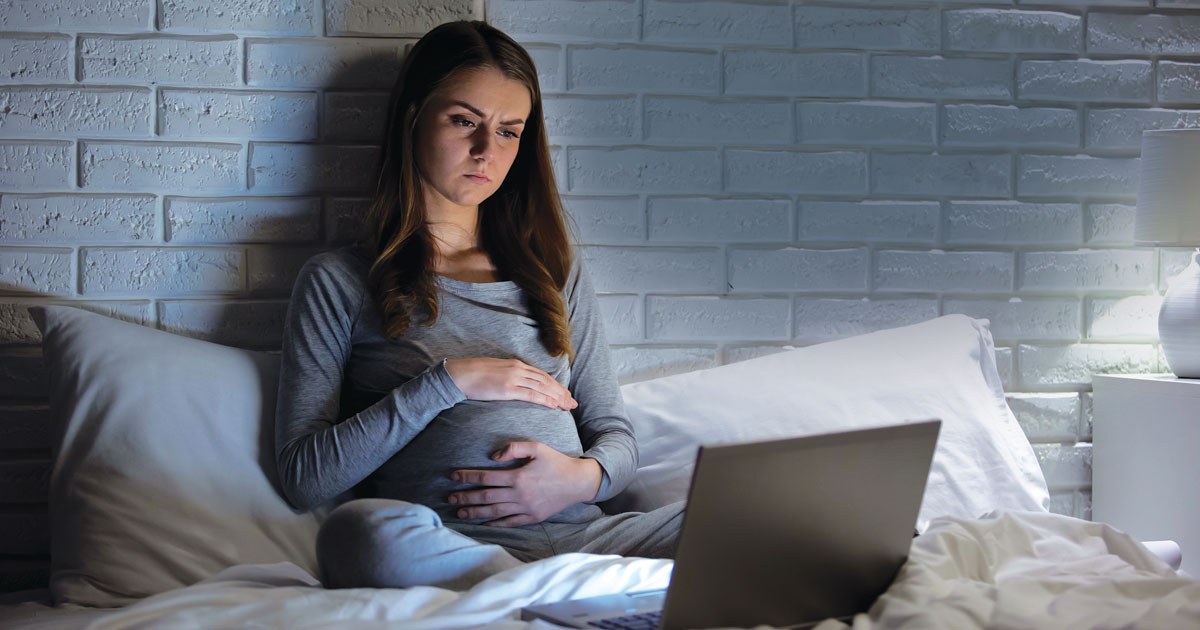 Antiphospholipid syndrome has been linked to significant pregnancy morbidity, including recurrent miscarriage, intrauterine growth restriction, pre-eclampsia and preterm birth. However, with early diagnosis and treatment, the majority of patients go on to have a successful pregnancy
Credit: Adobe Stock

Founded in 2005, the APS Foundation of America (APSFA) is currently the only nonprofit health agency in the U.S. that is specifically dedicated to bringing awareness to the disease. Pohlman — herself an APS patient — considers increased awareness in the U.S. to be a significant achievement of the APSFA.

“Previously, the only other organization dedicated to this condition was in the United Kingdom,” she said. “We believed it was time this autoimmune disease had a regular awareness month where accurate information could be broadcast about APS to the lay person as well as the medical community. For example, June is now recognized as APS Awareness Month and June 9th as World APS Awareness Day.”

APSFA aims to support patients and their friends, family and caregivers, largely through its extensive social media network. The organization also aims to increase education and awareness of the disease, as well as raise money to fund and support research initiatives.

In 2016, the organization was able to provide three grants to the Silvia Pierangeli Young Scholar Award at the 15th International Congress on Antiphospholipid Antibodies.

“We were thrilled to have representation there and were invited back to attend the next congress in 2019,” Pohlman said. “We have also donated to the Congress in previous years, but it was not under this specific Scholar Award.”

Pohlman noted that the organization will continue to donate to the Congress for at least 5 years.

“Attending these congresses and other events of this type allows the APSFA to build a positive relationship with physicians and APS patients from all over the world,” she said. “Also, it keeps us abreast of what is happening with APS research and allows our community’s voices to be heard.”

Pohlman said receiving invitations to medical conferences to present information and opinions about APS, particularly from the patient perspective, is also important.

“We are able to share what we see happening with patients, which was something that we were never able to do before,” she said, and noted that the organization actively participates in the International Congress of Antiphospholipid Antibodies, the Childhood Arthritis and Rheumatology Research Alliance (CARRA), and other such organizations. “Physicians now want to hear from us. This is important because the patients now get to have a voice.”

Then Pohlman brought it to a more personal level.

Regarding the clinical trials and research arena, APSFA is also a fundraising operation that aims to provide resources to worthwhile organizations.

“In the past, we have given money to research groups such as APS ACTION, the APS Collaborative Registry, The Rare Thrombotic Disease Consortium, Genetic Alliance, the European Organization for Rare Diseases and the AARDA Autoimmune Summit,” Pohlman said. “We have also sponsored medical students to attend specialized training for dealing with APS.”

However, Pohlman noted that the organization has never raised money specifically for research.

“Our donated funds primarily help go to maintaining freezers, buying beakers, test tubes and the like,” she said. “However, we would like to raise more.”

That said, raising awareness about clinical trials among patients is a key function of the Foundation, according to Pohlman.

“We want to let patients know how clinical trials help them and what research is currently out there,” she said. “Our aim is to support and inform our community about what is currently happening for antiphospholipid syndrome.”

One way APSFA does this is by promoting information through social media to notify patients and caregivers of both the disease as well as providing a reference point to groups conducting research, which helps increase participation in clinical trials.

“The more research they know is happening, the less alone they feel compared to cancer patients, for example,” she said.

Looking ahead, the Foundation’s 5-year plan includes setting aside 10% of donations for APS research.

“This money will go to a researcher, group of researchers or facility that is doing APS research,” Pohlman said. “There will be an application process for those who are interested in our funding. We will review it as a board of directors, with two medical advisors who do not have a conflict of interest in the funding, and two outside APSFA volunteers.”

Looking to the Future

The foundation has continued to branch out by building collaborative relationships with patient registries like the Coordination of Rare Diseases at Sanford (CoRDS) Registry and sending representatives to annual medical conferences hosted by groups like the Venous Disease Coalition and the American College of Rheumatology in order to spread awareness of their organization’s efforts among clinicians.

In 2019, the International Society on Thrombosis and Haemostasis recognized the dedication of APSFA to thrombosis education and thrombosis-related issues, naming Pohlman as a runner-up in their World Thrombosis Day Thrombosis Ambassador of the Year program. Now in its third year, this program recognizes individuals devoted to building awareness about thrombosis in their community, region, country and/or globally in an effort to save lives.

Looking ahead to 2020, the APSFA plans to award a college-aged student a $1,000 scholarship. Pending funding for this scholarship, there may be more than one awarded per year, according to Pohlman.

“This is something we would like to do yearly,” she said. “This will be a one-time, non-renewing scholarship that will be granted to someone who is going to medical or nursing school.”

Pohlman added that there will be an application process for those who are interested in this scholarship. “More information will be available soon, where we will explain the qualifications, application process and how the recipient will be chosen,” she said. — by Rob Volansky