Diagnosis detective: Discerning vasculitis from its many mimics

Clinicians who treat vasculitides are accustomed to uncertainty. Vasculitis, in its many forms, presents a laundry list of challenges, often leaving rheumatologists frustrated, if not stumped, at some point during diagnosis and management. But the challenges are not limited to vasculitis itself. An entire cross-section of conditions — from antiphospholipid syndrome to HIV to hematologic malignancies — can mimic vasculitis, prompting frequent misdiagnoses and potentially fatal treatment decisions.

“It is important for clinicians to realize, first, that vasculitis is a group of heterogeneous disorders, which can substantially vary in presentation,” Rennie Rhee, MD, assistant professor of medicine at the Hospital of the University of Pennsylvania, said in an interview. “Then you must realize that each individual type of vasculitis — polyarteritis nodosa, giant cell arteritis (GCA), Takayasu’s arteritis, ANCA-associated vasculitis, etc. — has its own mimics.”

The key here is “broad categories,” noted Rhee. Classifying each type of vasculitis and its potential mimics would be a sprawling, and possibly even pointless undertaking, largely because of said uncertainty. There are too many plausible permutations of vasculitis and mimics, too many misdiagnoses and treatment pitfalls, to categorize completely.

Despite these challenges, Philip Seo, MD, MHS, director of the Johns Hopkins Vasculitis Center, attempted to simplify the equation. “Inflammation is the hallmark of vasculitis, and the absence of inflammation or B-type symptoms such as fevers, chills or weight loss should lead to a search for other diagnoses,” he told Healio Rheumatology. “Also, although the vasculitides, as a whole, can cause a broad range of symptoms, each diagnosis tends to be associated with a particular pattern of involvement.”

Perhaps the best way to tackle this subject is to look at some of the patterns. For example, there are some mimics that are more common and more easily recognizable than others. There are some guiding principles for patient workup that should not be ignored. Finally, having a firm understanding of some clear and obvious treatment pitfalls can prevent serious consequences. 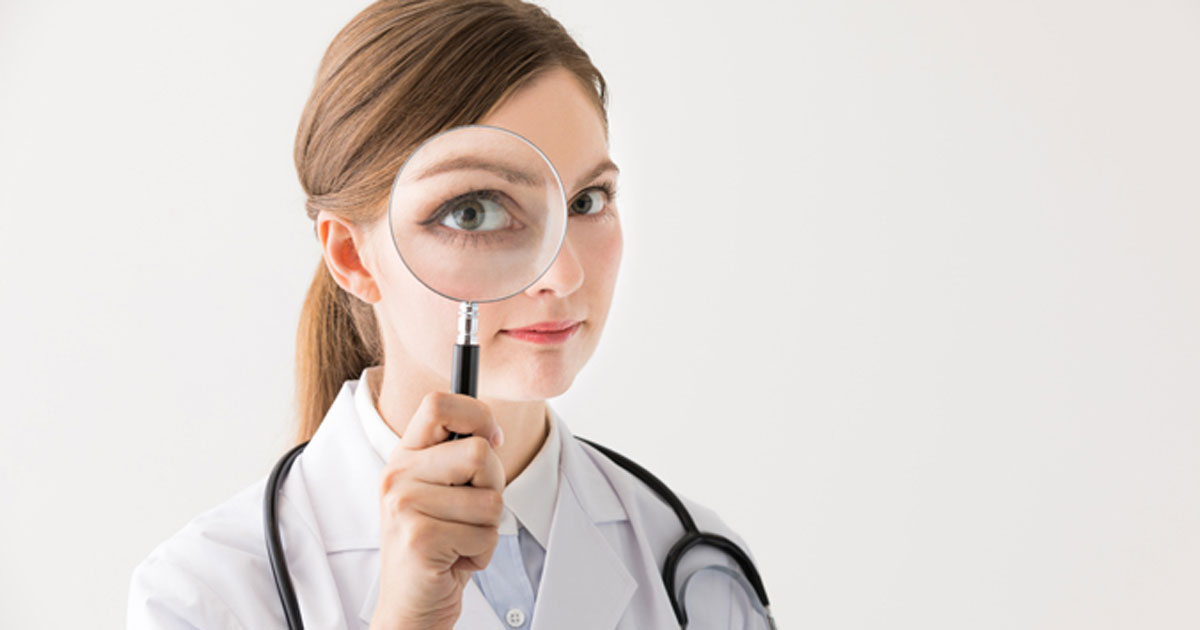 Vasculitis, in its many forms, presents a laundry list of challenges, often leaving rheumatologists frustrated, if not stumped, at some point during diagnosis and management.
Source: Adobe

If there is an over-arching consideration for dealing with a suspected vasculitis mimic, rheumatologists should keep in mind a fundamental component of their specialty: That they often have to work with other specialties. In this case, rheumatologists may find themselves co-managing a patient with their infectious disease or hematology colleagues.

In an ideal situation, for any of these diagnoses, treatment should be directed towards reducing the viral load. “For patients who have severe disease, which threatens the function of life or a vital organ, immunosuppression may be necessary,” he said. “For patients with HCV-associated cryoglobulinemic vasculitis in particular, rituximab can be particularly effective for those who fail to respond to antiviral therapies.”

But the story does not end there, according to Rhee. “Even bacteremia can look frighteningly similar to ANCA-associated vasculitis,” she said. “In fact, the ANCA blood test can be positive in patients who have bacteremia.”

This misdiagnosis can be “devastating,” according to Rhee, because the treatment for vasculitis — immunosuppression — can exacerbate the infection.

Looking beyond ID and hematology, Rhee and Seo addressed some of the other mimics they see in the clinic, starting with antiphospholipid syndrome (APS).

“APS is a hypercoagulable disease that causes clotting, typically venous clotting, although sometimes there is arterial thrombosis,” Rhee said. “It can look like a vasculitis because both diseases involve obliteration of blood flow to organs or tissue. The essential difference is that vasculitis is inflammatory while APS is primarily an issue of thrombosis, so the management is different.”

Catastrophic APS can cause occlusion of the capillary arteries, Seo added. “Because the occlusion is caused by thrombosis rather than inflammation, biopsy of the affected organ is the most reliable way to distinguish this from vasculitis,” he said. “In addition, vasculitis is associated with diffuse inflammation, whereas antiphospholipid syndrome is not.”

Another likely mimic is the autoimmune inflammatory condition, IgG4 disease. “We often see IgG4 as being associated with aortitis, which also can occur in some large-vessel vasculitides like GCA or Takayasu’s arteritis,” Rhee said. “IgG4 is also sometimes accompanied by asthma, which makes it look a lot like eosinophilic granulomatosis with polyangiitis.”

Digging deeper into this territory, Seo noted that eosinophilic granulomatosis with polyangiitis is also associated with asthma, hypereosinophilia and neuropathy, whereas microscopic polyangiitis leads to a pulmonary-renal syndrome. “Unusual combinations of signs and symptoms may be a tip-off that the patient has a vasculitis mimic,” he said.

IgG4 tends to induce a peri-aortitis, which is inflammation around the blood vessel, rather than inflammation of the blood vessel itself, according to Seo, who offered an easy method of making a diagnosis. “It can be distinguished from a large vessel vasculitis, such as Takayasu's arteritis or GCA, by imaging the vessel with MRI,” he said.

Another common vasculitis mimic that a clinician may encounter is one that is drug-induced. These diagnoses often center around levamisole, an adulterant used to cut cocaine. Levamisole is an anthelmintic agent that is banned in the United States. As it pertains to the current discussion, this agent is associated with a positive ANCA blood test, according to Rhee.

“It can also lead to features that appear very similar to vasculitis, including necrotic purpuric skin lesions and kidney involvement, as well,” she said.

Rhee added simply using cocaine itself can lead to destructive sinonasal disease that presents similarly to granulomatosis with polyangiitis (GPA). “There is septal perforation, nasal crusting and bloody noses, all of which are features we see in GPA,” she said. “Obviously, the most important intervention is for the patient to stop using cocaine.”

Clinicians treating individuals with high blood pressure may also benefit from this advice, noted Rhee. “Hydralazine, an anti-hypertensive medication used to treat elevated blood pressure, can cause patients to develop ANCA,” she said, adding that the patients can go on to develop lung hemorrhage or glomerulonephritis. “It looks exactly like ANCA-associated vasculitis, but the important difference is that in drug-induced vasculitis, the offending agent — in this case hydralazine — needs to be discontinued.”

Some other features that can clue the clinician that there is a drug-induced process, as opposed to true vasculitis, include multiple other positive laboratory markers not typically seen with ANCA such as cryoglobulins, antinuclear antibodies, rheumatoid factor and anti-histone antibodies, according to Rhee.

Maintaining a broad differential in a patient with suspected vasculitis is key to making appropriate treatment decisions the first time around, and prior to the initiation of treatment. Whenever possible, obtaining biopsy confirmation is an important step to working up a suspected case of vasculitis, noted Rhee.

“We sometimes end up shying away from doing biopsies, but a biopsy can be immensely helpful, particularly in ruling out other diseases such as infection, malignancy or thrombosis,” she said. “Biopsy facilitates eliminating uncertainty, although even a positive biopsy for vasculitis is not sufficient to make a diagnosis. The clinical context is critical to making a diagnosis.”

In Seo’s opinion, imaging is generally sufficient for medium- or large-vessel vasculitides. “It is important to remember that diagnosing vasculitis based on signs and symptoms alone, in the absence of objective data, may be fraught,” he said.

The true value of imaging tests can come if there is arterial narrowing or occlusion, wall thickening, or aneurysm, according to Rhee. “Imaging can also give us information about the lungs or the sinuses,” she said. Beyond biopsy, lab tests to see how various organs are functioning — the kidneys, the liver, etc. — can also have utility. “If you have an idea that it is a particular disease, either a vasculitis or its mimic, the lab tests can tell you if it is consistent with that disease or diagnosis.”

For Rhee, patient workup comes back to rheumatologists being willing to work with other specialties. “In many cases, clinicians treating vasculitis will be required to work with ear, nose and throat specialists, pulmonologists, dermatologists, ophthalmologists or neurologists, among others,” she said. “Vasculitis really is a multidisciplinary field.”

Rhee urged rheumatologists to be open to other experts who may help evaluate a particular system. This can help eliminate or narrow down the possibilities of whether it is a vasculitis or a mimic.

Seo stressed that following through from patient workup to treatment initiation is essential. “Establishing a firm diagnosis, to the best of your ability, prior to initiating treatment with immunosuppression, is key,” he said. “Unfortunately, many of the mimics of vasculitis may be masked or worsened by immunosuppression. The diagnostic yield of biopsy is also decreased by immunosuppression, so sometimes you have to decide to perform a procedure even before you know if you will definitely need the data.”

Fortunately, most rheumatologists are familiar with the toxicities from the drugs in their armamentarium, according to Rhee. “Our colleagues are cognizant of infection risks with immunosuppression,” she said. “What we also need to understand is that, in some cases, we end up treating patients with high doses of drugs that are not providing much benefit.”

But the solution to this is, as one might expect, fairly simple: “If the disease is progressing on treatment, step back and reconsider,” Rhee said.

This is where the issue can come back to initial assumptions about the patient’s condition. “It can be easy to get stuck on a diagnosis,” Rhee said. “And this is another case where it is beneficial to work with other rheumatologists, or colleagues in other specialties. Sometimes a fresh set of eyes can inform better management decisions.” – by Rob Volansky