Patients with systemic lupus erythematosus who adhere to antimalarial treatments demonstrate a 39% lower risk for developing type 2 diabetes, compared with those who discontinued, according to findings published in Arthritis Care & Research.

“Medication non-adherence is a significant problem in rheumatology and lupus is no exception,” Mary A. De Vera, PhD, of the University of British Columbia Faculty of Pharmaceutical Sciences, told Healio Rheumatology. “This study is important because although the burden of non-adherence is known in lupus, there is actually limited evidence on its impacts.”

“To our knowledge, this is the first study that has evaluated the association between non-adherence to antimalarials in lupus and a clinical outcome, specifically type 2 diabetes,” she added. “We picked type 2 diabetes because it is known complication of lupus that hydroxychloroquine use is known to be protective for.”

To examine the link between antimalarial adherence and type 2 diabetes mellitus among patients with SLE, Salmasi and colleagues conducted a retrospective, longitudinal cohort study of patients in Population Data British Columbia. The database includes data on outpatient visits, hospitalizations, demographics and vital statistics on the entire population of British Columbia, Canada. From that database, the researchers included 1,498 adults with incident SLE who used antimalarials at any time between January 1996 and December 2012. 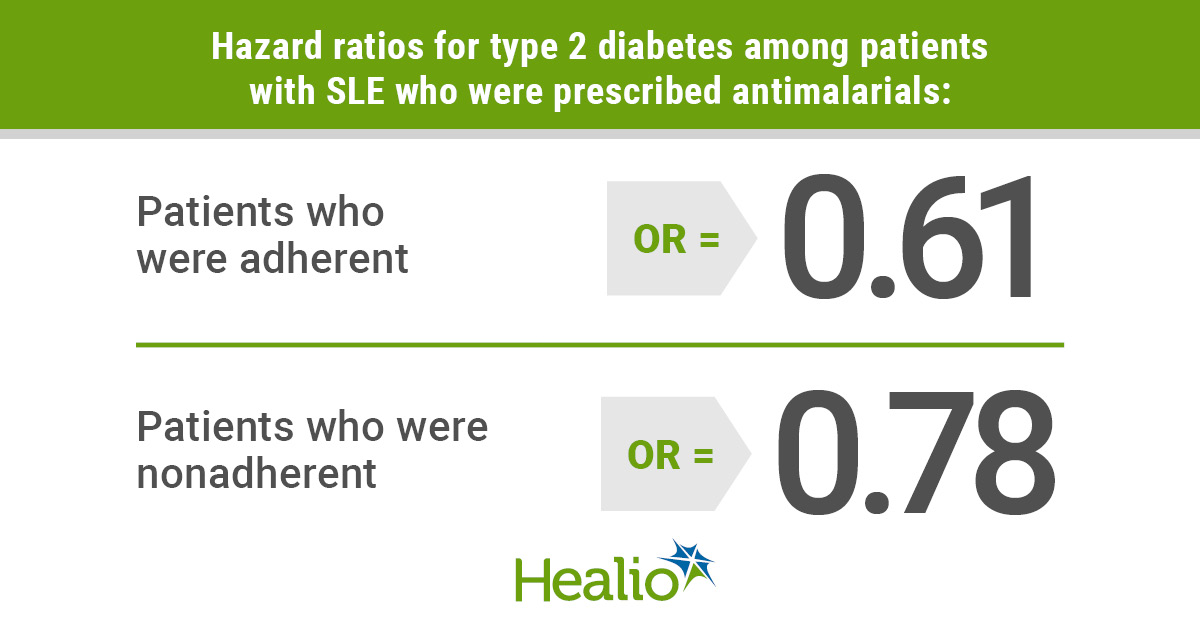 Patients with SLE who adhere to antimalarial treatments demonstrate a 39% lower risk for developing type 2 diabetes, compared with those who discontinued, according to findings.

Information from the Population Data British Columbia was linked to PharmaNet, which includes data on all drug prescriptions given outside of a hospital in the province since 1996. The researchers established antimalarial drug regimens by defining each new course whenever patients exceeded a 90-day gap between refills. They then calculated the proportion of days covered (PDC) for each course.

Adherence was defined as a PDC of 0.9 or greater, with nonadherence set within the range of 0 to 0.9 and discontinuation defined as no drugs taken. Diabetes outcomes were measured based on outpatient or inpatient visits, or through the documented use of anti-diabetic medication.

According to the researchers, there were 140 incident cases of type 2 diabetes during a median follow-up period of 4.62 years. Following multivariable analysis, the HRs were 0.61 (95%, 0.4-0.93) for patients identified as adherent and 0.78 (95% CI, 0.5-1.22) for those who were nonadherent, compared with those who discontinued. In addition, any intake of less than 90% of the prescribe antimalarial dose resulted in the loss of the drug’s protective effect against type 2 diabetes.

“The clinical significance of the findings is that to our knowledge, they provide the first empirical evidence for a protective effect of adherence to antimalarials for a known or important complication in lupus,” De Vera said. “Antimalarials, particularly hydroxychloroquine, are often referred to as ‘life insurance’ in lupus given recommendations for their use and known effectiveness. Given what we also now about poor adherence to these drugs, I think it is important to generate evidence to support their use.” – by Jason Laday