Trump’s claim to have ‘saved’ preexisting conditions clashes with record

Earlier this month, health care policy suddenly managed to steal some headlines away from impeachment and the ongoing horserace of the 2020 Democratic presidential primary, when President Donald Trump declared in a tweet that he, “was the person who saved” protections for patients with preexisting conditions.

That Jan. 13 statement — a response to a television ad in which Democratic presidential candidate Michael Bloomberg charged that Trump had broken a campaign promise to protect patients with preexisting conditions — left several fact checkers calling foul. FactCheck.org, a project of the Annenberg Public Policy center, commented, “We’re not sure how Trump can argue he ‘saved’ preexisting conditions, when the failed Republican bills he supported would have weakened the ACA protections.”

PolitiFact, in partnership with Kaiser Health News, classified Trump’s statement as a “Pants-on-fire” level falsehood, adding, “The president’s claim has no factual basis and flies in the face of his ongoing policy efforts.” 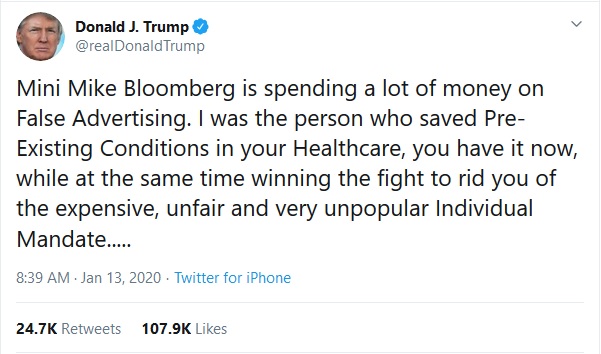 Catherine Lugg, PhD, a professor of education in the department of educational theory, policy and administration at the Rutgers University Graduate School of Education, in an interview with Healio Rheumatology, was even more blunt.

“He’s lying,” Lugg said. “His record is that he is trying to get rid of protections for preexisting conditions.”

Although her professional expertise and training lies in education and education politics rather than health care policy, Lugg’s connection to the topic is more personal — she is a patient. Diagnosed with rheumatoid arthritis in 2012, then with psoriatic arthritis in 2015 and later Sjögren’s syndrome in 2019, Lugg said she has immersed herself in the politics of health care.

Lugg has also made connections and friends within the autoimmune patient community, many of whom lack the health coverage she enjoys as a unionized and tenured state employee. She described how many of her friends find themselves forced to follow the day-to-day politics of health care, fearing that protections for patients like them — with preexisting conditions — could soon disappear.

“I follow this very closely because I have friends that are in danger,” Lugg said. “I’m a state employee — and a unionized state employee at that — so I’m protected, but my friends aren’t. For the people I know with various autoimmune diseases, this is terrifying.”

As per the Affordable Care Act of 2010, insurers cannot currently deny coverage, or charge more, based on the health status or preexisting conditions of an individual. Later, as a 2016 candidate for president, Trump promised to “repeal and replace” the legislation, while also maintaining that protections for patients with preexisting conditions would be preserved.

However, as president, Trump supported a series of three Republican health care bills in 2017 that would have caused some patients with preexisting medical conditions to pay higher premiums, according to FactCheck.org.

A GOP-backed bill passed by the House of Representatives in May 2017 would have allowed states to gain waivers granting insurers permission to charge people with preexisting conditions who had a lapse in coverage for 1 year. The Senate version of the bill, which was rejected by one vote in July 2017, required insurers to cover people regardless of health status on state and federal exchanges, but allowed them to sell noncomplying plans on the individual market. These plans would have allowed insurers to deny coverage or charge more for patients with preexisting conditions on the individual market.

A third Republican plan, known as the Graham-Cassidy bill, would have allowed insurers to price policies based on the individual’s health status in states that allowed it. This plan was withdrawn in September 2017. 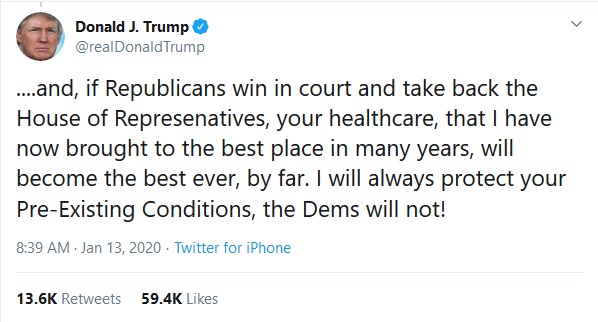 “Well, they want to get rid of it because of the cost associated with it,” Lugg said. “However, you have to drill down hard into the language to get to that part. They aren’t going to put it at the top of the bill. You have to read — and read very carefully — as to what they are saying in a bill. They won’t call it ‘preexisting conditions.’ ‘They’ll say, ‘medical conditions prior to the date the legislation was enacted,’ or something like that.”

In a follow-up tweet on preexisting condition, Trump also stated that, “if Republicans win in court and take back the House of Represenatives [sic], your health care, that I have now brought to the best place in many years, will become the best ever, by far.”

This is a reference to a lawsuit, known as Texas vs. Azar, in which the Trump administration is backing a group of Republican-led states seeking to dismantle the entirety of the ACA. Their argument stems from a provision in the 2017 Republican-backed tax law that eliminated the penalty associated with the individual mandate in the ACA. According to the plaintiffs in Texas, the lack of individual mandate penalty should void the entire law. The case, under the name Texas v. United States, is expected to ultimately land before the U.S. Supreme Court.

If the ACA is struck down, it remains unclear how or when — or if — it would be replaced. According to Lugg, such a decision would send patients back to the days before the ACA’s protections.

“In court, his administration has argued to end coverage for patients with preexisting conditions,” she said. “Everything would basically go back to what it was pre-Obamacare, for everyone. That would be bad news for even those of us with state insurance coverage. Again, because I’m a state employee and unionized, I have always been covered, and I don’t think that would change, but it would drive up the cost of such coverage.”

However, Lugg didn’t always have that health coverage, which was what initially led her to begin following health policy. At first, she was assisted by her brother, who previously followed the health care industry professionally as an employee of the financial services company, Standard & Poor’s.

However, after her diagnoses, the issue became more personal.

“I’m a politics of education person, so I said, ‘Oh, let’s use all that wonderful training, and chase it a little more aggressively,’” Lugg said.

“I’m more aware now,” she noted. “I try not to get terrified, but I am similarly situated with my friends in that we have autoimmune diseases, and over time we have all experienced more than one disease. As my dermatologist says, ‘Autoimmune diseases are like dandelions — they never come alone.’ So, over time we all pick up, or develop, more.”

Even with her state employee health coverage, and the ability as a professor to largely control her own work hours, Lugg said her collection of rheumatologic diseases greatly hamper her professionally. She is unable to stand on her feet for long stretches of time, and the physical exertion required to attend all-day research conferences causes her to become “wildly sick,” she added.

Still, Lugg said the flexibility and health coverage her job affords her is an “enormous privilege,” as many others, including her friends, have been forced to put themselves at the mercy of the individual marketplaces. For them, according to Lugg, day-to-day health policy, and the politics associated with them, are a matter of life or death.

“It’s hard for people who generally have not followed the news in their lifetime to all of the sudden be chronically ill,” Lugg said. “That’s terrifying enough, but when you’re facing the possibility that your illness may not be covered by insurance, while some of these medications cost $35,000 to $40,000 a year, it’s horrible. That’s more money than some of these people make, especially for those who make minimum wage. It’s insane. I’ve had a couple of friends die. That is especially important. People die without coverage.” – by Jason Laday