Switching to a biosimilar would be a “feasible treatment choice,” and is associated with maintaining clinical efficacy in patients with noninfectious uveitis who previously received the reference biologic, according to data published in Frontiers in Pharmacology.

“Beyond the significant costs associated with the use of originators, the development of biosimilar products has recently accounted for considerable cost savings and a substantial favorable impact on the health care budget; from this perspective, the number of patients possibly benefiting from an early access to biological treatment could be increased,” Claudia Fabiani, PhD, of the University of Siena, in Italy, and colleagues wrote. “Nevertheless, introducing biosimilar agents to naive patients and switching from the originator to a biosimilar gives rise to different medical liability issues.”

“To date, studies addressing the consequences of the switch from originators to biosimilars have included patients with rheumatoid or psoriatic arthritis, spondyloarthritis and inflammatory bowel diseases,” they added. “Conversely, data related to patients with noninfectious uveitis are limited and the issue about ocular disease control after the switch is currently unexplored.”

To analyze changes in ocular inflammatory symptoms among individuals with noninfectious uveitis who switch from an anti-TNF-alpha originator drug to its biosimilar, Fabiani and colleagues retrospectively enrolled 37 consecutive patients, for a total of 62 involved eyes. The researchers assessed ocular flare frequency before and after switching, best corrected visual acuity (BCVA), central macular thickness (CMT), daily systemic corticosteroid intake and uveitic macular edema (UME) frequency at the switch and at follow-up, compared to the preceding 12 months. 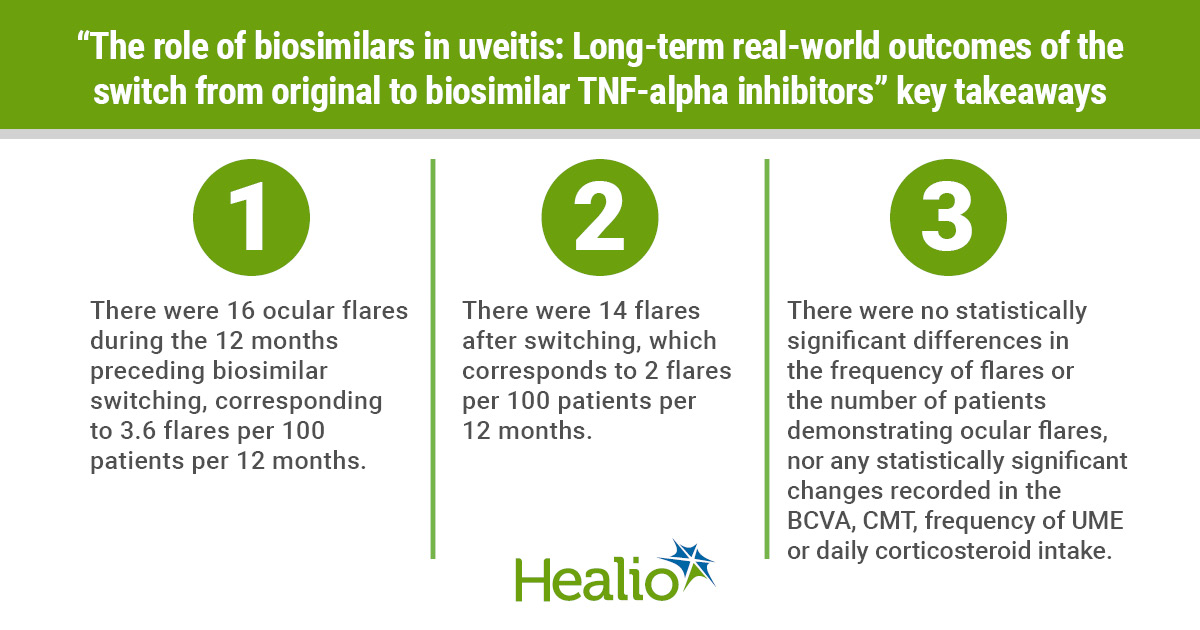 Switching to a biosimilar would be a “feasible treatment choice,” and is associated with maintaining clinical efficacy in patients with noninfectious uveitis who previously received the reference biologic, according to data.

There were no statistically significant differences in the frequency of flares, nor in the number of patients demonstrating ocular flares, between the 12 months preceding the switch and the study period thereafter. There were similarly no statistically significant changes recorded in the BCVA, CMT, frequency of UME and daily corticosteroid intake between biosimilar switching and last follow-up.

“Our results suggest an optimal maintenance of uveitis control following the switch from originators to biosimilars,” Fabiani and colleagues wrote. “In particular, the rate of uveitic flares observed during the 12 months preceding the switch and the subsequent follow-up period were comparable... with no statistically significant differences.

“The switch to biosimilars represents a feasible treatment choice associated with the maintenance of clinical efficacy in patients with noninfectious uveitis previously treated with the corresponding originator anti-TNF-alpha biologic agents,” they added. – by Jason Laday

The study by Fabiani and colleagues shows us what we have come to expect of biosimilars: There is little, if any difference in response and safety between biologic originator compounds and their biosimilars. This has proven true across all approved indications for immune-mediated inflammatory diseases where originator biologic response modifiers have demonstrated a role in therapy.

Rheumatoid arthritis, psoriasis, psoriatic arthritis, inflammatory bowel disease and now uveitis studies have allowed us to conclude that, from a clinical perspective, there is no credible evidence of compromised outcomes in biosimilar-treated patients after being switched off their originator agent.

The slow adoption of biosimilars in the American market should not be the result of fear of loss of effect or a change in the adverse event profile as the data continue to show that these agents work as well as the more expensive originator products. Wholesale switches of patients with RA in Scandinavia have clearly failed to demonstrate any clinical downside. Were it not for the market distortions of PBM and insurer rebates, patient co-pay assistance and formulary restrictions, we would have the chance to bring real savings to the marketplace.

I fear that, given the rapidly escalating costs of biologic drugs, further restrictions on their use will evolve and payers — both government and commercial alike — will impede patient access to biologics and, unfortunately, to the physicians that prescribe them. Responsible physicians need to focus on bringing savings in this arena to the system; the promise of biosimilars provides us with a way of demonstrating our seriousness in doing just that.

TNF inhibitors are the mainstay of steroid-sparing agents in the treatment of non-infectious uveitis. While FDA-approved indications are limited, there is widespread anecdotal, registry, case control and retrospective studies demonstrating the efficacy of these agents in non-infectious uveitis associated with other systemic vasculitis like Behcet’s, spondyloarthritis, RA and IBD.

With the approval of biosimilars, the rheumatology literature has featured studies identifying similarities and differences between the innovator molecules and the biosimilars in terms of safety, efficacy, time to first flare up after the switch; however, data remains limited to the aforementioned conditions.

In this single center retrospective study of non-infectious uveitis, in which patients were switched from innovator biologic to a biosimilar and observed for ocular flares in the 12 months post-switch, the researchers found no statistically significant differences in the rate of uveitis flares, visual acuity, central macular thickness values/uveitic macular edema or steroid doses.

Strengths of this study include provision of data regarding safety and stability when switched from innovator to biosimilar molecules in terms of non-infectious uveitis which would guide therapies in a real-world setting and provide patient/ physician reassurance. Drawbacks, however, including small numbers studied and the retrospective design of the study.

One noteworthy point to be made is that ocular Behcet’s disease had the worse outcomes following the switch to Flixabi (SB2, Samsung Bioepis) from the innovator Remicade (infliximab, Janssen), which the researchers felt was related to worse case ocular conditions at the time of the switch. One could hypothesize that, in these patients with critical ocular illness, perhaps continuation of the originator molecule may be the best course of action.