Adiposity — particularly central obesity — is associated with an increased risk for psoriatic arthritis, according to data published in Arthritis Care & Research.

“Adiposity might be an environmental trigger of PsA in genetic susceptible individuals,” Ruth S. Thomsen, MD, of the Norwegian University of Science and Technology, and colleagues wrote. “There is evidence that physical activity has the ability to modify the detrimental effects of adiposity on CVD and metabolic diseases.”

“It is unknown whether physical activity can affect the ultimate development of PsA in susceptible individuals,” they added. “Also, a potential concern is that physical trauma from vigorous exercise causing mechanical stress could potentially trigger an inflammatory response, such as enthesitis, thereby contributing to the development of PsA.”

To evaluate whether adiposity and the distribution of body fat is associated with the risk for PsA, and if physical activity can alter this risk, Thomsen and colleagues conducted a prospective study using data from the Norwegian HUNT trial, specifically the HUNT2 and HUNT3 surveys. Among the 116,043 total participants, 37,070 were part of both HUNT2, conducted from 1995 to 1997, and HUNT3, performed from 2006 to 2008, and were selected for this study. 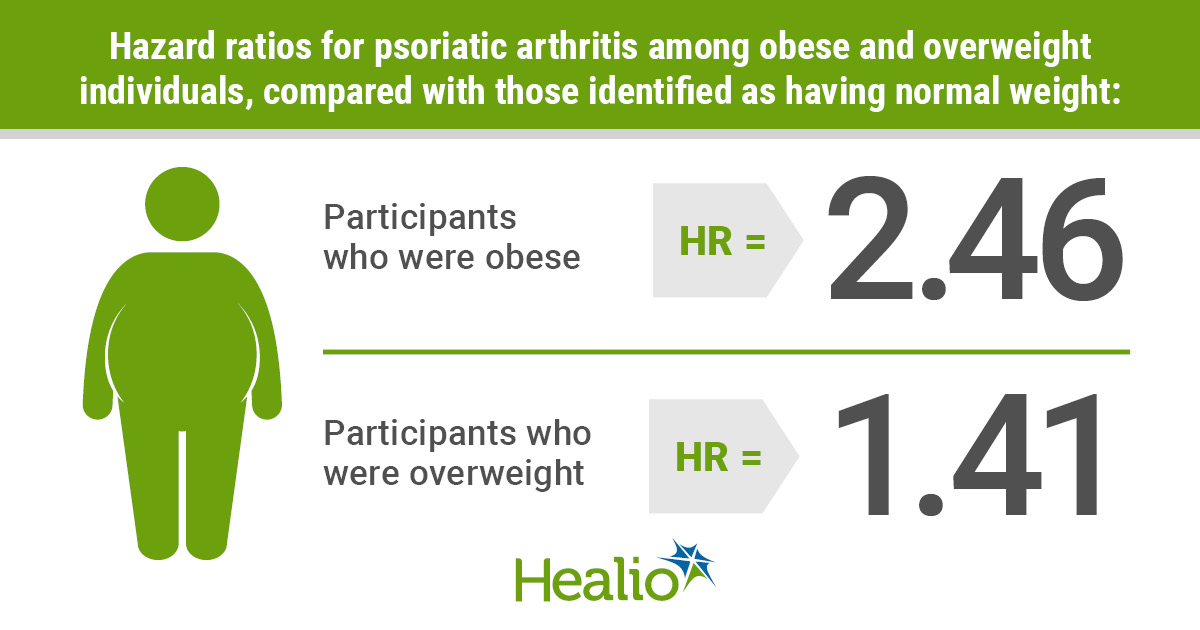 Adiposity — particularly central obesity — is associated with an increased risk for PsA, according to data.

Outcomes included PsA onset between HUNT2 and the follow-up in HUNT3, as well as new cases diagnosed according to hospital records between HUNT3 and 2012. The final analysis of BMI included 36,626 men and women with complete records and without PsA prior to joining HUNT2. Waist circumference and physical activity analyses included 36,595 and 34,834 participants respectively, due to missing data. The researchers used Cox regression to estimate HRs of incident PsA.

“The results from this population-based longitudinal study indicate a positive association of adiposity, and in particular central obesity, with the risk of incident PsA,” Thomsen and colleagues wrote. “Although there was no clear modifying effect of physical activity on adiposity, individuals performing high level physical activity had a reduced risk of PsA, regardless of BMI. Thus, our study adds to the growing evidence that the risk of PsA is modifiable and highlights the importance of preventive work against obesity as well as encouraging physical activity in order to reduce the incidence of PsA.” – by Jason Laday