All biologics increase risk for tuberculosis

Among patients with rheumatic diseases, treatment with any biologic increases the risk for tuberculosis, both reactivation and new-onset, with an incidence rate among biologic users that is 10 times higher in South Africa than in European countries, according to data published in Annals of the Rheumatic Diseases.

“The incidence rate of TB in anti-TNF users has been reported from registries in Europe and strategies for prevention of reactivation TB have been proposed,” Clive Pettipher, MBBCh, MMed, FCP, of Busamed Paardevlei Hospital, and Romela Benitha, MBBCh, of Wilgeheuwel Hospital, both in South Africa, wrote. “Monoclonal TNF inhibitors are consistently reported to have higher TB infection rates than etanercept, a soluble TNF receptor; however, non-TNF inhibitors have not been evaluated.”

“Screening for [latent TB infection (LTBI)] was not mandatory in some countries and rheumatic disease other than rheumatoid arthritis (RA) were not always considered,” they added. “Screening for LTBI is strongly advocated by the South African Rheumatism and Arthritis Association (SARAA).” 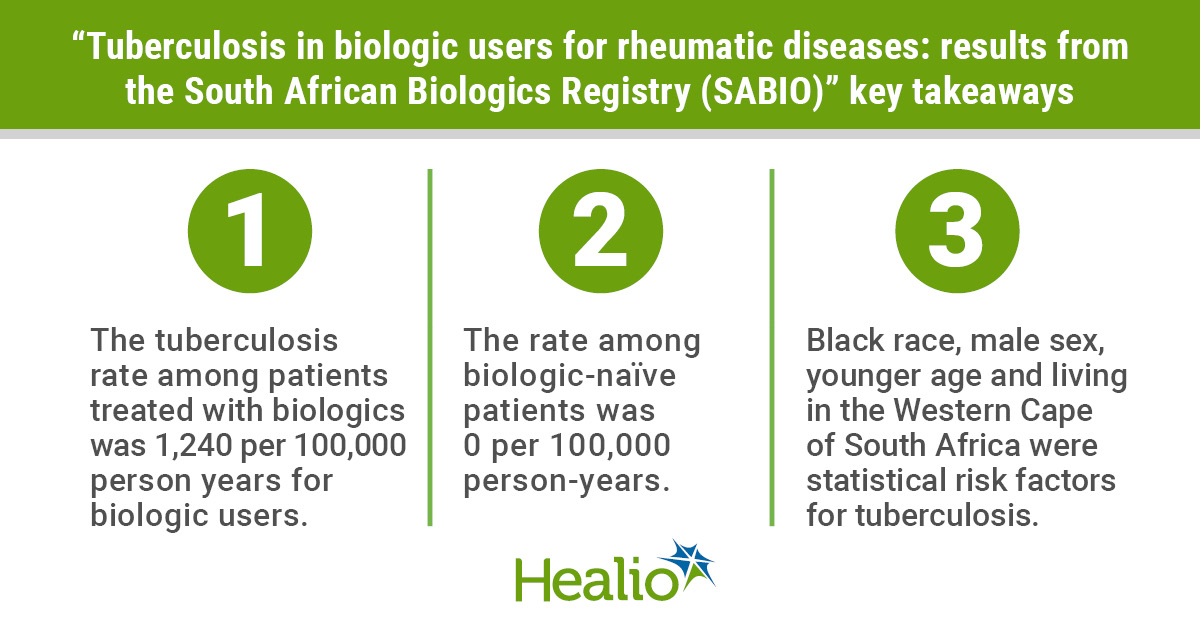 To examine the tuberculosis rate among patient treated with biologics for rheumatic diseases in South Africa, as well as the risk factors and outcome, Pettipher and Benitha collected data from the South African Biologics Registry (SABIO). According to the researchers, the database is a national, prospective observational registry established in 2008, which includes all patients upon starting their first biologic. The registry was later updated in January 2013 to include a biologic-naive cohort comprising patients who declined treatment with biologics due to cost, side effects, pregnancy, or other reasons.

In addition, participants in the registry complete a standardized follow-up questionnaire every 6 months. The survey asks participants to report on disease activity, treatment changes and adverse events. For their study, Pettipher and Benitha included a total of 4,830 patients who started biologics from 2008 to July 2017, as well as 152 biologic-naive patients, in their analysis. They recorded demographic information, as well as LTBI screening and treatment, biological and DMARD therapies, diagnoses and outcomes. Patient-reported tuberculosis cases were only included if confirmed by a rheumatologist.

According to the researchers, there were 96 cases of tuberculosis in 95 patients recorded from 1999 to June 2017. These cases included 55 in patients with rheumatoid arthritis, 27 with ankylosing spondylitis, four with psoriatic arthritis and 10 with juvenile inflammatory arthritis. The tuberculosis rate among patients treated with biologics was 1,240 per 100,000 person years, compared with 0 per 100,000 person-years among those not exposed to biologics, with an incidence rate difference of 0.0124 (P < .0001).

The incidence rate ratio for monoclonal inhibitors compared with etanercept was 1.96 (P = .005), and 2.47 (P = .002) compared with non-TNF inhibitors. There was no significant difference between non-TNF inhibitors and etanercept (P = .336). Among the 12.9% who screened positive for LTBI, 14 were ultimately diagnosed with the disease. Black race, male sex, younger age and living in the Western Cape of South Africa were statistical risk factors for tuberculosis. In addition, there were two cases of drug resistant tuberculosis and six deaths.

“TB risk stratification prior to commencement, screening for LTBI and adherence to SARAA treatment recommendations are strongly advocated,” Pettipher and Benitha wrote. “The majority of biologic users in [South Africa] are socioeconomically advantaged; however, prescribing these agents in higher TB risk communities is concerning and therefore managing their disease remains an unmet need.” – by Jason Laday

The results of this study reinforce what we already know: That biologic medications increase the risk of TB in patients receiving them, and that screening for TB is imperative. However, one key takeaway from this study is that while monoclonal TNF inhibitors are reported to have higher TB infection rates when compared to etanercept (a soluble TNF receptor), non-TNF inhibitors also showed an increased risk not statistically different to the risk associated with etanercept. Therefore, it is important to screen all patients receiving biologic treatments both prior to initiation of treatment and yearly thereafter.

It can sometimes be a challenge for patients to understand why we are testing for TB, as many believe that the disease simply doesn’t exist today — this is where education plays a key role. While places like South Africa, where the study was conducted, has one of the highest TB prevalence rates in the world, in the United States, the CDC reports approximately about 13 million people are living with latent TB infection with 9,000 cases of active TB reported in 2018. While the U.S. numbers may not be staggering, it is important to educate patients on their increased risk for TB and other infections while on biologic treatments for their disease.