Ustekinumab beneficial through 1 year in SLE

Ustekinumab provides sustained clinical benefits through 1 year among patients with systemic lupus erythematosus, with a safety profile similar with its other indications, according to data published in Arthritis & Rheumatology.

“Treatment options for SLE remain limited,” Ronald F. van Vollenhoven, MD, PhD, of Amsterdam University Medical Centers, told Healio Rheumatology. “Patients with lupus often suffer from persistent or recurring symptoms, most often inflammation of the joints and skin eruptions. The use of corticosteroids is associated with many side effects, and older immunosuppressants are often only partially effective. Only one more modern drug has been approved in recent times — belimumab, or Benlysta [GlaxoSmithKline] — but for many patients it is not sufficiently effective.”

To examine the efficacy and safety of sustained ustekinumab (Stelara, Janssen) treatments through 1 year, van Vollenhoven and colleagues conducted a randomized, placebo-controlled, multicenter phase 2 trial. According to the researchers, their 1-year findings were part of a larger study, which had previously found that, through week 24, patients treated with ustekinumab in addition to standard-of-care therapy had significantly greater improvements in global SLE disease activity measures compared with patients receiving standard-of-care therapy plus placebo.

For their study, the researchers randomly assigned 102 adults aged 18 to 75 years with clinically active SLE — despite background therapy — to one of two treatment groups, with 60 patients receiving ustekinumab and 42 receiving placebo. In the ustekinumab group, patients received an IV infusion of approximately 6 mg/kg at week 0, followed by 90 mg subcutaneous injections every 8 weeks beginning at week 8. At week 24, participants in the placebo group crossed over and began receiving subcutaneous ustekinumab 90 mg every 8 weeks. The original ustekinumab group continued their regimen through week 40. 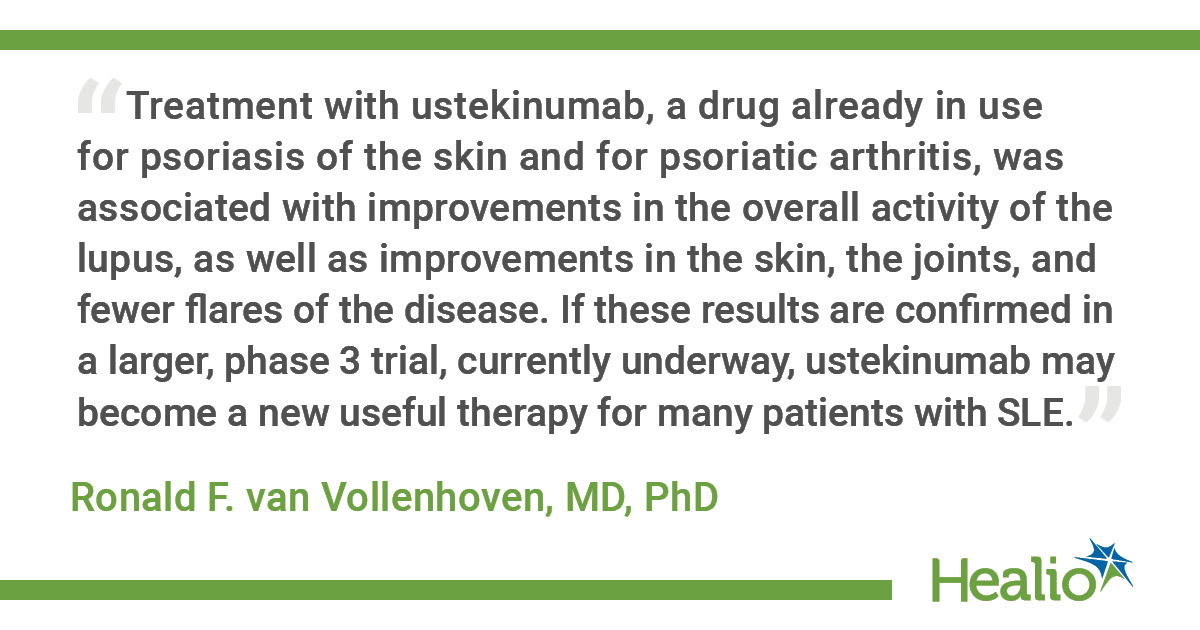 Ustekinumab provides sustained clinical benefits through 1 year among patients with SLE, with a safety profile similar with its other indications, according to data.

According to the researchers, SRI4 response rate was 62% among patients in the ustekinumab group, compared with 33% among those who received a placebo in the week-24 primary endpoint analysis (P = .006). This result was maintained by week 48, with an SRI4 response rate of 63.3% among those treated with ustekinumab. Response rates across other disease measures were similarly maintained among participants who received ustekinumab through week 48, the researchers wrote.

Among the 33 patients in the placebo group who crossed over to ustekinumab, there were increased response rates across efficacy measures. Among all ustekinumabtreated patients, 81.7% demonstrated at least one adverse event, and 15.1% had at least one serious adverse event through week 56. There were no deaths, malignancies, opportunistic infections or cases of tuberculosis.

“The trial showed that treatment with ustekinumab, a drug already in use for psoriasis of the skin and for psoriatic arthritis, was associated with improvements in the overall activity of the lupus, as well as improvements in the skin, the joints, and fewer flares of the disease,” van Vollenhoven said. “If these results are confirmed in a larger, phase 3 trial, currently underway, ustekinumab may become a new useful therapy for many patients with SLE.” – by Jason Laday