Intense dust cloud inhalation, as well as PTSD, experienced by first responders and community members present at the Sept. 11 terrorist attack in New York are associated with a significant increased risk for systemic autoimmune disease, including rheumatoid arthritis and lupus, according to findings published in Arthritis & Rheumatology.

“We began to explore this topic for a number of reasons,” Sara A. Miller-Archie, MPH, and James E. Cone, MD, MPH, both of the New York City Department of Health and Mental Hygiene, told Healio Rheumatology in an interview. “First, we had been approached by enrollees in the World Trade Center Health Registry (WTCHR) who were concerned about autoimmune diseases in their community. Second, we knew that prior studies had linked components of the 9/11 dust cloud to autoimmune diseases in other populations with different exposures.”

“We also knew of multiple studies that had observed an association between PTSD, which is one of the most common 9/11-associated mental health conditions, to the onset of autoimmune disease,” they added. “Third, researchers at the Fire Department of the City of New York (FDNY) had found that — among their firefighters and EMS personnel who had been part of the 9/11 rescue, recovery, and clean-up effort — those with prolonged work duration or more intense exposure were more likely to develop a post-9/11 systemic autoimmune disease.”

To examine whether dust exposure and PTSD were linked to an increased risk for systemic autoimmune disease among those exposed to the Sept. 11 attack and first responders, Miller-Archie and colleagues polled and reviewed medical data for enrollees of the WTCHR. According to the researchers, the registry is a longitudinal, prospective cohort of 71,426 individuals who were exposed to the Sept. 11 attack or involved in rescue, recovery or clean-up efforts. Enrollment occurred in 2003 to 2004, with subsequent follow-up surveys in 2006 to 2007 and 2011 to 2012. 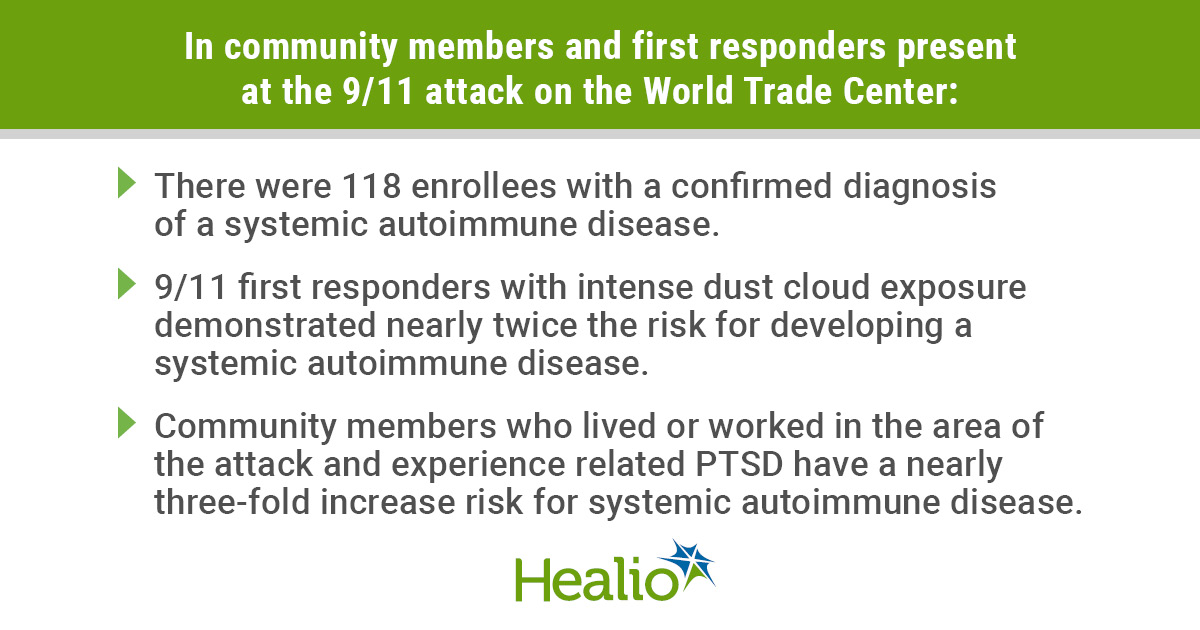 Intense dust cloud inhalation, as well as PTSD, experienced by first responders and community members present at the Sept. 11 terrorist attack in New York are associated with a significant increased risk for systemic autoimmune disease, including rheumatoid arthritis and lupus, according to findings.

For their study, Miller-Archie and colleagues included all adults who reported on the 2011 to 2012 survey that they had been told by a health professional after 2001 that they had rheumatoid arthritis or another autoimmune disorder. Among the 43,133 enrollees examined, 2,786 self-reported developing a systemic autoimmune disorder since 2001. The researchers were able to secure consent from 1,041 of these individuals to confirm their diagnoses. The 37,017 enrollees who denied having an autoimmune disease were used as control participants.

The researchers used multivariable logbinomial regression to examine the link between multiple Sept. 11 exposures and the risk for postattack systemic autoimmune disorders, stratifying by responders and community members.

According to the researchers, there were 118 enrollees with a confirmed diagnosis of a systemic autoimmune disease. In total, there were 71 patients with rheumatoid arthritis, 22 patients with Sjgren’s syndrome, 20 patients with systemic lupus erythematosus, nine patients with myositis, seven with mixed connective tissue disease and four with scleroderma.

“Our study was the first one to look at both community members and the broader group rescue/recovery/clean-up workers,” Miller-Archie and Cone said. “Additionally, this study is one of the largest if not the largest study to date of autoimmune diseases following a disaster or other environmental exposure.”

In this study, researchers identified that autoimmune diseases and PTSD are more prevalent in those exposed to the intense dust cloud resulting from the Sept. 11 terrorist attack. For rheumatology clinicians, this makes perfect sense.

Although rheumatic diseases are known to have many predisposing factors, the cause of these diseases remains unknown. Studies have shown that autoimmunity can begin following serious infection or severe emotional upset but also can be a consequence of environmental factors, such as smoking or exposure to certain chemicals found in pesticides and fine particulate matter.

For our patient population, chronic inflammation and increased immune response may be enhanced by emotional conditions, such as depression, anxiety and PTSD. The pathophysiology of behind why stressful situations and exposure to certain environmental elements is associated with rheumatic diseases has yet to be identified, but this revelation may be a potential piece of the complex mystery surrounding autoimmune disease.

This was an eye-opening article: How would the 9/11 terrorist attacks on the World Trade Center lead to the development of systemic autoimmune disease (SAID)?

The researchers present two presumptive basic mechanisms. The first is the dust cloud that was generated when the towers collapsed, composed mainly of crystalline silica, a known risk factor for autoimmune disease, although other substances present have also been associated with SAID. The second factor was the development of post-traumatic stress disorder (PTSD). I wasn’t aware that PTSD had been associated with SAID but this has been shown in previously in war veterans.

The CDC reported that “approximately 70% of the buildings’ structural components were pulverized in the fiery collapse of these towers… It is estimated that hundreds of thousands of people were exposed, with the most highly exposed group being the rescue, recovery and cleanup workers.

Additionally, the CDC noted that “the fires at the site created toxic combustion products, such as polycyclic aromatic hydrocarbons, dioxins, volatile organic compounds, and various other known carcinogenic compounds. Contaminants such as asbestos, hydrochloric acid, PCBs (Polychlorinated biphenyls), silica and heavy metals were found in the dust and ash resulting from the World Trade Center collapse.” Acute silica dust exposure can cause fever, dyspnea, and chest pain, and 15-20 years of chronic silica exposure can result in silicosis, according to OSHA.

In this study, researchers observed a 10% increase in SAID risk per month worked at the site, although this increase was not significant. Intense dust cloud exposure was significantly associated with the subsequent development of SAID. However, the researchers cannot exclude that PTSD was also involved in some of these individuals. The association of SAID was stronger in those exposed to dust without PTSD than in those with PTSD alone. Other studies have reported sarcoidosis in the workers exposed to the World Trade Center, which was not reported here.