The Not So Golden Age of Rheumatology Therapy

Treatment options for rheumatoid arthritis have changed drastically over the past 30 years, but some of today’s rheumatologists can still remember studying — and, more rarely, using — gold injections as a treatment for RA. A peek into the history of this treatment reveals a treasure trove of interesting ideas that connected various gold treatments to rheumatology, despite the often toxic results.

“Gold salts was the standard therapy for patients who had progressive disease in rheumatoid arthritis, and it was the mainstay of therapy for 30 years, at least, in the United States — perhaps longer in Europe and other parts of the world,” Simon M. Helfgott, MD, associate professor in the division of medicine, rheumatology, immunology and allergy at Harvard Medical School, told Healio Rheumatology.

In the 1920s and 1930s, RA was considered a manifestation of tuberculosis affecting the joints, so while searching for a way to ease the pain for arthritis patients, naturally the medical community turned to the most common treatment for TB. 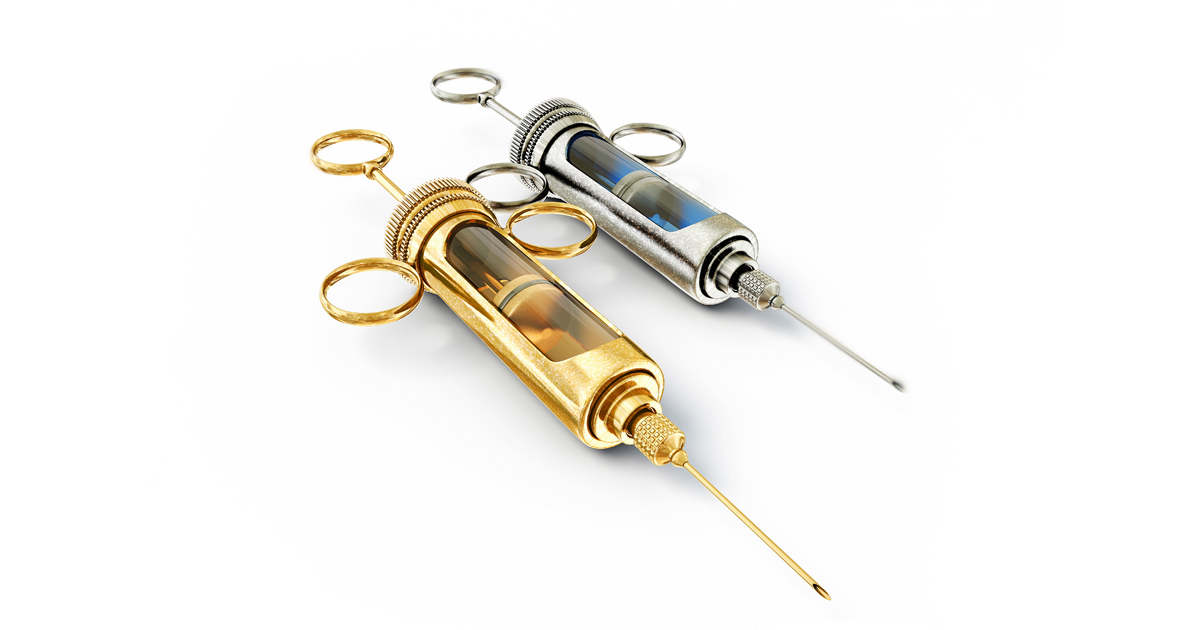 “Heavy meals were the original therapies to treat tuberculosis,” Helfgott said. “Before we had drugs to treat TB, like antibiotics, doctors used arsenic, silver and gold. Gold especially seemed to be best tolerated — better than arsenic, I guess — and it actually helped some patients with TB go into remission,” Helfgott said. “There were a few people in France who pushed this theory and it caught on like wildfire, because there was really nothing else available at the time except aspirin. Word got out and very quickly, within a matter of 10 to 15 years, the whole world was using gold.”

One of the earliest recorded reports of use was a 1932 article in the Lancet in which French physician Jacques Forestier wrote that he had begun treating RA patients with gold salts in 1928. Forestier noted this treatment had been used for pulmonary tuberculosis since 1914, and said he was inspired to try the treatment for RA because of “a certain amount of similarity between [pulmonary tuberculosis] and rheumatoid arthritis – its impairment of the general condition, anemia, leukocytosis and temperature.”

Prior to the use of gold salts, practitioners could only treat symptoms and offer minimal relief salicylates (the precursor to NSAIDs), analgesics and recommendations for bedrest, splinting or physical therapy, according to a 2012 article in Rheumatology. Gold was thus one of the first .

For patients in pain, gold was the first solution. “Some of the joint pains were relieved with gold,” Alexa Meara, MD, assistant professor of immunology and rheumatology at Ohio State University Wexner Medical Center. But the reason gold had this effect remains largely a mystery. Generally, it appears to have an anti-inflammatory effect which may be caused by its interference on macrophages, cells that Helfgott described as “sort of the garbage collector in the immune system.”

The majority of gold treatment for was delivered by injection, with shots administered weekly, tapering over time to occur less and less frequently. The process was arduous, according to Clifton O. Bingham, III, MD, director of the Johns Hopkins Arthritis Center. “We used to have gold clinics where people would come in once a week for their injection and, every time, you would get a urinalysis and a blood count on them before you gave the shot of gold. So you’d draw the blood, you’d wait for the blood count to come back, you’d wait for the urine test to come back, and then if everything was OK, you’d administer the shot,” he said.

Helfgott added, “One of the things we were always taught was that if the gold shots worked well, you should never stop them because if you stopped them, it could all come back and the gold won’t work the second time around. That was really kind of the holy grail of gold therapy.”

In 1985, gold was developed into a pill form, to ease medication delivery.

“When [the oral form] came out, rheumatologists were actually worried that this was going to really upset things,” Helfgott said. “It was thought that suddenly the primary care doctors would be prescribing these gold pills [and that patients] won’t have to come to us for shots anymore. Some people were actually quite worried that this was really going to interfere with referral patterns.”

They need not have worried. “It actually bonded the drug. It did not work all that well and caused many gastrointestinal side effects,” he said. “It more or less fell by the wayside about 25 years ago and I haven’t seen it used since then. If you were going to give gold, you really had to do it via injection — there was really no other way around it.”

Rheumatologists agreed that there was really only one reason gold was ever used as treatment: the lack of an alternative. Helfgott, who was trained to administer gold therapy during his fellowship, noted gold reached its peak use in the United States in the 1950s and 1960s, and was finally overtaken by better drugs about 30 years ago.

Bingham, who was also trained in gold therapy, referred to this time in history as “the dark days of rheumatology, when we basically treated using alchemy. At the time, it was the best drug we had because some patients would respond to it. The other possibilities at that point in time for treatment of rheumatoid arthritis were limited to sulfasalazine, hydroxychloroquine and penicillamine, which really had almost no therapeutic efficacy.”

Bingham, Helfgott and Meara all noted the toxicity of gold was not worth the pain relief it could offer.

“The toxicity could occur at any time, even among people who had been using the drug for many years, and the toxicities could be considerable,” Bingham said. “There were hematologic toxicities and renal toxicity. In addition, patients who had received large [doses of] gold over a number of years would begin to develop a bluish discoloration to their skin.”

Helfgott noted researchers tried to identify common patient characteristics that might predispose them either to respond effectively to gold or experience the side effects of toxicity, but never got very far.

“Some literature that came out later that showed that certain HLA genes were associated with certain side effects, such as nephrotoxic side effects from gold shots, but we never identified a pattern that could tell us who would benefit from gold therapy,” he said. However, he added, “That is no different than our current situation; we are still in that situation where there is more guesswork. You just try it because you don’t have anything else to offer or you think it might work for that patient, so you try it and see if it works.”

Beneficial Alternatives Come on the Scene

The final death knell sounded for gold therapy with the advent of methotrexate, which was approved for use in treating RA by the FDA in 1988, as reported by Rheumatology.

“The world really changed in about 1993 when it was recognized that higher doses of methotrexate — at least 15 mg per week, up to 25 mg per week — were efficacious in the treatment of rheumatoid arthritis, and methotrexate became the standard of care,” Bingham said, adding, “Our gold clinic disappeared with methotrexate.”

The ultimate benefit methotrexate offered over gold was a marked decrease in toxicity, and rheumatologists continued to treat patients who did not respond to methotrexate, but alternatives began popping up more frequently as the field of rheumatology began “truly understanding the pathophysiology [of RA], involving chemistry and cytokines and understanding the different aspects of cells,” Meara said.

The late 1990s brought along biologic DMARDs. As Meara noted, a deeper understanding of cells allowed rheumatologists to begin targeting specific mediators involved in inflammation, beginning with TNF inhibitors and expanding to include a T-cell co-stimulation blocker and a B-cell depleting agent.

The time period beginning with methotrexate approval and leading into use of biologics changed the field of rheumatology, according to Bingham. “The treatment paradigm totally shifted,” he said. “Methotrexate remains an effective drug for many patients. Now that we have the advent of biologics and targeted synthetic DMARDs, we have even more options available. For the vast majority of patients, we can achieve good responses to their rheumatoid arthritis.”

Thanks to both methotrexate and biologic alternatives, Helfgott said, “even if gold shots were not toxic, based on the efficacy alone, there would be no indication to continue using them nowadays, because we have so many better drugs.”

“In the end, so few people actually benefited from gold. But when it worked it was a marvelous drug. Three to five percent of patients had really tremendous benefits which we could never translate into other, updated versions of the product,” Helfgott said. “Gold was gold, it was just a magical thing. However, once it fell by the wayside, it stayed there.” – by Amanda Alexander