Four weeks of active transcutaneous electrical nerve stimulation, or TENS, can significantly improve pain triggered by movement and other clinical outcomes among women with fibromyalgia, according to data published in Arthritis & Rheumatology.

“Pain and fatigue are two symptoms in this population that interfere with their ability to participate in daily activities and exercise, an effective treatment in this population,” Kathleen A. Sluka, PT, PhD, FAPTA, of the Carver College of Medicine at the University of Iowa, told Healio Rheumatology. “This study shows that TENS use at home during activity improved both pain and fatigue in people with fibromyalgia when compared to placebo or no TENS.”

“The TENS treatment was given in addition to standard treatments for fibromyalgia,” she added. “Thus, this treatment can provide people with an additional tool to help manage pain and fatigue without taking additional pain medications.”

To analyze whether using TENS while active improves movement-triggered pain among women with fibromyalgia, Sluka and colleagues conducted a phase 2, double-blind study of patients at the University of Iowa and Vanderbilt University Medical Center. Women aged 18 to 70 years with confirmed fibromyalgia and stable medication were randomized to receive one of three treatments, with 103 participants treated with active TENS, 99 receiving placebo TENS and another 99 receiving no TENS at all. 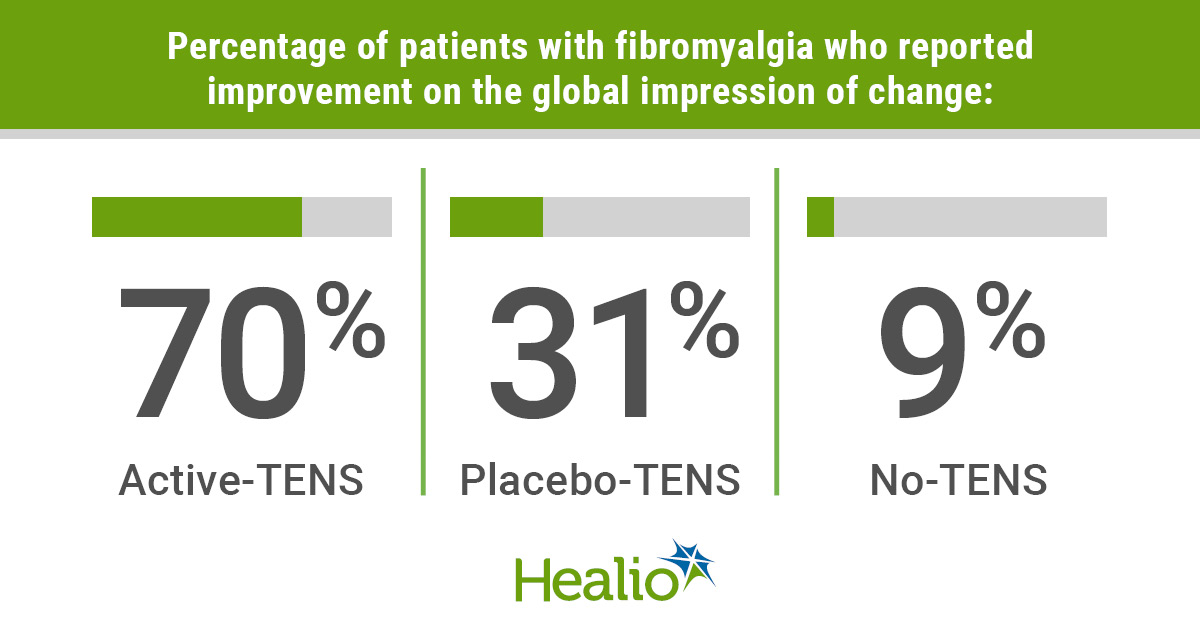 Four weeks of active transcutaneous electrical nerve stimulation, or TENS, can significantly improve pain triggered by movement and other clinical outcomes among women with fibromyalgia, according to data.

Participants were instructed to use their TENS system at home for 2 hours per day during activity, for 4 weeks. In the active TENS group, the system was applied to the lumbar and cervicothoracic regions using a modulated frequency of 2 to 125 Hz at the highest tolerable intensity. Those in the placebo TENS group received a unit that was identical to the active system and delivered current for 45 seconds, tapering down to 0 in the 15 seconds. Participants in the no-TENS group were given a mock unit with electrodes that provided no current intensity.

The primary outcome was patient-reported movement-triggered pain and fatigue, based on an 11-point scale, before and during TENS use. Reported outcomes were evaluated at randomization and 4 weeks.

In addition, 70% of those in the active-TENS group reported improvement on the global impression of change, compared with 31% of participants in the placebo group (P < .0001) and 9% of those in the no-TENS group (P < .0001). No TENSrelated serious adverse events were reported, and less than 5% of participants who used TENS experienced minor adverse events.

“Importantly we show an effect on movement pain, which is particularly problematic in this population, and interferes with participation in activities,” Sluka said. “TENS is safe with few side effects and those that do occur are minor. Clinically, TENS is available over the counter, is inexpensive, safe and easy to use. It can provide a self-management option for people with chronic pain, particularly fibromyalgia, to provide an additional level of pain relief.” – by Jason Laday

Fibromyalgia is a very real complex condition characterized by pain, fatigue and significant alteration in an individual’s quality of life. Treatment for fibromyalgia is equally complex, requiring the clinician to find the correct balance between medications, physical therapy, and when necessary, psychological counseling.

Dailey and colleagues took a unique approach to analyzing the effectiveness of using Transcutaneous Electrical Nerve Stimulation (TENS) during activity to reduce movement-evoked pain in woman with fibromyalgia by randomizing the subjects in three groups: TENS, placebo TENS and no-TENS. The results showed statically significant improvement in resting and movement-evoked pain as well as fatigue in the TENS group. Interestingly, there was no change in the use of rescue medication and little improvement in function among all three groups.

These results are promising and may provide another tool for the clinician in treating the pain of fibromyalgia. However, the study raises many more questions, including: How long to treat with TENS for optimal response? At what point can medications be reduced? Will men show a similar response? There remains no clear-cut treatment regime for fibromyalgia but the Dailey study is moving in the right direction.