Among women with fibromyalgia, commute time, work difficulties, limited career progression, repetition and a lack of recognition are all greater independent risk factors for sick leave than any disease characteristics, according to survey findings published in BMC Rheumatology.

“These difficulties may make it difficult for patients to do their jobs and may lead to repeated absences,” they added. “Employees suffering from [fibromyalgia] have been reported to take three times more sick leave than other workers without [fibromyalgia].”

To analyze the risk factors for taking sick leave among professionally active women with fibromyalgia, Laroche and colleagues conducted a cross-sectional descriptive study using a questionnaire developed by pain and occupational physicians, as well as patient organizations. Throughout the 5-month inclusion period, the researchers recruited 955 women in full-time employment, who had been diagnosed using the Fibromyalgia Rapid Screening Tool (FiRST). 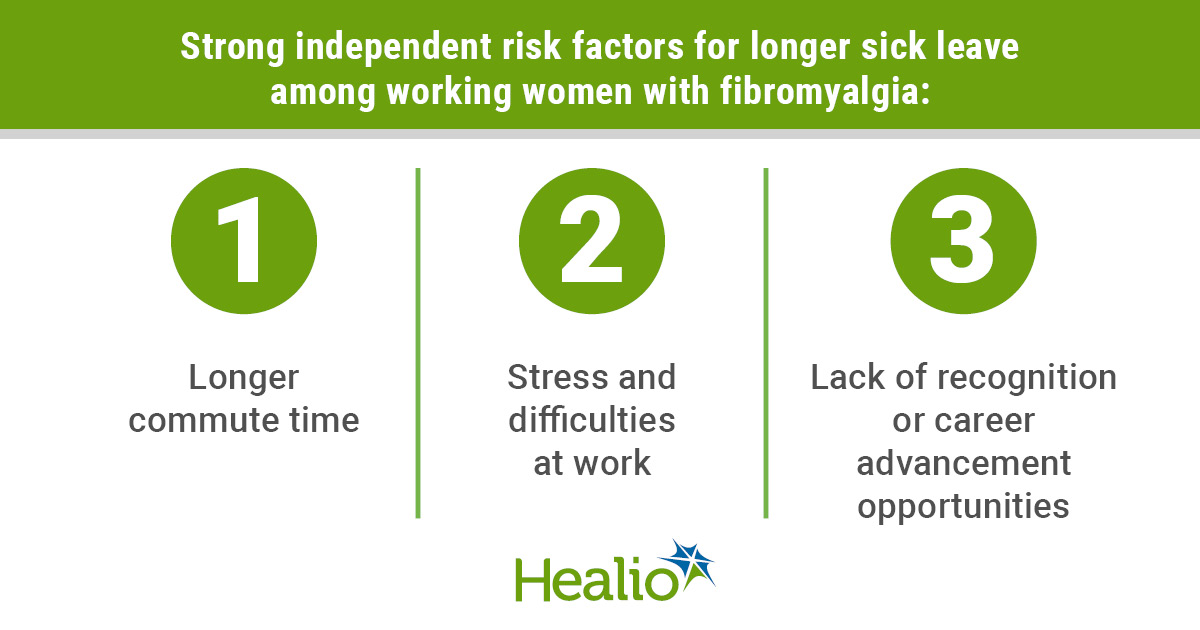 Among women with fibromyalgia, commute time, work difficulties, limited career progression, repetition and a lack of recognition are all greater independent risk factors for sick leave than any disease characteristics, according to survey findings.

The 103-item questionnaire was performed by the SOS Fibromyalgia Association. It was accessible through the websites of the two patient organizations involved with the study — SOS Fibromyalgia and the French League Against Rheumatism (AFLAR) – as well as Facebook. Each participant received written information regarding the study, and was prevented from completing the survey twice through “browser fingerprinting.” All resulting data were analyzed by an independent statistician.

According to the researchers, there was a mean of 37 days of sick leave taken by the 955 participants in the previous year. Among them, 36% took no sick leave, 38% took up to 1 month, 14% took 1 to 2 months and 12% took more than 2 months. The researchers observed no differences in demographic characteristics, fibromyalgia symptoms, functional severity and psychological distress observed across these groups.

However, the groups did in fact differ in terms of workplace characteristics, commute time, stress and difficulties at work, repetitive work, noisy conditions, little opportunity for career progression and a lack of recognition. These were all strong independent risk factors for longer sick leave, the researchers wrote.

“This study of 955 women with fibromyalgia in France is one of the first to describe the socioprofessional and clinical factors associated with sick leave,” Laroche and colleagues wrote. “Our results highlight the predominance of socioprofessional context over clinical and demographic characteristics in the ability of women suffering from fibromyalgia to remain in work. Further studies are required to assess the impact of an early adaptation of working conditions, job description and the development of close professional medical follow-up, on the ability of people suffering from fibromyalgia to remain in employment.” – by Jason Laday

Disclosure: The researchers report that the research and valorization department of Paris Descartes University received 5,000 from the SOS Fibromyalgia Association. Please see the study for all other authors’ relevant financial disclosures.

Although patients who have difficulties with day to day functioning — such as regular attendance of work — may be experiencing an increase in active levels of disease, there may be other factors contributing to absenteeism. Health care providers caring for patients with a variety of rheumatic conditions, with or without fibromyalgia, may gain a more in-depth insight on the effects on disease by simply inquiring about work absenteeism and explore the conditions contributing to absenteeism.

This research article addresses work attendance for patients with fibromyalgia, but this same concept of work attendance may apply to patients with other rheumatic diseases. In the pediatric patient population, similar information may be assessed by asking about school attendance. Regardless of the diagnosis, the first step in gaining this information is to create open dialogue and ask the patient questions about how their condition is affecting aspects of their lives, including work and/or school attendance.

In this study, independent factors such as the type of work, stress at work, and even commute time was shown to have an impact on absenteeism. When engaging in open dialogue with the patient about their work attendance, a provider may gain insight on the nature of the patient’s job and how their current working conditions may be affecting their overall health. Through an open dialogue with the patient, the provider may be able to offer guidance on work modifications as well as ways to deal with workplace stress. Overall, these strategies that may prove to helpful in reducing absenteeism.