Upadacitinib improves signs, symptoms in patients with active AS

ATLANTA — A daily regimen of 15 mg upadacitinib was significantly more effective than placebo in improving signs, symptoms, function and imaging among patients with active ankylosing spondylitis, according to the presenter at ACR/ARP 2019.

“Patients with active AS who have an inadequate response or a contraindication to NSAIDs have limited treatment options, other than biologic DMARDs,” Désirée van der Heijde, MD, PhD, of Leiden University Medical Center, in the Netherlands, told attendees. “However, in recent years, the Janus kinase pathway has emerged as a potential therapeutic target in AS. Upadacitinib, a JAK1 inhibitor, was recently approved by the U.S. FDA for the treatment of rheumatoid arthritis and is being investigated for several other chronic immune-mediated inflammatory diseases.”

To examine the safety and efficacy of upadacitinib (Rinvoq, AbbVie), compared with placebo, among patients with active AS who had not received biologic DMARDs, van der Heijde and colleagues conducted the double-blind, phase 2/3 SELECT-AXIS 1 study. A total of 187 adults with active AS were randomly assigned to receive either 15 mg of daily upadacitinib or placebo. All included participants met the modified New York Criteria for AS based on central reading of radiographs, and demonstrated BASDAI and total back pain scores of 4 or greater, on a 0 to 10 scale, at screening and baseline.

Those included had also not been previously exposed to biologic DMARDs, and demonstrated an intolerance or contraindication to NSAIDs, or an inadequate response to two or more NSAIDs. 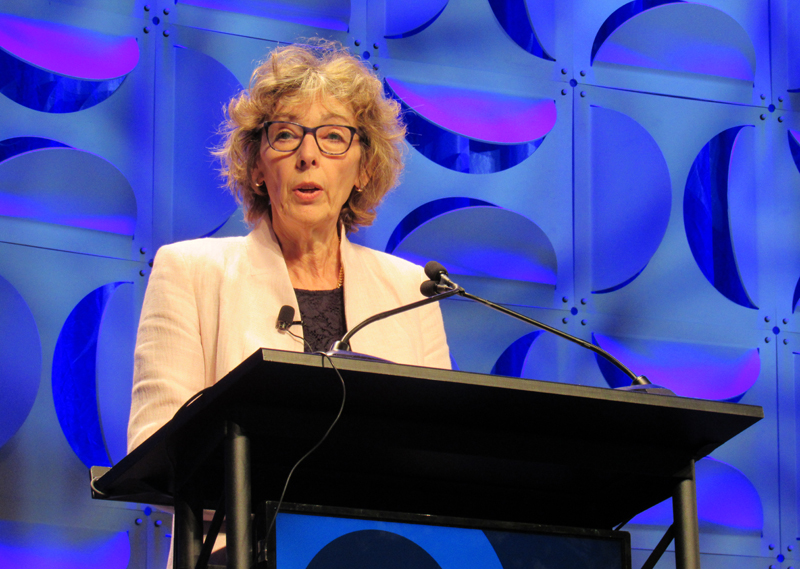 A daily regimen of 15 mg upadacitinib was significantly more effective than placebo in improving signs, symptoms, function and imaging among patients with active AS, according to van der Heijde.
Source: Healio Rheumatology

According to the researchers, 95.7% of randomized participants completed the study through week 14, including 90 patients who received placebo and 89 treated with upadacitinib. Among those who completed the study, 51.6% of those treated with upadacitinib achieved the primary endpoint at week 14, compared with 25.5% of those in the placebo group (P < .001). In addition, after accounting for multiplicity-adjustment, the ASDAS, SPARCC MRI spine, BASDAI50, ASAS partial remission and BASFI secondary endpoints were all statistically significant for upadacitinib at week 14, compared with placebo.

Among the other ranked secondary endpoints, all except WPAI were significant for upadacitinib compared with placebo based on nominal P values. Regarding safety, the proportions of participants who experienced adverse events leading to discontinuation, serious adverse events and infections were similar across both groups. There were no serious infections, herpes zoster cases, malignancies, venous thromboembolic events or deaths reported.

“The study met its primary endpoint of ASAS40 response at week 14 and several multiplicity-controlled secondary endpoints related to signs and symptoms of AS, function and MRI-detected active inflammation at week 14,” van der Heijde said. “Onset of response to upadacitinib 15 mg daily treatment was rapid, with responses observed at early as week 2, and consistently maintained through week 14.”

“The occurrence of adverse events was similar between upadacitinib and placebo, and no new safety signals were observed,” she added. “These results support further investigation of upadacitinib for the treatment of axial spondyloarthritis.”

“We are pleased to be able to bring a new oral treatment option for patients, especially since when NSAIDs are insufficient in controlling the disease — currently approved therapies are either injections or IV infusions,” Pangan said. “These results show improvements in signs and symptoms, disease activity, function and MRI outcomes by week 14.” – by Jason Laday