ATLANTA — Rheumatologists need to suspect inflammatory bowel disease more often in patients who present with joint pain, particularly in the presence of other clues, such as changes in bowel habits, bloody stool and unexplained weight loss, according to a presenter at ACR/ARP 2019.

“Please suspect IBD more often,” David T. Rubin, MD, professor of medicine, codirector of the Digestive Diseases Center, and chief of gastroenterology, hepatology and nutrition at the University of Chicago, told attendees. “If the patient has a change in bowel habits, obviously, but you should be asking about it, because they may be coming to you for something else and it doesn’t come up.”

Rheumatologists should also refer patients to a gastroenterologist if they display either conscious or subconscious unusual elimination dietary habits or nocturnal symptoms, or if they are anemic or demonstrate low vitamin B12, vitamin D or albumin, Rubin added.

“If they have unusual elimination dietary habits, if they tell you that every time they eat x, y or z, they have problems, you should be thinking about whether it’s the bowel and not the actual food, and get them to someone who is going to be able to see them,” he said. “Unexplained weight loss and blood in stools is never, of course, normal. If they are waking up with GI symptoms, it’s not an irritable bowel — they may have been told that because they’re 24 years old — get them to a gastroenterologist.” 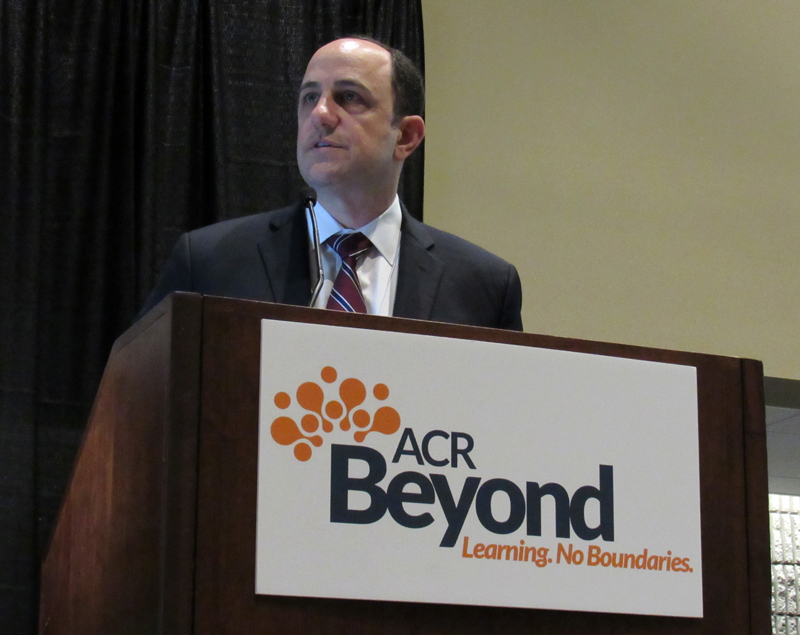 “Look at other clues,” Rubin continued. “Take a look at their bottom. You don’t have to do a complex exam in the office, but if they have any skin tags there that’s a giveaway. You should be worried. It’s not hemorrhoids, that could be Crohn's disease. Check some routine labs — if they are anemic and they have low vitamin B12 or vitamin D, you should really be going to your gastro colleagues for help.”

In treating patients with IBD, Rubin stressed the importance of a quick and accurate diagnosis, paired with a focus on achieving normal bowel function. This included rapidly induced remission, which should be maintained without the use of steroids.

In addition, rheumatologists should keep in mind several unique treatment considerations related to IBD, such as the fact that symptoms do not correlate with bowel inflammation, and that diet is a major perceived contributor to the disease, and often considered a treatment — even without much evidence for its efficacy in adults.

Rubin added that protein loss from the bowel can impact clearance for monoclonal antibodies, and that although surgery is effective, the disease recurs in many patients.

“I hope this has been helpful, seeing where the IBD field is — I think we’ve caught up to rheum in some ways, and we’re still learning from you in others,” Rubin said. “Please suspect this diagnosis in all your patients with joint problems, but especially your spondyloarthropathy patients. Remember that an inflamed bowel can change the pharmacodynamics of therapies, and therefore some of the treatments you are comfortable using may not work the same way — not because of the mechanism necessarily, but because of how the drug is cleared and the way the body reacts to it.” – by Jason Laday

Reference:
Rubin RT. The gut is the center of the universe. Presented at: American College of Rheumatology/Association of Rheumatology Professionals Annual Meeting; Nov. 9-13, 2019; Atlanta.