Patients with the most damage related to systemic lupus erythematosus pay nearly nine times higher cumulative costs over a 10-year period compared with those with the lowest damage, according to findings published in Arthritis Care & Research.

“Organ damage, measured with the Systemic Lupus International Collaborating Clinics (SLICC)/American College of Rheumatology (ACR) Damage Index is an important outcome in systemic lupus erythematosus (SLE), predictive of morbidity and mortality,” Megan R.W. Barber, MD, PhD, of the University of Calgary in Alberta, Canada, and colleagues wrote. “Once present, damage is considered permanent. Damage scores increase in an almost linear fashion in the first 10 years of the disease.”

“Given the irreversibility of damage, with hastened accrual in those of certain race/ethnicity and with higher disease activity and corticosteroid use, and its association with mortality, it is to be expected that damage is an important predictor of long-term health care costs,” they added. “Although a few studies examine the association between damage and costs, the economic impact of damage has never been assessed in a multi-ethnic, international inception cohort such as the SLICC cohort.”

To evaluate the costs associated with various damage states throughout the course of SLE, Barber studied data from the SLICC inception cohort through September 2018. According to the researchers, the SLICC includes patients recruited from 43 academic centers in 16 countries across North America, South America, Asia, Europe and Australia. Between 1999 and 2011, 33 of the included centers, in 11 counties, enrolled a total of 1,848 patients who had been diagnosed with SLE in the past 15 months. These patients were then followed longitudinally for 10 years. 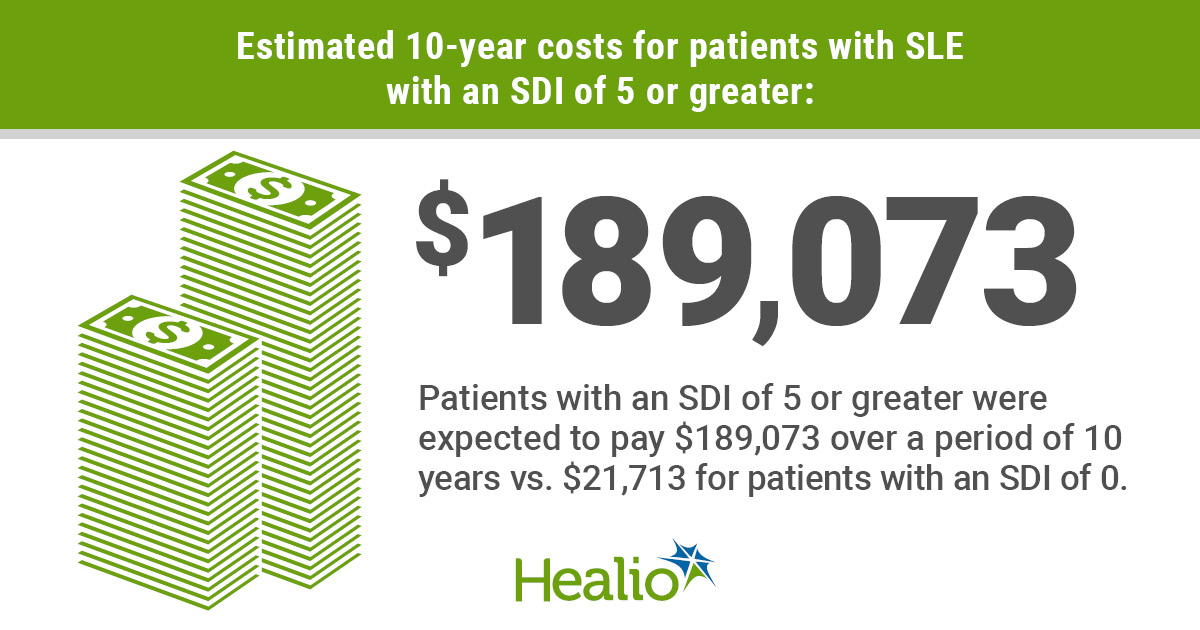 Patients with the most damage related to SLE pay nearly nine times higher cumulative costs over a 10-year period compared with those with the lowest damage, according to findings.

Barber and colleagues included data on 1,687 patients with at least one enrollment visit and one follow up. These patients were located in the United States, Europe, Canada, Mexico and South Korea. The researchers collected and analyzed data on demographics, disease activity, hospitalizations, medications, dialysis and selected procedures. The researchers also assessed damage, based on the SLICC/ACR Damage Index (SDI). In addition, they estimated cumulative costs, in Canadian dollars, through multiplying annual costs associated with each SDI state by the expected state duration using a multistate model.

“Preventing organ damage is an important therapeutic target given that damage accrual predicts morbidity, mortality, and quality of life,” Barber and colleagues wrote. “Our study demonstrates there is also a substantial economic imperative to reducing damage. Cost savings can potentially be achieved by aggressive therapy to mitigate damage accumulation, including better control of disease activity while minimizing use of corticosteroids, and greater attention to monitoring and management of risk factors for comorbidities, such as cardiovascular disease.”

“Hence, it is hoped that with improved use of existing therapies and the advent of agents successfully targeting novel therapeutic pathways, damage accumulation will be substantially reduced,” they added. “Studies, such as ours, which can forecast long-term costs based on damage at disease presentation will contribute to evaluating the cost-effectiveness of existing and novel biologics.” – by Jason Laday