“This is the first study to examine both subjective, or perceived, as well as objective, or performance, aspects of cognitive dysfunction in the daily lives of people with fibromyalgia,” Anna L. Kratz, PhD, of the University of Michigan, in Ann Arbor, told Healio Rheumatology. “Prior to this study, cognitive functioning in fibromyalgia has been studied exclusively in the laboratory, using standard neuropsychological testing protocols, administered by a trained examiner in a quiet, controlled testing environment.”

“The protocols are limited by the artificial testing environment, which is very unlike the natural environment that people live their lives and in which ‘fibrofog’ is experienced,” she added. “The other limitation of lab-based testing is that it is unable to capture natural fluctuations in cognitive functioning. This way of measuring cognitive functioning is in stark contrast to how people experience fibrofog — reporting good times, when their thinking is relatively fast and clear, and bad times, when their thinking is foggy and slow.”

To analyze cognitive function, as well as the association between subjective and objective aspects of cognition, among patients with and without fibromyalgia, Kratz and colleagues recruited 100 adults from the University of Michigan. Among the participants, 50 had a diagnosis of fibromyalgia while the remaining 50 were controls who were matched based on age, sex and education. 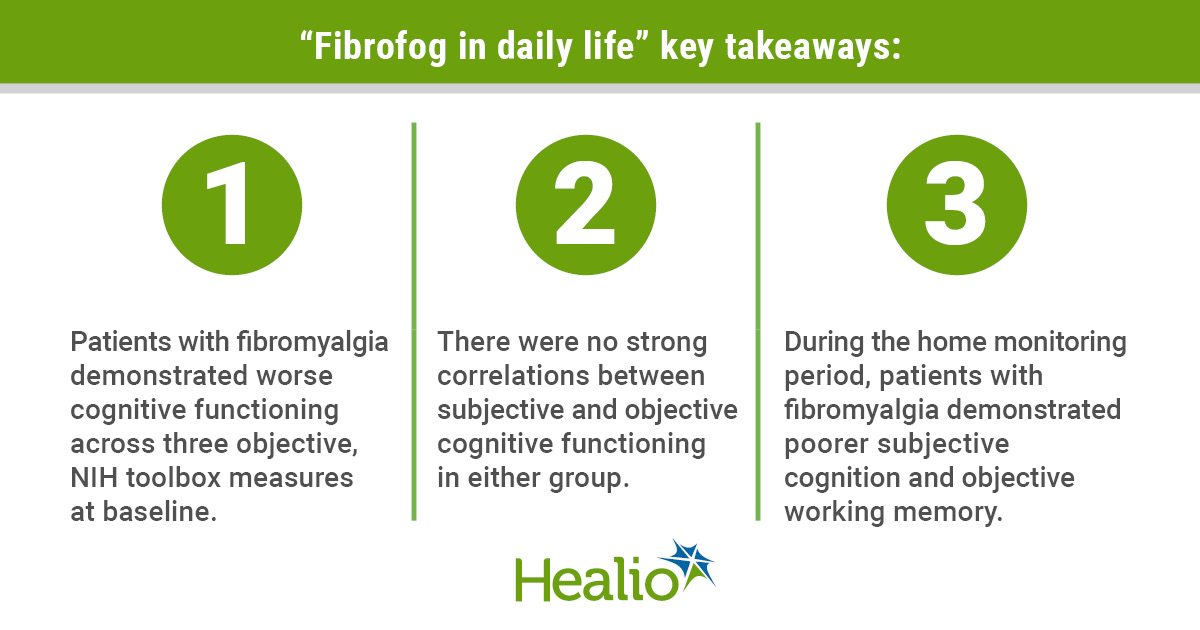 Patients with fibromyalgia demonstrate worse objective and subjective cognitive function — sometimes called “fibrofog” — compared with individuals without the disease, according to data.

Prospective participants were excluded if they had a comorbid neurological, learning or cognitive disorder or impairment, current recreational alcohol or drug use, a history of prolonged substance dependence, visual or hearing impairment, untreated obstructive sleep apnea or an abnormal sleep pattern.

All participants completed a 90-minute baseline visit, in which patients and control individuals answered a collection of self-report measures, as well as standardized cognitive

testing using four NIH toolboxes, and were then given a smartphone for the subsequent home monitoring period. During this home monitoring period, and using a smart phone app, the participants completed ecological momentary assessments of cognitive clarity, processing speed and working memory five times a day for 8 days. Participants returned the phones at the end of the home period.

“We moved the testing into the natural, lived environment by administering the surveys and cognitive tests on a mobile phone app ... to get a better understanding of cognition where it matters most for people — in their daily lives,” Kratz said.

During the at-home monitoring period, patients with fibromyalgia demonstrated poorer subjective cognition and objective working memory, compared with those without fibromyalgia. However, the two groups did not differ on processing speed. Momentary ratings of subjective cognitive dysfunction were significantly associated with changes in objective processing speed, but not working memory.

“One of the critical findings from our study is that people with fibromyalgia demonstrated worse subjective and objective cognitive functioning in daily life, compared with people of the same sex, age and education level without fibromyalgia,” Kratz said. “Another important finding challenges the notion that people with fibromyalgia are especially sensitive to changes in their cognition or are over-reporting the extent of their cognitive problems.”