Patients presenting to the ED with chronic fatigue syndrome may receive inappropriate care due to a widespread misunderstanding of this condition among health care workers, according to researchers at Georgetown University Medical Center.

Despite being one of the most common chronic conditions, chronic fatigue syndrome remains one of the most difficult to diagnose, due in part to the loose confederation of nonspecific symptoms associated with this condition, including fatigue, musculoskeletal pain and insomnia. Like related disorders, such as fibromyalgia, chronic fatigue remains shrouded in uncertainty, most notably among general practitioners and physicians unaccustomed to seeing it.

To examine the experiences of patients with physician-diagnosed chronic fatigue syndrome (CFS) in the ED setting, James N. Baraniuk, MD, professor of medicine in the division of rheumatology, immunology and allergy at Georgetown University, and Christian Timbol, MD, an emergency medicine resident physician at Thomas Jefferson University Hospital in Philadelphia, conducted a survey of 282 participants, specifically regarding the encounters they had with health care professionals. Symptoms of the condition were quantified using a severity score. 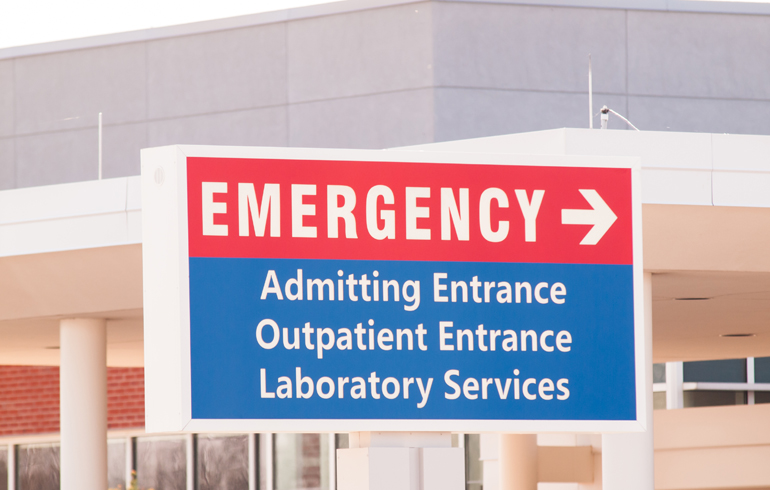 Patients presenting to the ED with chronic fatigue syndrome may receive inappropriate care due to a widespread misunderstanding of this condition among health care workers, according to researchers.
Source: Adobe

The researchers reported that 59% of the individuals in the cohort reported visiting an ED, with 33% of these patients found to exhibit symptoms consistent with orthostatic intolerance. However, Baraniuk and Timbol determined that ED physicians dismissed 42% of those individuals with psychosomatic complaints. In the survey, patients reported that ED staff had insufficient knowledge of CFS, scoring encounters at 3.6 on a 10-point scale in terms of favorability.

Attitudes among the remaining 41% of the cohort who did not visit an ED were equally telling: Patients indicated that they would not go to an ED because they either believed they would not be “taken seriously” or had a previous unsatisfactory experience.

Healio Rheumatology spoke with Baraniuk about properly identifying chronic fatigue syndrome, barriers to effective treatment, and how ED staff can improve their knowledge of the condition.

Q. How do you differentiate chronic fatigue syndrome from other types of fatigue?

Baraniuk: Fatigue is a common experience in life. If you go out and cut down a tree, you will experience fatigue; but then you go to bed, get a refreshing night’s sleep, go back out in the morning and chop down another tree. Fatigue is a good thing in this situation because your brain is telling your body to rest, recover and recuperate for another day. However, someone with CFS will have fatigue that may be delayed in onset, will not have refreshing sleep and may not be able to get out of bed because of total body pain. CFS may be accompanied by “brain fog” that is marked by clouded thinking, concentration and memory. This disability may last several days before returning to usual levels of fatigue, pain and slow thinking. This profound effect after exertion is post-exertional malaise or exertional exhaustion.

Some people will experience fatigue every day, but lack the corresponding pain or brain fog — this is indicative of chronic idiopathic fatigue. The elderly can also develop this type of overwhelming tiredness.

Chronic fatigue syndrome is diagnosed by having at least 6 months of disabling fatigue that has been evaluated by a doctor and found not to be the result of any medical or psychiatric disease. In addition, the person must have moderate or severe symptoms in at least four of eight other categories including: cognition with poor concentration and short-term memory; post-exertional malaise; sleep disruption; generalized total body muscle pain; pain in numerous joints but without redness or swelling; headaches that are often migraine or chronic daily headaches; chronic recurrent sore throat; and chronic recurrent tender lymph nodes.

The sore throat and lymph nodes are included because the symptoms may seem like a bad influenza-like illness that never goes away or just keeps coming back. There is also a suspicion that chronic viral infections are the cause in some people, but no single virus has been identified. There have been some outbreaks of flu-like illnesses that lead to CFS, most notably the 1984 outbreak of fatigue symptoms among 160 residents of Incline Village, Nevada as well as a fatigue epidemic in the town of Akureyri in northern Iceland during the winter of 1948, today known as Akureyri disease or “Iceland disease.”

Perhaps 5% to 10% of patients with CFS have a documented infectious disease that turns into CFS; Epstein-Barr virus in adolescents is the best example of this. The pattern of fatigue and other eight symptoms is important for proper diagnosis of CFS, under the consensus agreement and definition established by the CDC in 1994.

Fibromyalgia was defined in 1990 by chronic total body pain — a symptom that a patient will tell you about — plus tenderness, defined as pain that is caused by a doctor when they press on the patient’s skin or muscles. In 2010, these fibromyalgia criteria were changed to total body pain, fatigue, sleep and cognitive problems. This definition of fibromyalgia overlaps with CFS and can lead to confusion about the diagnosis. The consensus panel also removed the requirement to test for tenderness to pressure, making it even harder to differentiate the diagnosis of 1994 CFS criteria from the 2010 fibromyalgia criteria. Newer criteria for CFS include Carruthers Canadian Consensus Criteria that require post-exertional malaise and add symptoms of autonomic intolerance — dizziness and lightheadedness — and flu-like illness, which is the classification system I like best.

In 2015, the Institute of Medicine re-conceptualized CFS as Systemic Exertion Intolerance Disease (SEID) to emphasize that this is a total body and brain disease with disabling fatigue, post-exertional malaise, cognitive and orthostatic problems. Each symptom has to be moderate to severe and present at least 50% of the time. The panel did not include pain because pain did not separate CFS from fibromyalgia, nuances which can make it a challenge to select the best diagnosis for a patient.

The most important point about the fatigue in CFS is that it has been present at least 6 months, is moderate or severe, affects the patient at least 50% of the time, is disabling so that work is reduced, and is not caused by any medical or psychiatric disease. In our study, we used the 1994 criteria with a scoring system that patients and caregivers could fill out to define the basis for CFS, separate it from chronic idiopathic fatigue, and fatigue that may be severe but of shorter duration and perhaps due to an undiagnosed disease.

Q. Is there a blood test or diagnostic assay to determine CFS?

Baraniuk: There is no objective test, blood test, MRI, or other test for CFS.

Q. Is chronic fatigue syndrome called something else in other parts of the world?

Baraniuk: It may be referred to as myalgic encephalomyelitis (ME), Iceland disease, Royal Free Disease, and other names that have been given since the 1950s for various outbreaks.

Q. Is there an association between chronic fatigue syndrome and patients with rheumatologic or autoimmune diseases?

Baraniuk: By definition, if an autoimmune, inflammatory, or other disease is present, then you cannot have CFS. That said, there are research studies to see if autoantibodies and immune cells are not working properly in CFS. In contrast, fibromyalgia, which is marked by pain and tenderness, can be diagnosed with rheumatoid arthritis and other diseases.

Q. Are there challenges involved in treatment?

Baraniuk: Treatment is based on prioritizing symptoms. This includes finding ways to organize life more efficiently through occupational therapy and other life coaching strategies, coping through cognitive behavioral therapy focused on specific issues and separating the fatigue, pain, and other symptoms from the loneliness, disenfranchisement, and loss of value that comes from being ill and disabled.

An empathic physician who is educated about the reality of CFS is one of the most valuable components for a successful strategy. Pain can be treated as in fibromyalgia and other chronic pain conditions. Lower doses of drugs should be used initially. I suspect this is because of central nervous system sensitivities that may be part of the disease, but there is not enough information about this yet. Opiates are not useful and must not be used chronically, as they may make the pain and tenderness worse.

An important finding in our paper was how common orthostatic intolerance symptoms of dizziness and lightheadedness were as causes for going to the ED. A typical ED assessment will find out if heart attack, stroke, infectious gastroenteritis, or other medical causes are present and then many physicians will administer IV fluids. In our research studies, we have given Gatorade, which we sometimes call “vitamin G.” But, perhaps the most important treatment is reassurance from the physician and staff that there is no life-threatening disease, and assurance that the staff have taken the symptoms seriously and do not treat the patient as if “it is all your head” or “just depression.” Giving the patient a copy of the notes and sending them to their personal physician can be helpful.

Q. What are some strategies for properly educating ED physicians and raising awareness of chronic fatigue syndrome?

Baraniuk: The no-ED group shows that many patients have learned from their personal physicians and support groups about the types of acute medical problems that should be treated immediately in the ED. This prevents unnecessary and unsatisfactory visits. This is an area where national organizations and networks of support groups can work to provide guidance.

The ED is not a drop-in doctor’s office. An urgent care center may be a better option if there are medical questions and the personal physician is not available. These medical providers do not have any magic or breakthrough treatments to offer and do not have the time to organize adjunctive therapies. In general, ED physicians may demonstrate a lack of medical knowledge about CFS and a lack of empathy for a patient in distress; they may also believe that the patient is seeking opiates. The International Association for Chronic Fatigue Syndrome/Myalgic Encephalomyelitis has excellent adult and pediatric primers for physicians. – by Rob Volansky