Biosimilars Savings: “...the Substance of Things Hoped For”

In 2006, the European Medicines Agency approved Omnitrope, a biosimilar recombinant human growth hormone, as the first biosimilar. Over the subsequent decade, the EMA has approved additional biosimilars and, as of December 2017, 33 biosimilars were marketed in the European Union to treat a variety of conditions.

Market competition in many European Economic Area countries has resulted in significant price reductions for biosimilars compared to the prices of their reference products. In Norway, where the government purchases hospital-administered medications using a tender process, the winning bid for infliximab in 2014 was 39% lower than that of its reference product, Remicade; in 2015, the winning bid of the biosimilar Remsima (Celltrion) was 69% lower than that of Remicade. Such market competition has resulted in both lower prices and increased sales volume, not only for the biosimilars but also for the other products in the same therapeutic class.

In 2015, the FDA approved Zarxio (figrastim-sndz, Sandoz) as the first biosimilar in the United States. Since then, the FDA has approved eight additional biosimilars, six of which are TNF inhibitors used to treat inflammatory diseases. Of these, only two infliximab biosimilars — Inflectra (infliximab-dyyb, Celltrion/Pfizer) and Renflexis (infliximab-abda, Samsung and Merck) — are commercially available.

One would expect that greater market competition should result in price reductions with direct savings derived from use of a biosimilar instead of its reference product — so, why do market forces not result in significantly lower prices for biosimilars in the U.S.?

In the U.S., pharmacy benefit managers (PBMs) are third-parties that charge a fee to administer prescription drug programs for commercial, government, and self-insured employer plans. These PBMs negotiate rebates and discounts with drug manufacturers, based upon the list price of a drug: the higher the list price, the larger the discount and rebate that can be negotiated. The PBM typically returns some, but not all, of these cost savings to the plan sponsor. Thus, it is to the advantage of a PBM to place higher-priced drugs, for which it has negotiated significant rebates and discounts, on formulary. The balance of the rebate and discount that is not returned to the plan sponsor contributes to the PBM’s profits. Accordingly, a biosimilar with a list price lower than that of its reference product may be less attractive to a PBM.

However, if lower-priced reference products are designated by payors and PBMs as being preferred over their biosimilars, market competition will be stifled. Then, if biosimilar manufacturers cannot gain market share and withdraw from the market, the prices of reference products likely will rise to their former levels or higher. Even if it reduces the profitability of PBMs, the use of biosimilars should be encouraged to preserve a competitive market and sustain the availability of affordable medications for patients.

Disclosure: Kay reports consulting and being an independent contractor for AbbVie, Genentech, Lilly, Pfizer and UCB; being a member on the advisory board or review panel for Alexion; and consulting for Amgen, AstraZeneca, Boehringer Ingelheim, Bristol-Myers Squibb, Epirus Biopharmaceuticals, GlaxoSmithKline, Hospira, Janssen, Merck, Myriad Genetics and Novartis.

The Cost of Biosimilars, Lessons from Hepatitis C, and the Summer of Love

I want to thank Dr. Jonathan Kay for his outstanding editorial explaining the cost/charge structure for biologic drugs in our country, which appears to involve a Byzantine system of agents and middlemen that I think can only be described as ‘bug-nutty.’ Who would design anything this way?

I have only one motivation to use biosimilars: To bring some cost saving to my patients who are struggling every day for approval of their medications or to meet their copays. In the U.S. — if anyone in political leadership is listening — we need to do better.

This brings me to the world of hepatitis C, which I have a foot in by virtue of my infectious disease appointment and work. Let us start by asking: Have you ever wondered why, after 20 years of biologic agents in RA centered on the sequential approval of five TNF inhibitors, none has a clear cost advantage to your patients? Yes, so have I! The same scenario is working itself out in the rapidly advancing field of direct-acting antiviral agents for hepatitis C (HCV) but compressed over just a few years and there is something interesting happening there.

Everyone is aware that the early agents in this remarkable pipeline — able to cure 99% of patients with HCV — were expensive; at nearly $1,000 a pill, this cost makes even rheumatology drugs sound cheap. Remember, however, that HCV patients take these for only a few months rather than for life.

Over a period of just a few years a series of subsequent new agents have entered the marketplace, which Mike S. Saag, MD, medical editor of HCV Next, called “Me too” and “Me three” drugs. These drugs, similar to each new TNF inhibitor we welcomed in rheumatology, represented more variations on theme rather than major advances in the field and had little overall impact on costs within the class. Sound familiar? 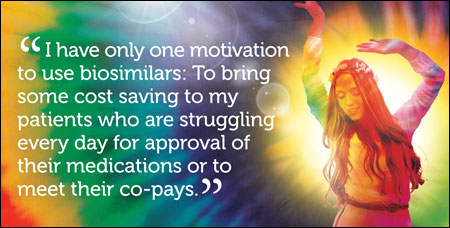 Then something happened. In August 2017, Mavyret (glecaprevir/pibrentasvir, AbbVie) was approved and priced at two-thirds of the initial cost of the original drug in class, Harvoni (sofosbuvir/ledipasvir) by Gilead. I, for one, am both surprised and encouraged that a blockbuster class could usher in a new drug that uses price as a market differentiator. Ironically, this price differential came from the same company that just last month announced a 9.7% increase in the price of Humira, which, according to one drug pricing analyst, could add more than $1 billion to the U.S. health care system’s drug bill this year.

Imagine a world where, in the field of rheumatology, we would witness a major price correction with the approval of each new biologic within the class. Imagine that the originator TNF inhibitors approved nearly 2 decades ago would have their prices tumble as new drugs entered the marketplace. Imagine this happening as each new biosimilar is approved, as well. Well in 1967, the Summer of Love, Eric Burdon sang a song call “Down in Monterey”. Maybe some of you can even remember it; for most of you, I suggest a YouTube interlude. In this iconic song, he describes a world of peace and love and social order that sounds even better today than it did back then. Near the end of the song Burdon pauses and says “I think that maybe I’m dreaming.” Yeah, me too — next patient.