The New Face Of An Old Disease: Gout Gets Respect at ACR 17

It’s the disease of kings, royalty, aldermen and the most common form of inflammatory arthritis with more than 5 million Americans afflicted, but as Rodney Dangerfield used to say: “Can’t I get a little respect here?” This year I declare, among other promulgations, this was the year of gout in San Diego with literally dozens of abstracts.

For so long the field of gout was the domain of a small group of brilliant ‘gout heads’ who waxed poetically regarding arcane biochemical pathways that I could never learn, even in medical school. Now, largely driven by two factors I believe, gout has reached center stage. One significant factor has been the development of a series of newer and more powerful agents designed to lower uric acid, dissolve tophi and treat acute attacks; it is no coincidence that the excitement in the field has paralleled the advance of these agents as we are now forthrightly trying to determine their risk-benefits and cost-benefits as we gain experience with them in the clinic.

A second driver of interest has been the growing appreciation that uric acid is more than casually enmeshed as a biomarker in diverse disorders of aging and inflammation ranging from cardiovascular disease, renal function, metabolic syndrome, OA and even dementia. Long gone are the days when uric acid was expunged from automated chemistries as superfluous and meaningless — boy, wouldn’t we like to have it back now? Perhaps it may have helped negate the epidemic of unrecognized and mismanaged gout in the country today.

In this issue, our panel of experts will explore many of these topics but let me share a few tidbits from ACR that caught my eye. Notably, a series of abstracts discussed the relationship of uric acid to not only inflammatory arthritis, but also a host of disorders including diabetes (Abstract #1118), heart failure (Abstract #119), osteoarthritis (Abstract #2896) and dementia (both for and against; Abstracts #2076 and #2080).

In addition, there were numerous abstracts on treatment including how to improve reduction of uric acid, how to treat acute attacks with a variety of drugs as well as data on the disease and its overall management and prevention. I particularly liked the one (Abstract #166) that showed that rheumatologists are more likely to achieve serum uric acid <6 mg/dL than non-rheumatologists — are you surprised? Lastly, there was a very intriguing study that strikes to the core of this editorial by exploring whether the name ‘gout’ carries a negative stereotype and whether a more refined designation such as uric acid crystal disease may carry more gravitas. Hear, hear to such creative research, a true sign of an energized field.

I want to close by discussing the drug pegloticase which has been, until recently, so poorly misunderstood. Clearly I have never seen a drug have such a dramatic effect on significant tophi, which in my experience prior to pegloticase, virtually never went away with standard urate lowering therapy. Ridding gout patients of significant tophi was akin to watching paint dry in my previous experience. The data on pegloticase clearly demonstrate that even large tophi can be melted away with pegloticase even after a course of 6 to 9 months.

The problem with this drug is a complex story of drug development and regulatory complexities focused on the drugs supposed ‘Achilles heel’, namely its well-known propensity to be immunogenic. Until a couple years ago, the word on the rheumatologic street — and not helped by the package insert — was that it caused anaphylaxis and this has scared many of us from incorporating it into our practices for patients with serious uric acid disease. 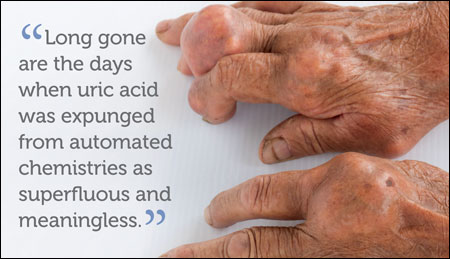 The good news is that over time this issue has been progressively clarified. In a paper we recently published in Arthritis Research and Therapy, we have demonstrated that when used properly — meaning appropriate monitoring of uric acid as a surrogate of immunogenicity — not only was pegloticase well-tolerated and safe but also the previous impression of it as a dangerous drug, compared with other infusibles we use daily, is not really accurate.

Consider the infusions in your own practice: In our study when treatment is optimized the rate of infusion reactions was only in the range of 1 in 200 and none were serious or characterized as what we would describe as anaphylactic. That is comparatively quite remarkable in my experience. At ACR the new TRIPLE study, which seeks an alternative dosing schedule intended to improve effectiveness and decrease toxicity of pegloticase, has thus far showed a low rate of infusion reactions (Abstract #1141).

Finally, in an interesting approach to minimizing infusion reactions by utilizing methylprednisolone rather than hydrocortisone was presented (Abstract #213), which has both benefits and risks, demonstrated effectiveness and may be an option to increase tolerability in vulnerable patients.

Well there you have it: Gout is back, or rather should I say uric acid crystal disease. Share your own gout stories with me.

Disclosure: Calabrese reports serving as an investigator and a consultant to Horizon Pharmaceuticals.