Individuals with alcohol use disorder had a significantly greater risk for suicide, even after accounting for psychiatric comorbidity, according to results of a Swedish population-based cohort study published in American Journal of Psychiatry.

Researchers noted that the time frame shortly after a criminal or medical alcohol use disorder registration is critical for interventions to mitigate alcohol-related suicide.

“This risk persists for years beyond the initial registration for the alcohol problem,” Alexis C. Edwards, PhD, assistant professor in the department of psychiatry at Virginia Commonwealth University, told Healio Psychiatry. “Our analysis indicates that the association between alcohol use disorder and suicide could be due to familial factors that jointly increase risk for both outcomes (ie, genetic liability), and that a causal relationship might also contribute to the association.”

Because alcohol use disorder co-occurs with other psychiatric disorders and risk for suicide is conferred by affective and psychotic disorders, it has proved difficult for researchers to determine the nature of the association between alcohol use disorder and suicide. However, prior studies have shown that both exhibit familial aggregation, partly as a result of genetic mechanisms. 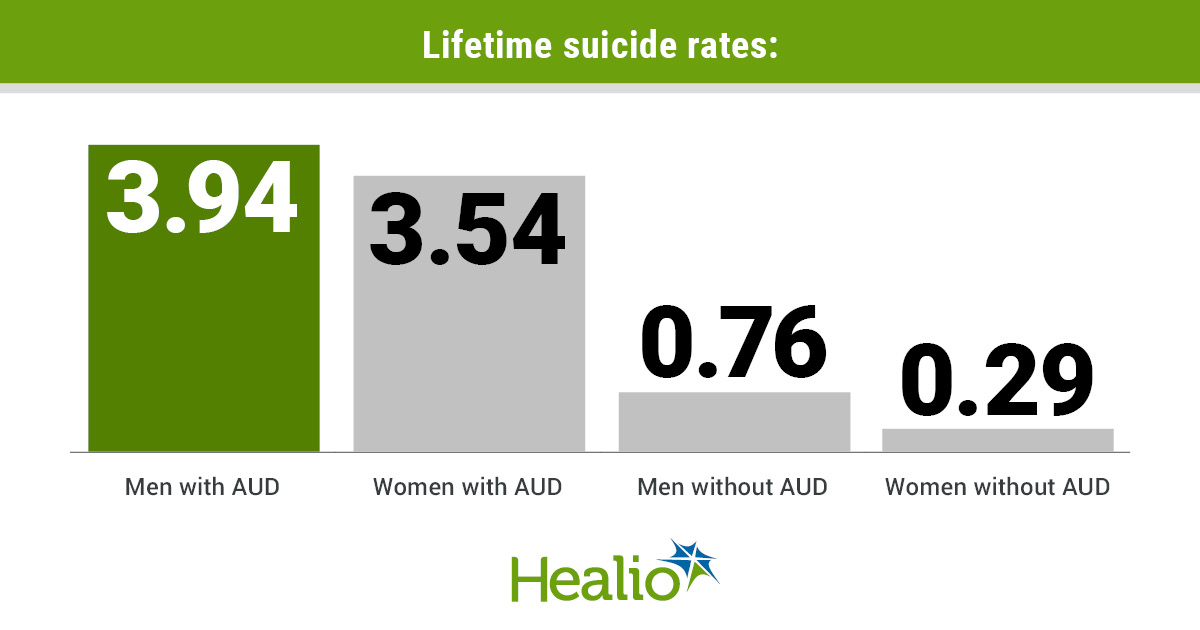 Edwards and colleagues sought to establish the association between alcohol use disorder and risk for suicide, before and after accounting for psychiatric comorbidity. They also assessed the relationship between the observed association and a potentially causal mechanism or familial and genetic environmental confounding factors that increase risk for both.

The researchers analyzed data from longitudinal population-wide Swedish pharmacy, medical and criminal registries to evaluate the risk for death by suicide as a function of alcohol use disorder history. Their analyses had prospective cohort and co-relative designs and included data of more than 2 million Swedes born between 1950 and 1970 who were observed from age 15 years until 2012.

Results showed a lifetime suicide rate during the observation period of 3.94% for men and 3.54% for women with alcohol use disorder. Men and women without this disorder had suicide rates of 0.76% and 0.29%, respectively. Adjusted analyses revealed that alcohol use disorder remained significantly associated with suicide, with hazard ratios across observation periods ranging from 2.44 to 28 among men and from 2.61 to 128 among women. In co-relative analyses, familial confounding accounted for some, but not all, of the observed association. After accounting for a history of other psychiatric diagnoses, the researchers found a substantial and potentially causal relationship remained.

“The most striking aspects of our findings, to me, were that the association was still very strong after accounting for psychiatric comorbidity and that risk persisted for so long, literally for decades,” Edwards told Healio Psychiatry. “I also find it very interesting that two mechanisms are potentially at play — shared risk factors and a causal relationship. Clinicians should be aware that individuals with alcohol problems are at higher risk for and should be screened for suicidal behavior.” – by Joe Gramigna