Recent mass shootings across the United States have prompted policymakers, journalists and the public to often focus the blame on individuals with serious mental illness, disregarding other contributory factors, such as firearm accessibility, according to a viewpoint published in JAMA Psychiatry.

The risk for violent interpersonal behavior is only slightly higher among people with serious mental illness, according to the viewpoint authors Matthew E. Hirschtritt, MD, MPH, and Renee L. Binder, MD, of the department of psychiatry, School of Medicine, University of California, San Francisco.

Prior research estimates that people with mental illness contribute to approximately 4% of criminal violence, according to Hirschtritt and Binder. A 2017 study published in Psychiatric Services demonstrated only 12.4% of adults in state prisons who were charged with violent gun offenses had a history of psychiatric hospitalization, indicating that gun violence cannot be blamed only on mental illness.

Other individual characteristics that contribute to the risk of gun violence include male sex, younger age, a history of prior violent acts or experiencing violence and unlawful use of firearms, gang affiliation, and possession/distribution of narcotics, they wrote. In addition, easy access to firearms in America significantly affects gun violence as well. People with previous psychiatric hospitalization report accessing guns from family, friends and other sources not under federal regulation, according to Hirschtritt and Binder. 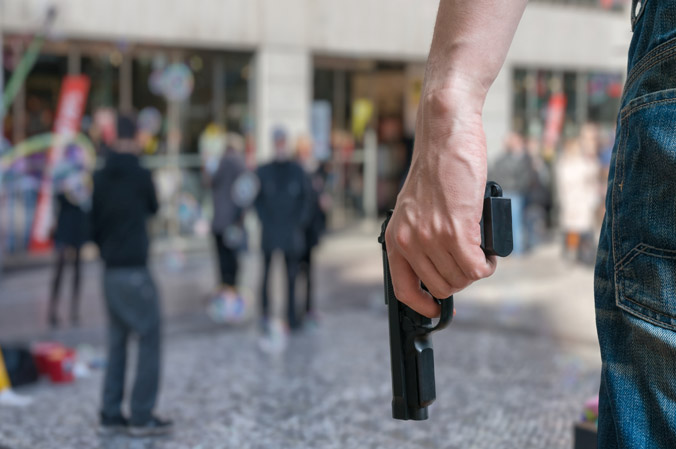 Mass shootings across the U.S. have prompted many to focus the blame on individuals with serious mental illness, disregarding other contributory factors, according to a recent viewpoint.
Source:Shutterstock.com

“We should not stigmatize all people with mental illness, most of whom will never be violent. Instead, we must decrease access to guns by people who pose a danger to themselves or to others, no matter what the cause, eg, domestic disputes, intoxication, being disgruntled and/or threatening,” Binder told Healio Psychiatry. “The use of Gun Violence Restraining Orders is one way of decreasing violence. It allows family members to petition to temporarily remove firearms from an individual during a crisis period.”

To decrease gun violence in the U.S., policy makers should address the association between rates of gun ownership and gun-related violence, as well as provide universal screening protocols for firearm access in clinical settings, according to the authors. Legislation for the restriction of firearms should also include a standardized process that returns gun access rights to people after a high-risk period.

However, we in the mental health community have been saying this for years, and yet these mistaken beliefs persist.

I would add two points to the article: One is that although the above is true, there is a constellation of “red flags” that have been seen in many mass shootings. This constellation is a combination of severe mental illness, including symptoms of delusions and paranoia, along with irritability, anger, substance abuse and access to weapons. That combination is a “red star cluster,” which should be taken seriously.

Another point is that, although we all agree there should be better access to mental health services, that does not mean that potential mass shooters will avail themselves of such services. Nor will they likely admit their murderous plans to a therapist.

For example, after the Fort Hood shooting in 2009, the Army tried to develop a checklist to identify those who might commit similar crimes. However, those who are planning to shoot up an Army base or Afghan village seldom, if ever, reveal those thoughts to a counselor.

This is an excellent article summarizing what is known about the relationship of violence and mental illness. I hope my points add to the conversation.