Acupuncture for PTSD: Getting soldiers through the door

The use of acupuncture is an effective treatment in active-duty service members and can help entice reluctant patients to participate in conventional psychotherapies, according to experts in posttraumatic stress disorder.

“By expanding the repertoire of therapeutic options, the use of complementary and alternative therapies such as acupuncture in the treatment of PTSD provides an element of patient engagement not possible with traditional therapies alone,” Navy Capt. Robert L. Koffman, MD, MPH, department chief for clinical operations at the National Intrepid Center of Excellence in Bethesda, Md., said in an interview.

In a new article published in Psychiatric Annals, titled “Come for the Needles, Stay for the Therapy,” Koffman and colleague Joseph M. Helms, MD, FAAMA, president of the Helms Medical Institute in Berkeley, Calif., discuss their experiences using acupuncture therapy to treat PTSD in battle-worn veterans. The article is part of a series about complementary and alternative medicine in the treatment of the disorder.

According to the authors, evidence-based interventions such as exposure therapy are not always feasible or appropriate given the setting — which often can be on the battlefield — and so physician graduates of a military training program aimed at reducing PTSD in active-duty service members have been using acupuncture to treat symptoms such as anger, anxiety, insomnia, fear, concentration problems and agitation as often as they use the method to relieve musculoskeletal problems.

Acupuncture, a centuries-old method that can deliver physical and psychological relief, has been shown to influence the intracranial structures in the brain that process and interpret stress and psycho-emotional trauma. In their clinical experience, Koffman and Helms have found that placing needles in a pattern of six auricular points around the ear, called the auricular trauma protocol (ATP), has been the most effective method for providing relief and helping patients process their experiences and repair psychological damage. 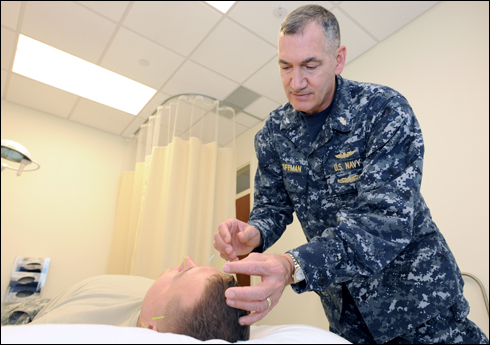 Koffman has performed acupuncture on active-duty service members in a number of battlefield situations, from the Battalion Aid Station to the interior of tactical vehicles to foxholes. In the article, the authors provide a number of cases in which patients had responded positively to the treatment.

In one such case, Koffman attended to a young enlisted man in Afghanistan who presented with symptoms of hyper-arousal and intrusive recollections of traumatic experiences. The patient was reluctant to see Koffman, who had been dubbed by soldiers as “The Wizard” because of the belief that he could make soldiers vanish from the battlefield through a medical evacuation.

According to the authors, it is a priority of the operational psychiatrist to keep a soldier with his unit to avoid making the patient feel shame associated with perceived failure and a sense of abandoning his men and his mission.

The soldier had agreed to acupuncture treatment to help reduce his symptoms and still remain with his unit.

Twenty minutes after receiving the treatment, the young enlisted man experienced “unexpected levels of relaxation” and a reduction in anxiety, according to the authors. The following day the patient reported a “solid sleep” for the first time in months. The patient later returned for another treatment indicated for symptoms of hyper-arousal, anger and avoidance.

As an integrative therapy, acupuncture can be parlayed into more evidence-based psychotherapy, according to Koffman and Helms. After the efficacy of the acupuncture has been demonstrated to the patient and the needles have been removed, the clinician can ask the patient to share any thoughts or feelings associated with the treatment. Depending on the type of acupuncture performed, the patient may experience a flood of imaginal content. If the clinician has developed a trusting relationship with the patient, this may present an opportunity to delve into a meaningful therapeutic discussion, hence the phrase, “Come for the needles, stay for the therapy.”

“Indeed, to assist those suffering from PTSD to more actively and consistently participate in evidence-based treatments, particularly when accompanied by associated symptoms of chronic pain, depression, insomnia, anxiety or substance abuse, I have found acupuncture (among other adjuncts) to not only be useful symptomatically, but by helping to help regulate the autonomic nervous system improve treatment compliance,” Koffman said.

Acupuncture is an ancient practice in the Eastern world, increasingly making headway not only in the West, but now on the battlefield in Afghanistan.

This article, by Navy psychiatrist Capt. Robert Koffman, MD, and medical acupuncturist Joe Helms, MD, describes the current use of acupuncture for PTSD in state-of-the-art therapeutic settings in the United States and on the battlefield.

The use of acupuncture for pain control is common now. "Needling" for PTSD is relatively recent and not yet known or widely accepted in the psychiatric community. The mechanism of action is only partially understood, which is of course true of many psychiatric treatments.

A theme in many of the articles in this series is that service members are reluctant to come for traditional mental health care, but they like the alternative forms of treatment. Once they participate in yoga or acupuncture, they can tolerate more traditional treatment.

"Come for the needles, stay for the therapy."

As has happened historically many times, innovations in military medicine will improve care in the civilian sector.