The United States, the United Kingdom, Chile, Germany and Italy have proposed using “immunity passports” as a potential strategy for easing physical distancing measures, according to a paper published in The Lancet. However, a bioethics expert told Healio Primary Care that there are too many barriers for governments to implement them.

The process that would probably be needed to obtain immunity passports — which are described in the Lancet article as a digital or physical document that certifies a person has been infected with SARS-CoV-2 and is purportedly immune to future occurrence of the disease — is rife with challenges, according to Sharona Hoffman, JD, LLM, SJD, co-director of The Law-Medicine Center at Case Western Reserve University.

“If it is an expensive process to get a passport or it is cumbersome, such as having to take several hours off from work to get tested and complete paperwork in person, not everyone will be able to do so,” she said in an interview. “That can be discriminatory and puts low-income residents at a disadvantage.”

WHO, citing the lack of evidence that patients who have recovered from COVID-19 and have antibodies are protected from a second infection, does not support immunity passports. It said in a scientific brief that immunity passports may provide a sense of false security among recipients, who may then ignore public health measures. 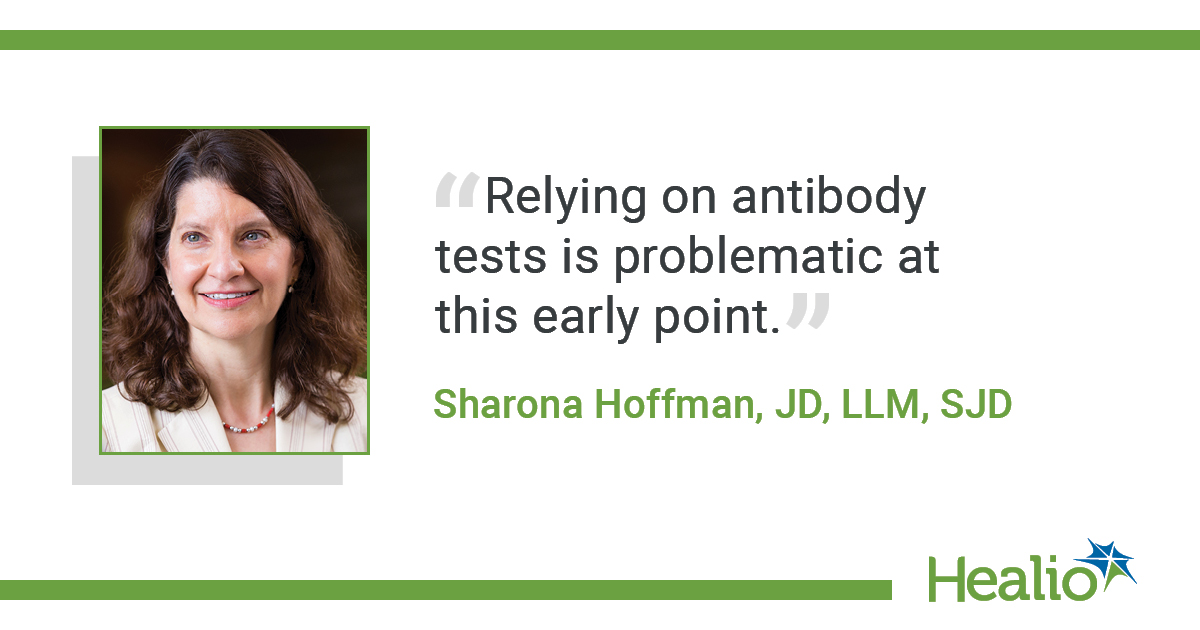 Hoffman, who is also a professor in the department of bioethics at Case Western Reserve University’s School of Medicine, discussed the challenges surrounding immunity passports, the likelihood of them being used and more. – by Janel Miller

Q: What are some of the scientific, practical and equitable challenges that immunity passports pose?

A: There’s a lack of certainty surrounding the antibody tests we have now. There are reports of antibody tests producing false positives and false negatives. We do not know a lot about the virus, what immunity means and how long it lasts. Therefore, it is very hard to justify immunity passports with all of that uncertainty.

Immunity passports might also create perverse incentives for some individuals. For example, an economically disadvantaged person who is desperate for work might deliberately try to become infected to get the passport. There is also the concern that some people would falsify immunity passports, just as other forms of identification are falsified.

Q: What is the likelihood that governments would require immunity passports for exemption from physical distancing?

A: The uncertainty I described makes it not very likely. Relying on antibody tests is problematic at this early point. When we know a lot more about immunity, and if the tests become more reliable, immunity passports may become reality. But it is more likely that we will have to wait until we have a vaccine.

Q: Given this uncertainty, how could governments legally require immunity passports?

A: The government can issue whatever order it wants. We see that all the time. But I think they would get huge pushback and be challenged in court since immunity passports are not supported by evidence, are potentially discriminatory and could create perverse incentives.

Q: What are some more reasonable ways to emerge from the pandemic?

A: When a vaccine becomes widely accessible and not expensive, a vaccine passport is a possibility.

For now, society must be very careful. We must enforce measures such as wearing masks, social distancing, and disallowing events in crowded arenas. When we do open places again, we must proceed with great caution and be ready to reverse some progress, if that becomes necessary.

Q: At what other times in history have immunity passports been used? What have those experiences taught us?

A: There was a yellow fever outbreak in New Orleans from about 1817 to 1905. City residents in that era did try to prove that they had been exposed to yellow fever in order to get jobs.. Those who were immune were called “acclimated.” This occurrence spilled over into the slave market, and those slaves proven to be acclimated sold for 25% to 50% more than those who were not acclimated. People sought exposure and hoped to live through it to be deemed acclimated and have work opportunities. But a lot of them died after being exposed.

I do not know that there are any good lessons to learn from that. Herd immunity is important, but it should not be achieved by exposing everybody. We must be meticulous about putting safeguards put in place until we have a vaccine and it is available to everybody.

WHO.int. “Immunity passports” in the context of COVID-19. https://www.who.int/news-room/commentaries/detail/immunity-passports-in-the-context-of-covid-19. Accessed May 21, 2020.