Disclosures: One author reports receiving personal fees from Abbott Molecular outside of the submitted work. All other authors report no relevant financial disclosures.

Four older adults residing in an independent and assisted living facility in Seattle were exposed to SARS-CoV-2 and became infected with the virus but remained asymptomatic in the preceding 14 days. A facility-wide outbreak was avoided because early surveillance strategies and strict self-isolation measures were implemented shortly after the facility’s first case was identified, researchers wrote in JAMA Internal Medicine.

The findings suggest that screening for symptoms alone after a reported COVID-19 exposure would miss asymptomatic cases among residents and staff of independent and assisted living facilities, according to Alison C. Roxby, MD, MSc, assistant professor in the department of global health at the University of Washington, and colleagues.

“The nonalignment of symptoms and test results signals the need for strategies beyond symptom screening, such as mask-wearing of staff, and facility-based surveillance testing,” they wrote.

Older adults are more likely to develop severe COVID-19 and have a greater risk for mortality compared with younger populations. The pandemic has caused “devastating outbreaks” in independent and assisted living facilities, skilled nursing homes and other senior communities in the United States, according to the researchers. Proper mitigation strategies tailored to these different senior living arrangements remain uncertain, they reported.

The independent and assisted living facility in the report is composed of 83 private apartments. There are multiple hallways and floors, as well as communal dining, library and activity areas.

An investigation was prompted at the facility after two residents with symptoms of COVID-19 were hospitalized, one of whom died 4 days after hospitalization. Upon learning about these cases, staff members quickly enforced strict social distancing measures and enhanced hygiene practices, according to the researchers. They were screened for symptoms and had temperature checks daily. Residents were isolated in their apartments. Most of them (79%) had at least one serious chronic condition, placing them at greater risk for more severe COVID-19 disease. No communal meals or activities were allowed, and outside visitors were prohibited. 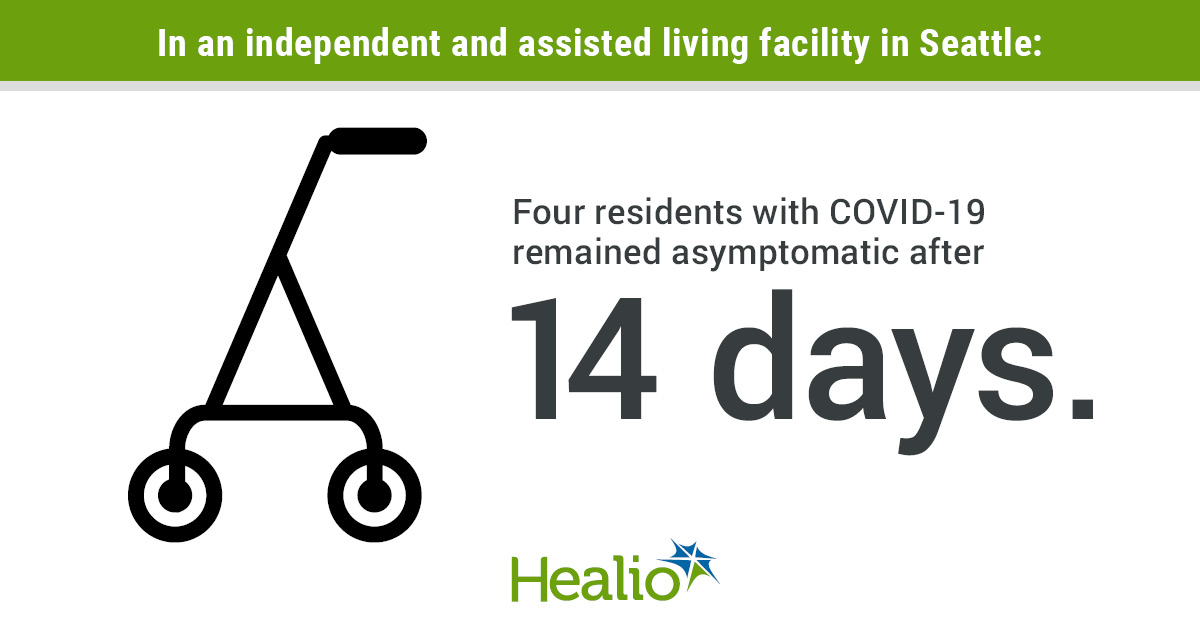 Roxby and colleagues from the University of Washington, the local public health department and the CDC arrived at the facility 5 days after the first patient was hospitalized to investigate the outbreak. They administered questionnaires to residents and staff to determine how many individuals had symptoms of COVID-19, including fever, cough, malaise, diarrhea and sore throat. They also conducted widespread SARS-CoV-2 testing at the time of the survey and 7 days later to confirm whether there were additional infections in the facility.

All 80 residents (77% women; mean age, 86 years) on-site at the facility and 62 staff members, including health aides, environmental service workers, food service workers and administrative staff, were tested for COVID-19. The symptom questionnaires were completed by all the residents and 57 staff members.

Forty-one percent of residents and 28% of staff members reported at least one symptom of COVID-19. During the initial test, three residents — a man in his 70s, a woman in her 90s and another woman in her 80s — from three different floors tested positive for COVID-19. All three of these residents reported feeling well on the day of testing.

During follow-up testing, an additional asymptomatic infection was detected in a woman in her 80s who was negative the week before. She lived on the same floor as the hospitalized residents. All of the cases “continued to exhibit their usual state of health,” the researchers wrote.

SARS-CoV-2 was also detected in two staff members — one food service worker and a health aide — who reported experiencing symptoms, including headache, body aches and cough. One of the two employees had not worked while symptomatic, according to the researchers.

No other cases were detected beyond the 14-day incubation period.

The living arrangements among residents, all of whom had their own apartments, as well as the rapid identification of asymptomatic cases and stringent self-isolation measures likely prevented additional COVID-19 transmission, Roxby and colleagues reported.

“The findings of both asymptomatic and mild SARS-CoV-2 infection in elderly persons, and in staff providing them assistance, underscore the vital importance of current recommendations for continued social distancing, strict staff screening and visitor exclusion per current CDC guidance,” they wrote.

In a related editorial, Grace Jenq, MD, associate clinical professor of geriatric and palliative medicine at the University of Michigan, and colleagues wrote that the findings raise the question of whether universal SARS-CoV-2 screening should be implemented in assisted living facilities after a case is detected.

“It is difficult to determine best practice based on a single center’s experience, in part because the likelihood of identifying asymptomatic or presymptomatic carriers depends on local factors,

such as timing of index case diagnosis, degree of ongoing community transmission, sick leave policies and configuration of living quarters,” they wrote.

Although self-isolation helped prevent an outbreak at the facility, Jenq and colleagues noted that older adults “cannot and should not be isolated from their loved ones indefinitely.”

“As testing becomes more prevalent, accurate and efficient, one might envision a system of point-of-care COVID-19 testing for visitors,” they wrote. “In the end, COVID-19-associated deaths will not just be related to infection but falls, chronic conditions and worsening emotional health.” – by Stephanie Viguers

Disclosures: One author reports receiving personal fees from Abbott Molecular outside of the submitted work. All other authors report no relevant financial disclosures.