By Janel Miller
Perspective from Keith N. Fargo, PhD
Perspective from Sharon A. Brangman, MD
Source/Disclosures
Disclosures: Fink reports that the evidence synthesis on which the biomarker and treatment manuscripts were based was funded by an Agency for Healthcare Research and Quality contract. Please see the reviews for all other authors’ relevant financial disclosures.

A series of review articles found limited or inconsistent data supporting the accuracy of biomarkers and cognitive tests for diagnosing and differentiating Alzheimer’s disease, as well as drug treatments that minimally impacted functional decline.

The authors wrote that diagnosing the different types of dementia can be difficult. 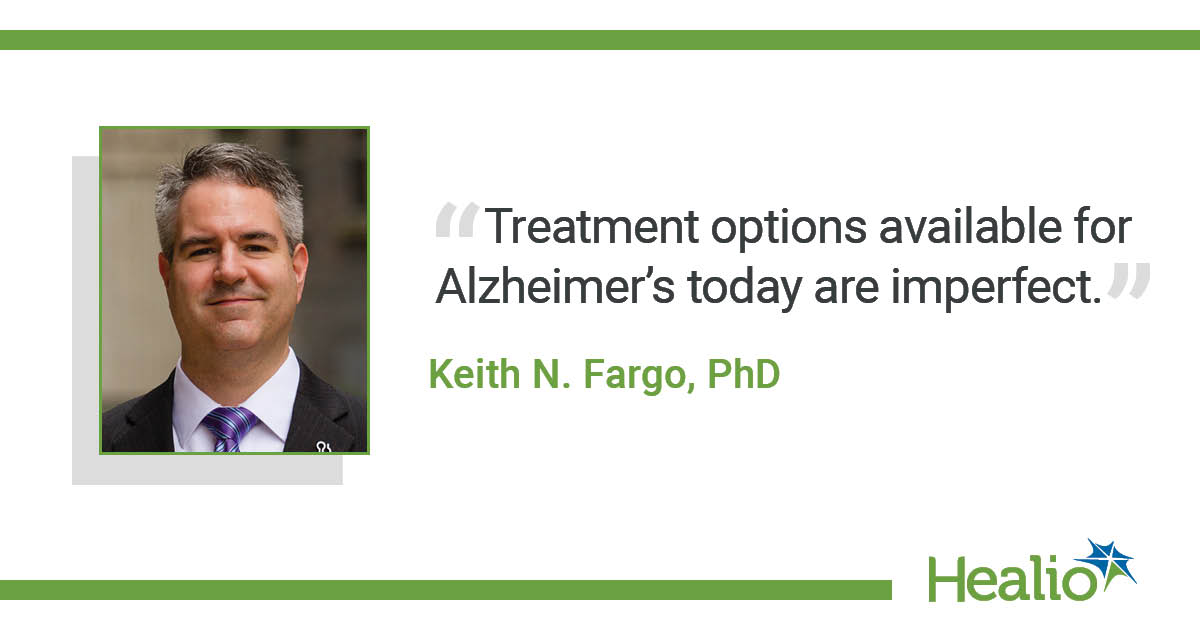 Time and availability prevent many primary care physicians from using neuropsychological tests to diagnose dementia and its different subtypes, the authors wrote. Therefore, they focused on short cognitive tests that could be administered in primary care settings.

The authors wrote that the median sensitivity and median specificity scores of certain tests were all high or near high 0.79 or higher). These tests included the Brief Alzheimer Screen, Mini-Mental State Examination, Montreal Cognitive Assessment, the clock-drawing test, the delayed recall test and language fluency test.

Previous reports indicated that compared with placebo, the magnitude of the effect cholinesterase inhibitors and memantine had on improving cognition and function was limited. To update this evidence base, the authors compared 16 treatments to placebo in their review.

They found that across clinical Alzheimer-type dementia severity, there was an abundance of low-strength evidence to suggest that cholinesterase inhibitors offered only average improvements in cognition at most. The treatments did not increase the likelihood of moderate improvement in global clinical impressions, and adverse events associated with their use led to nonadherence among patients. The impact of prescription drugs on behavioral and psychological symptoms was limited by mostly insufficient data, as was the impact of supplements on all clinical Alzheimer-type dementia outcomes.

“Most drugs had few trials without high risk of bias, especially for supplements, active drug comparisons, behavioral and psychological symptoms and longer trials,” Fink and colleagues wrote. – by Janel Miller

Disclosures: Fink reports that the evidence synthesis on which the biomarker and treatment manuscripts were based was funded by an Agency for Healthcare Research and Quality contract. Please see the reviews for all other authors’ relevant financial disclosures.

These reviews provide an important update on the current state of research in three areas of critical importance to clinicians on the front lines. The findings underscore the fact that advancements across all three areas are needed to help primary care physicians meet the future demands of patients.

Treatment options available for Alzheimer's today are imperfect. The medications that we currently have provide important, but modest, benefits. This makes early and accurate diagnosis even more critical. Enabling early diagnosis will allow optimal use of available treatments while also identifying potential participants in ongoing clinical trials to develop even more effective treatments.

The good news here is that there are tools available now for primary care physicians to use in determining an accurate diagnosis. The Medicare Annual Wellness visit should include an assessment of cognition, and the review article indicates that even brief cognitive assessments provide important information to the physician. However, their relative lack of specificity in distinguishing between clinical stages (unimpaired vs. mild cognitive impairment vs. dementia) highlights the need for a careful workup in making a diagnosis. This should include further cognitive testing if impairment is suspected, along with making referrals for specialist care and/or biomarker testing when appropriate.

These three articles highlight where research on Alzheimer’s disease is right now.

I am concerned that most Alzheimer’s study participants are white adults, when we know that the disease has a huge prevalence in people who are black and brown.

Further, a lot of tests are not easily accessible by all older adults. Take neuropsychological testing, which is time consuming and expensive. There is also variability on how insurance will pay for it, and it is often only available in cities with big academic health centers.

When it comes to screening tools, everybody has their favorite. There may not be enough of a difference to say one is better than the other. The whole process of evaluating people with dementia needs to be reviewed because it is not something you can do in 15 minutes, and most busy primary care practices have about 10 minutes with each patient.

I still hear patients being told, “Everybody has a memory problem at your age, don't worry about it.” Memory loss is not a normal part of aging. There are some normal changes that happen to our memory as we get older but memory loss such as a dementia is not normal.