Higher levels of caffeine intake and plasma urate were associated with a lower risk for developing Parkinson’s disease, according to research published in the Journal of Parkinson’s Disease.

He explained that both caffeine and urate had previously shown protective properties in animal models of Parkinson’s disease.

Bakshi and colleagues conducted a cross-sectional, case-control study of participants in the Harvard Biomarkers Study, a longitudinal study that aims to identify and validate markers of Parkinson’s disease. The researchers assessed participants’ caffeine intake through questionnaires and urate levels through plasma samples that were collected at their first visit after enrollment. 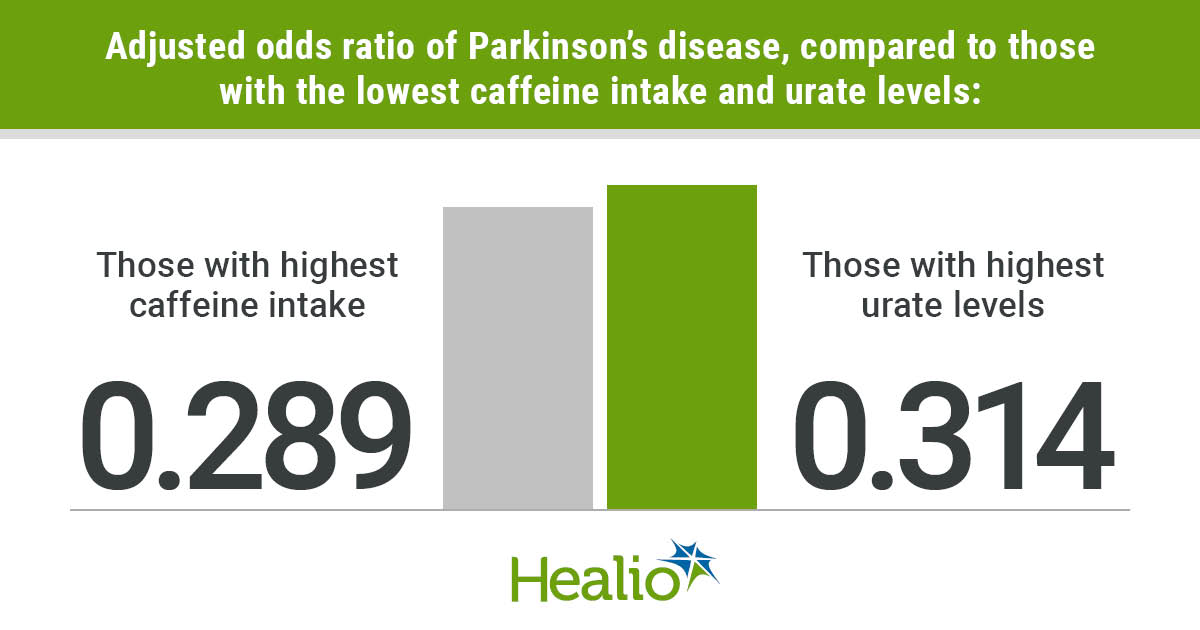 A total of 369 patients with idiopathic Parkinson’s disease and 197 healthy controls were evaluated in the study.

The results were similar in a gender-stratified analysis, according to the researchers.

Bakshi and colleagues noted that the association between urate and Parkinson’s disease risk in women contradict findings from previous studies.

In the press release, the researchers warned that a recent trial failed to demonstrate a benefit of urate-elevating treatment in patients with Parkinson’s disease over the course of months and years. Therefore, they noted that while their study contributes to evidence supporting a link between Parkinson’s disease and lower urate levels, efforts to elevate urate levels are not currently recommended.

Similarly, they noted that more study is needed on the effects of caffeine in a long-term Parkinson’s disease trial before recommending that patients increase their consumption.

However, Bakshi noted in the release that “identifying factors that are linked to lower likelihood of [Parkinson’s disease], such as caffeine consumption, offer a unique opportunity to understand the disease, and if the link were causal, then possibly to slow the disease.” – by Erin Michael

This study provides biomarker support for two potential risk factors for developing Parkinson’s disease: relatively lower caffeine intake and relatively lower serum urate concentration. There are many hypothesized explanations for how and why having lower levels of these two compounds might put people at increased risk for developing Parkinson’s disease. This design of this study doesn’t allow it to answer these more mechanistic questions. There are other limitations of the study as well, including its cross-sectional and single-center approach, the retrospective nature of caffeine intake assessments and the limited amount of clinical information provided about the participants with Parkinson’s disease.

These shortcomings, however, are balanced by strengths of the study design, including its detailed analytic approach. The authors were able to control for a number of potential confounders, including a detailed effort to adjust for caffeine in the urate-specific analysis and urate in the caffeine-specific analysis. They were also able to model a dose-response effect for caffeine after adjusting for confounders in both men and women. Collectively, these findings strengthen the argument that purines, including caffeine and urate, may play a unique causal role in the complicated cascade of factors that contribute to Parkinson’s disease.

This study’s findings won’t change current clinical practice, but they have key implications for the near future. As the authors point out, the SURE-PD3 trial recently demonstrated that urate elevation isn’t yet a proven successful method to alter disease progression in people who already have Parkinson’s disease. For better and for worse, this trial and its predecessors have given us a much more detailed understanding of the safety profile and subgroup efficacy of urate-elevating therapies in older adults. The next generation of Parkinson’s disease trials will try to advance the big-picture goals of the entire field by replicating study design advances from the world of Alzheimer’s disease trials —specifically, the next generation of trials will seek to identify high-risk subjects without manifest Parkinson’s disease for enrollment in Parkinson’s disease prevention trials. Lower caffeine intake and lower serum urate levels may be good ways to identify people for these prevention trials. Alternatively, supplemental caffeine and urate-elevating therapies might be well positioned as possible therapeutic interventions whose safety profiles are well-understood to test in at-risk cohorts.