More than two-thirds of headache medicine clinicians who were surveyed reported altering the standardized protocol for injecting Botox, or onabotulinumtoxinA, for chronic migraine prevention, which raises the question of whether more evidence-based recommendations are needed to help guide treatment decisions, researchers wrote in Headache.

OnabotulinumtoxinA is a striated muscle paralytic agent that has previously shown to significantly reduce headache days compared with placebo 24 weeks and 56 weeks after treatment, according to the researchers. 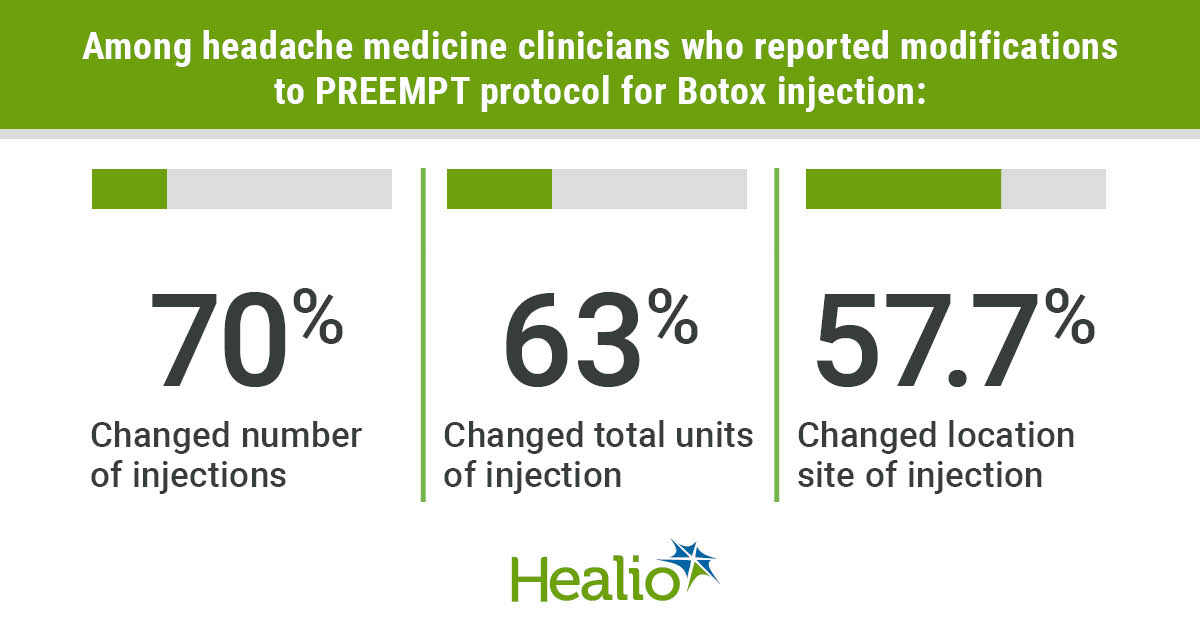 “Its action is not thought to be mediated by muscle paralysis, but instead by decreased sensitization of nerve fibers,” Begasse de Dhaem said.

Nine years ago, the FDA approved the PREEMPT injection protocol for migraine prevention. The protocol calls for 155 units of onabotulinumtoxinA to be superficially injected into 31 locations, with the option to administer an additional 40 injections into the occipitalis, temporalis or trapezius muscle groups, according to the researchers.

Begasse de Dhaem and colleagues emailed an anonymous survey to 878 headache medicine clinicians to investigate potential modifications to the PREEMPT protocol that may have developed in practice over time.

About 20% of participants (n = 182) completed the survey. Most (77.5%) reported that they did not always follow the protocol, with 70% reporting modifications to the number of injections, 63% changing the total units of onabotulinumtoxinA injected and 57.7% changing the location of the injection sites.

The PREEMPT protocol requires physicians to aspirate muscle sites before temporalis injection to ensure no blood return; however, results showed that about half (55.5%) of respondents do not follow this instruction. In addition, 12.1% of participants reported changing the dilution — usually to increase the concentration — and 2.2% reported adding lidocaine to the injections to reduce pain.

The most common reasons for altering doses and injection location sites were to adjust for patients’ pain, anatomy and preferences, according to the researchers. More experienced headache medicine providers were “more likely to deviate from the protocol,” Begasse de Dhaem said.

“Given that this was the FDA-approved protocol for [onabotulinumtoxinA] injections for chronic migraine, these results warrant further investigations of the reasons why the protocol was seldom followed in clinical practice,” the researchers wrote. “Given the lack of published evidence on the reasoning behind the PREEMPT protocol, current guidelines may be perceived as arbitrary, giving providers the freedom to develop deviations.”

They concluded that the wide variations in injection methods “raise concerns about the standardization of the procedure and suggest that an advisory protocol containing more evidence and discussion of the reasoning behind the recommendations might be more helpful than the current prescriptive protocol.” – by Stephanie Viguers