By Erin Michael
Source/Disclosures
Disclosures: Mukamal served as principal investigator for a trial funded by the National Institutes of Health that received partial funding from contributions to the Foundation for the NIH from alcoholic beverage manufacturers.

Alcohol consumption during COVID-19 pandemic: What PCPs need to know

While most people in the United States remain stuck at home during the COVID-19 pandemic, many are increasing their alcohol purchases, and likely their consumption.

Off-premise alcohol sales were up 55% in the third week of March this year compared to last year, according to data reported by Nielsen, an international measurement and data analytics company.

To learn about the effects of increased alcohol consumption on the immune system and other health factors, Healio Primary Care spoke with Majid Afshar, MD, MS, an assistant professor of pulmonary and critical care medicine at the Loyola University Chicago Stritch School of Medicine, and Kenneth J. Mukamal, MD, MPH, associate professor of medicine in the department of medicine at Beth Israel Deaconess Medical Center. 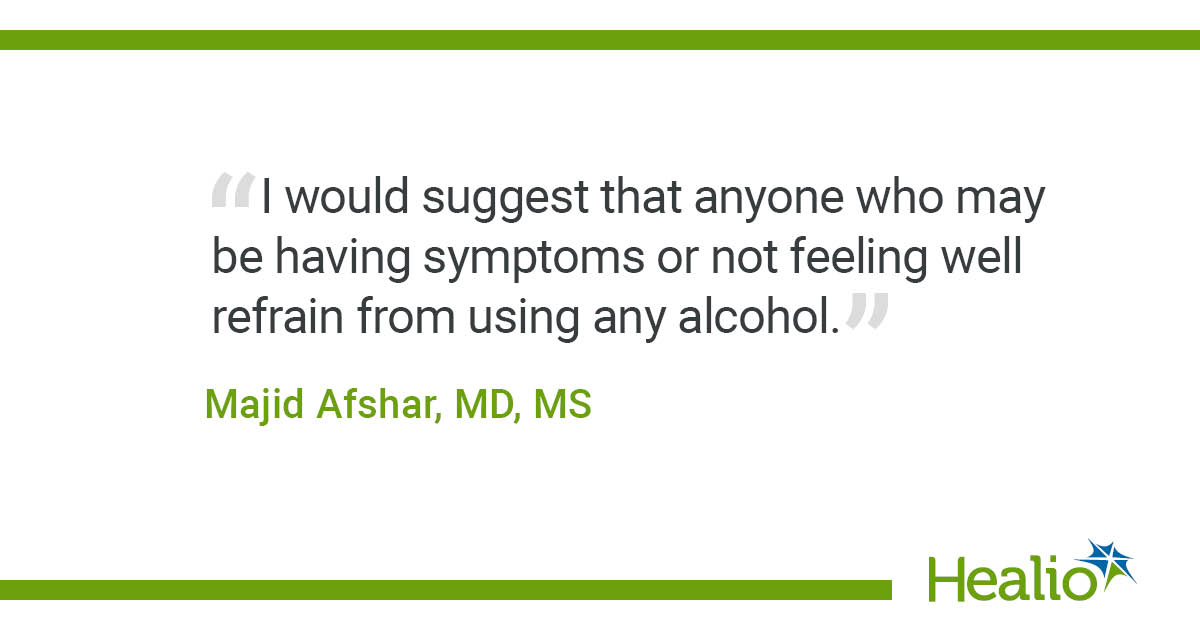 “This suggests that when we need our immune system to function normally and as efficiently as possible, things like unhealthy alcohol use can disrupt that homeostasis,” Afshar said.

Drinking more alcohol than the recommended limit predisposes people to infection in part by depressing the immune system, which “makes it more difficult to fight infections,” Mukamal said.

“However, we do not have direct evidence for whether that applies specifically to SARS-COV-2,” he explained. “Of note, the only infection that has been studied in at least some detail with alcohol is tuberculosis. In a large meta-analysis, alcohol consumption within recommended limits was not significantly associated with TB, but problem drinking clearly was."

Drinking within the limits

While unhealthy drinking likely increases the risk for infection, consumption within the recommended limits — one per day for women, two per day for men — may be fine.

Afshar noted that with moderate drinking, “while we do see some changes that happen in our immune system, they’re transient and they go away rather quickly.”

“I think that while it’s not great, it’s unclear whether that’s going to be harmful to the body for trying to fight infections,” he continued. “I would suggest that anyone who may be having symptoms or not feeling well refrain from using any alcohol.”

Although there is no direct evidence that drinking within the recommended limit increases the risk for infection, Mukamal said that prospective studies have shown that “alcohol consumed within recommended limits — and especially if it excludes even occasional binge drinking — does not seem to clearly increase risk of overall hospitalization.”

This provides some indirect evidence that limited alcohol consumption does not significantly increase the risk for infection, he added.

Making recommendations regarding alcohol consumption during the COVID-19 pandemic can be difficult, as “for most people, alcohol will not have any direct effect on the virus or their risk of infection, and sitting with — for example — a glass of wine in a virtual wine tasting with friends might promote healthy social interaction at a time when that is difficult,” Mukamal said.

Afshar similarly noted that physicians do not necessarily need to recommend that patients stop consuming alcohol, “but I would say to try to minimize it as much as people can.”

While it is unlikely that any single recommendation on alcohol consumption can apply to every patient, Mukamal said “it is especially important at this time not to exceed recommended limits, even once.” – by Erin Michael

Disclosures: Mukamal served as principal investigator for a trial funded by the National Institutes of Health that received partial funding from contributions to the Foundation for the NIH from alcoholic beverage manufacturers.