The Affordable Care Act was signed into law 10 years ago today.

In a recent video released by Protect Our Care, a group that wants to preserve the law, former President Barack Obama credited the ACA with guaranteeing coverage to 135 million Americans with pre-existing medical condtitions, keeping young people covered under their parents’ insurance plans well into their 20s, providing more affordable medications to the elderly and providing free annual exams to women.

Opponents of the law, including President Donald J. Trump, argue that the Affordable Care Act’s name is a misnomer, citing high premiums and deductibles that have left many Americans in or near bankruptcy.

Throughout history, few health-related laws have been a political flashpoint like the ACA, Nicole Huberfeld, JD, professor of health law, ethics and human rights at Boston University School of Public Health and School of Law, told Healio Primary Care. 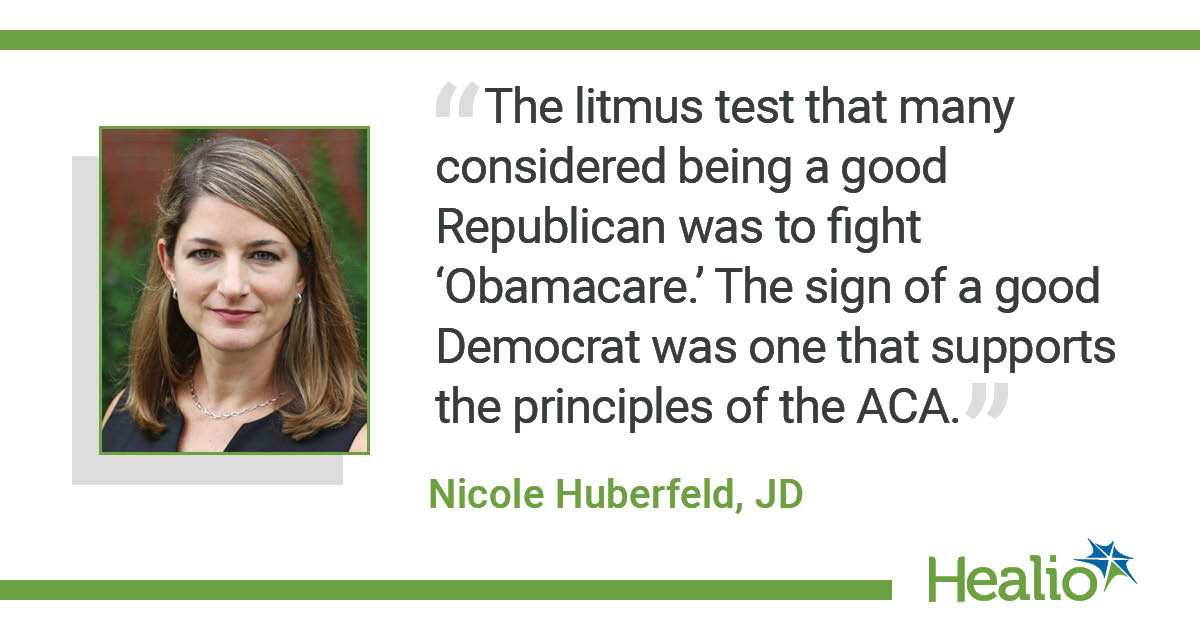 “The [ongoing] debate surrounding ‘Obamacare’ has reflected the polarized political age we're living in,” she said. “Part of it is that Republicans just refused to do anything that Obama wanted to do. The litmus test that many considered being a good Republican was to fight ‘Obamacare.’ The sign of a good Democrat was one that supports the principles of the ACA.”

To further compound the political acrimony surrounding the ACA, results of a recent study in Medical Care may have something to offer politicians on both sides of the aisle to prove their points.

Tummalapalli and Keyhani found that Medicaid expansion was associated with an increase in aspirin use, HIV screening and influenza vaccination. They also credited Medicaid expansion with providing more people with health insurance, having a primary care doctor and going for routine office visits. However, researchers did not find a link between Medicaid expansion and increases in alcohol use screening, cholesterol monitoring, cancer screening or diabetes care.

In recognition of the ACA’s 10th anniversary, Healio Primary Care asked Huberfeld — who was uninvolved in the study — and Tummalapalli to discuss the results and reflect on the law’s first decade. – by Janel Miller

Q: Why was the study conducted?

In recent years, studies have demonstrated positive effects of Medicaid expansion on a variety of other health outcomes. For example, Medicaid expansion has been associated with reduced mortality for patients with kidney disease who initiated dialysis. Individuals with kidney disease residing in states that expanded Medicaid were more likely to be preemptively listed for kidney transplant. Importantly though, we noticed in the literature a potentially more limited effect on preventive health care, such as cancer screening, vaccinations and routine diabetes care. Therefore, we sought to evaluate the effect of Medicaid expansion on these preventive health services.

Huberfeld: This study was meant to measure if people who have Medicaid coverage get the same kind of preventive care as people with private insurance coverage. There are previous studies that indicated it is harder in some places for some Medicaid beneficiaries to get access to specialty care. Therefore, I am not surprised that Tummalapalli and Keyhani found that individuals are not getting preventive care, especially if it is the kind that requires follow up with a specialist like a colonoscopy or a mammogram.

Q: The study findings suggested Medicaid expansion did not improve cancer screening , cholesterol monitoring , diabetes care or alcohol use screening . Why do you think that is?

Tummalapalli: Individuals with expanded Medicaid insurance go to the doctor more and therefore, may be less likely to delay needed health care. Preventive health care, however, is challenging. The health outcomes we evaluated in this study require a proactive approach on the part of the clinician, patient and health system. If there are more acute issues that need to be addressed, medical or otherwise, preventive care may not be the main priority.

In addition, patients face many barriers to obtaining preventive care: navigating a complex medical system, access to specialists and lack of knowledge and resources regarding many medical conditions. Physicians also face barriers in implementing preventive care: lack of time during visits, lack of reimbursement for care coordination, potentially misaligned quality measures and lack of ancillary support.

Huberfeld: The [negative] results of the study reflect low physician payment in Medicaid, which is an ongoing challenge. These low payments have led to fewer providers willing to participate in Medicaid over time, especially in the specialty care space. The current presidential administration has exacerbated this problem by rolling back the federal regulations that were supposed to ensure that the states were paying providers sufficiently and providing equal access to care based on the geographic region in which the patient lives.

Q: Based on the evidence, what are the pros and cons of the ACA?

Tummalapalli: It is clear that the ACA has been a resounding success for improving insurance coverage. Evidence from numerous studies on Medicaid expansion point to positive effects on a variety of health outcomes.

The effect of the ACA on quality and costs of care is more complex. Through the ongoing evaluation of CMS’ Merit-based Incentive Payment System with new MIPS Value Pathways, I believe the quality of care is moving in the right direction, toward a reduced set of valid, more meaningful quality measures. Testing of new models of care through the Center for Medical and Medicaid Innovation — a center that was established by the ACA — has been and will continue to be critical to show how alternative payment models can improve quality of care and reduce costs.

Huberfeld: The ACA has had measurable impacts, including increased health insurance coverage, and people can use it. To those who have asked whether , ‘ is Medicaid better than being uninsured?’ The answer is ‘Of course it is, having insurance is better than not.’ Insurance is a gateway to accessing care in the United States.’

Other studies have shown how the ACA increased access to care, reduced financial fragility, reduced medical debt and even improved, , in some studies, people's ability to maintain stable housing. In states that participate in Medicaid expansion, rural hospitals are significantly less likely to close. Those are just some of the pros of the ACA, and the overall picture is that the ACA is net positive.

But there are still things that need to be done. Care is too expensive. People find our system is too administratively burdensome and confusing. A major drawback to the structure of the ACA is that it built on what came before, which increased complexity. Rather than simplifying health insurance coverage, it added to what exists, and while that approach may have been necessary, given the political calculus at the time, that doesn't mean the insurance landscape isn’t more complicated.

For example, individual insurance and small group insurance markets almost didn't exist before the ACA. And now those markets receive a lot of light and heat because they are key to insurance coverage gains and because those more robust insurance markets have increased complexity, not decreased it.

Q: Which of the law’s components that have been dismantled (or are threatened to be dismantled) would you reinstate and why?

Huberfeld: It would be fairly easy for Congress to reinstate the penalty for failure to carry health insurance and that would end the Texas-driven litigation challenging the constitutionality of the ACA. The significant amount of press on these challenges to the ACA generate have people questioning if the ACA still exists.

I would also want to see the executive branch restore the funding for advertising and navigators to help patients understand the ACA. In states that have no Medicaid expansion and have not implemented their own health insurance exchanges, it is very difficult to understand what health insurance options are available, and this has had an impact on information dissemination.

Disclosures: Huberfeld, Keyhani and Tummalapalli report no conflicts of interest.