People with Parkinson’s disease have a higher prevalence of ophthalmologic symptoms than those without the disease, according to research published in Neurology, the medical journal of the American Academy of Neurology.

“It is especially important for people with Parkinson's to have the best vision possible because it can help compensate for movement problems caused by the disease, and help reduce the risk of falls,” Carlijn D.J.M. Borm, MD, of the Radboud University Medical Centre in Nijmegen, The Netherlands, said in a press release. “Our study found not only that people with Parkinson's disease had eye problems that go beyond the aging process, we also found those problems may interfere with their daily lives.”

Borm and colleagues conducted an observational, cross-sectional study across multiple centers in the Netherlands and Austria as part of a larger study on visual impairments in patients with Parkinson’s disease.

The researchers evaluated the prevalence and clinical effects of ophthalmologic symptoms in adults using participant responses to the Visual Impairment in Parkinson’s Disease Screening Questionnaire. The questionnaire included questions on demographic information and visual hallucinations, and assessed the four domains of ophthalmologic disorders — ocular surface, intraocular, oculomotor and optic nerve. 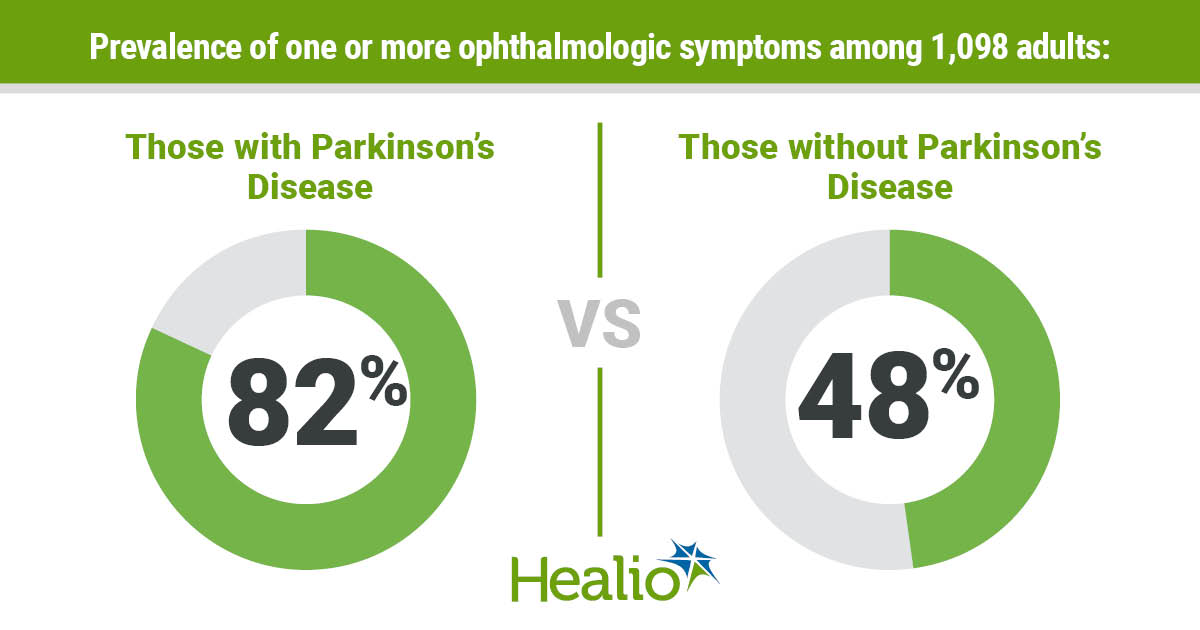 A total of 1,098 participants with a median age of 70 years were evaluated in the study. Of those, 848 participants had Parkinson’s disease and 250 were age-matched controls.

Among participants with Parkinson’s disease, the most common interference in daily activities due to vision problems was reading (52%), followed by driving a car (33%), watching television (28%) and using a computer (28%).

“People with Parkinson's who express that they have eye problems should be referred to a specialist for further evaluation,” Borm said in the press release. “For those who do not express such problems, using a questionnaire to screen for problems that may otherwise be missed might allow for recognition, timely treatment and improving the quality of life.” – by Erin Michael

Overall, Borm’s study is very interesting and impactful. It confirms what many people have suspected for a long time, which is that visual symptoms are common in Parkinson’s disease. Before this study, much of this was either anecdotal experience from patients and providers or based on small studies focusing on individual visual symptoms. This study is noteworthy in the fact that it combines all of those together and asks these questions of a very large number of patients with Parkinson’s disease to capture the scope of these symptoms.

The key points for both patients with Parkinson’s disease and physicians — including neurologists, primary care physicians, ophthalmologists and optometrists — to know are that visual symptoms are common in Parkinson’s disease. Like other non-motor symptoms of Parkinson’s disease, these visual symptoms are often underreported and undertreated, so there may be a potential role for screening for these symptoms using a questionnaire to identify patients who might benefit from referral to an eye doctor. However, it is not yet clear which of these symptoms is most important for patients and how targeted treatment would affect overall quality of life, which will require further investigation.