Hispanic and black adults aged younger than 50 years were less likely to have poor outcomes 3 months after a hemorrhagic stroke compared with white adults, according to a study published in Neurology, the medical journal of the American Academy of Neurology.

“There has been considerable research on stroke in older people, but there is still much to be learned about stroke in younger people and how it affects people of different races and ethnicities,” Daniel Woo, MD, MSc, vice chair of clinical research and professor of neurology at the University of Cincinnati, said in a press release. “Our study found that even when you account for factors that affect outcomes, such as how big the stroke is, race and ethnicity were still independent predictors of how well people would recover.”

Researchers collected data from adults aged younger than 50 years who participated in the Ethnic/Racial Variations in Intracerebral Hemorrhage study, a prospective multicenter study of intracerebral hemorrhage (ICH) in adults. Hispanic, black and white patients with ICH were enrolled at 42 sites in the United States between 2011 and 2015.

Functional outcomes 3 months after ICH were determined using a modified Rankin Scale (mRS), with scores of 4 to 6 indicating poor outcomes. 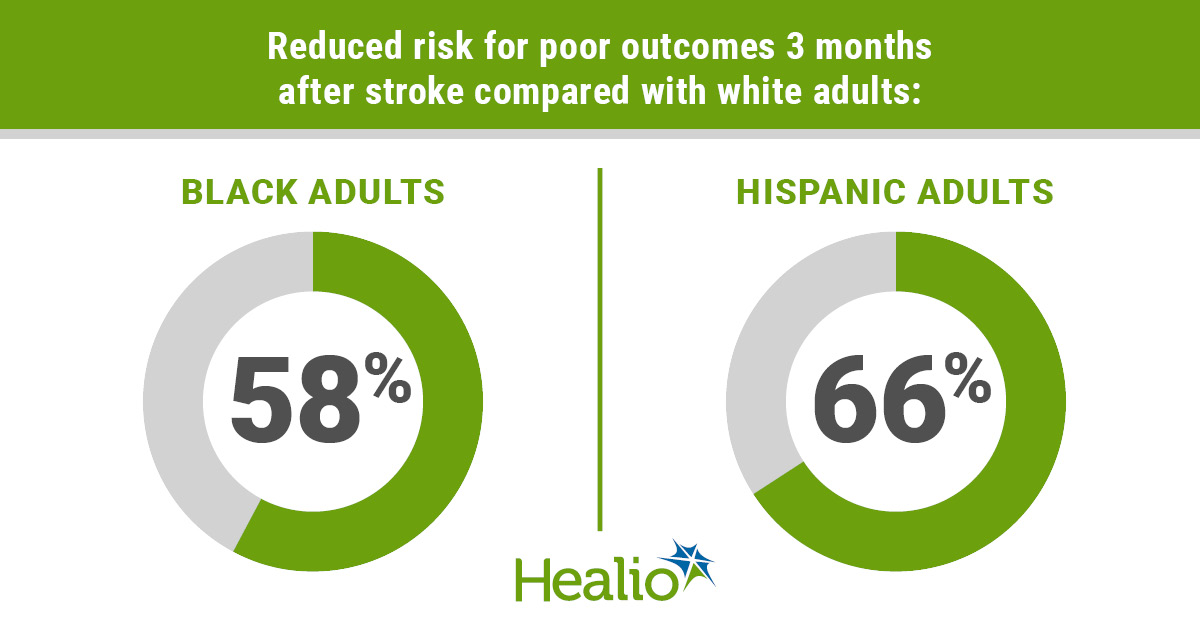 The proportion of those with an mRS score ranging from 4 to 6 was 52% among white patients, 35% among black patients and 31% among Hispanic patients.

Researchers found that white patients had larger hematoma volumes upon admission than black and Hispanic patients. An analysis showed there was not a statistically significant interaction between black patients and ICH volume, suggesting that their lower volume was not a contributing factor to their better 3-month functional outcomes. The proportion of hematoma expansion was similar across all groups.

“Therefore, these findings may indicate that the differences in outcome between black people, Latino people and white people may be driven more by biological, social and treatment factors related to the risk of bleeding stroke, rather than by differences in early management after admission to the hospital,” Woo explained in the press release. – by Erin Michael