Five ways to maximize EHR use

Electronic health records promised to save time but instead, findings show that primary care physicians spend almost 6 hours a day on them.

“EHRs are zapping into our soul, zapping into our personal time with family,” Richard M. Wardrop III, MD, PhD, professor and vice chair of education and faculty development at the University of Mississippi Medical Center, said during a presentation at the 2019 ACP Internal Medicine Meeting.

In a recent poll, 870 physicians were asked to give EHRs a score from 0 to 100 based on usability. The mean score was 45.9, giving EHRs an F grade, or “not acceptable.” A 2019 JAMA Network Open study found that about 13% of clinicians’ self-reported stress and burnout stems their use. Moreover, a chaotic work atmosphere and workload control — both of which are affected by EHR use — account for 40% of physician stress and burnout.

A recent Annals of Internal Medicine article concluded that physicians spend an average of 16 minutes and 14 seconds per patient on EHRs — a statistic that Elmer V. Bernstam, MD, who has addressed EHR reform at a previous ACP Internal Medicine Meeting, called “particularly worrisome.” 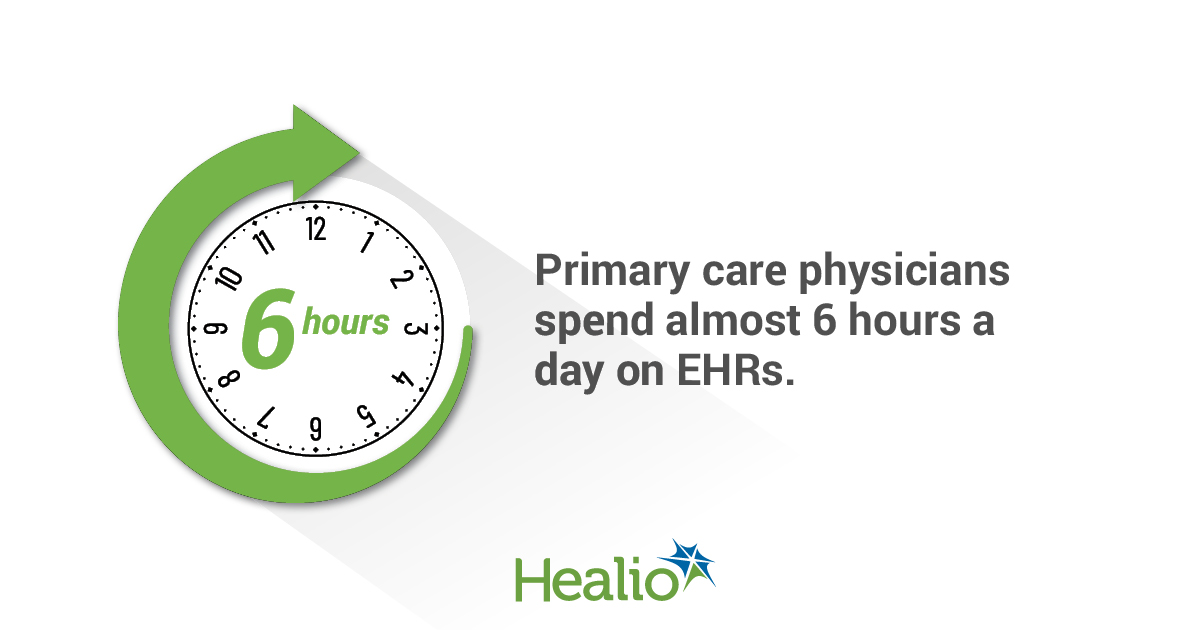 Edward Volpinesta, MD, a doctor in Connecticut, said “EHRs were supposed to help doctors streamline their diagnoses and treatments, but they have become so complicated and distracting and time-consuming that they have depersonalized health care.”

With EHRs increasingly being cited as one of the leading causes of physician burnout, Healio Primary Care explored five ways that physicians can maximize EHR use.

Bernstam, the associate dean for research at the University of Texas Health Science Center at Houston, said the most user-friendly EHR designs follow the aviation industry’s lead.

“The cockpit’s sole purpose is to ensure the pilot flies the plane efficiently and safely,” he said. “He or she does not have to worry about scheduling the gate that the plane is supposes to arrive at, ensuring the airport has enough fuel, or making sure there are enough on-board refreshments.”

Bernstam said an important goal of EHRs is to support billing and perform other administrative tasks. “In many instances, EHRs are not optimized to for taking care of patients,” he added.

The authors of the 2019 JAMA report expanded on the aviation analogy, noting that “the aviation industry has a user interface design philosophy called ‘quiet dark,’ where the default state of all indicator lights is off during normal conditions,” Philip J. Kroth, MD, MS, of the University of New Mexico, and colleagues wrote. “Applying this philosophy to EHR design could potentially reduce the amount of unnecessary data displayed based on particular users’ need and context, reducing the information overload problem.”

“Even with the fewer airport walkup counters, practically no one needs training on how to check-in or check their bags.” said Rogers, who has also given a lecture at the ACP Internal Medicine Meeting on this topic. “Those who do need training only have to be trained once. And they remember it, because the automated kiosks and online interfaces are intuitive and usable,” he told Healio Primary Care. Rogers added that EHR clinical support design would ideally be “invisible” yet “integrated within the physician’s workflow. When accomplished, the EHR enhances the care that the provider is delivering without any effort on their part.

The 2019 JAMA report also showed that 47.5% of surveyed physicians had minimal coverage for their EHR inboxes when needed.

According to Christine A. Sinsky, MD, AMA’s vice president of professional satisfaction, doctors should delegate inbox management to other staff members so these team members so can devote more time to researching and responding to the messages.

“Have a nurse or a medical assistant manage the majority of the inbox messages, rather than a PCP being the first responder to every message,” she said. “This staff member then passes on only the minority of messages that require the physician’s attention. These messages should be researched and prepped before being sent to the physician.”

There are numerous types of EHR alerts, and Bernstam encouraged physicians to periodically review them and remove the ones they no longer need.

“Maybe at one time it was well-used or well-intentioned,” Bernstam said. “But maybe it’s not firing for the right patients or at the right time.” He added that in most instances, IT departments can fix the alert so it functions better.

The AMA’s website recommends having test results sent only to the ordering physician to cut down on confusion and inbox clutter and programming the EHR to turn on or off notification of tests other physicians have ordered on a mutual patient.

Wardrop told Healio Primary Care that “some parts of EHRs are not evil.” For example, it can be useful to leverage data such as how many clicks and keystrokes a physician makes. Then, the EHR dashboard or a vendor representative develops tools that utilize those data to improve workflow and create shortcuts.

“This is a classic example of the more you put into something, the more you will get out of it,” he explained.

Wardrop said that at his former employer, clinicians often review their colleagues’ data to identify areas where EHRs can be improved, which they discuss during a meeting held every 3 weeks.

“These meetings have kept employees’ morale up and alleviated the EHR burden,” he said.

Rogers argued that a big reason why EHRs have not been as useful as they could be is because doctors have been largely absent in their development.

“EHR technology has not met the promise of increased efficiency at higher quality that we believe it has in medicine,” he said. “That’s partly because physicians have not been vocal enough” about the flaws in EHR design and are behind on standardizing their practices to facilitate integration into EHR.

Rogers recommended that physicians work with medical societies to make meaningful changes to EHR systems. He added that if a vendor says "no" to an EHR change, physicians should offer solutions and work with their vendor to address these design issues.

Wardrop agreed that physicians should be part of the process.

“Vendors need to hear from us on what works and what doesn’t,” he said. – by Janel Miller

Disclosures: Bernstam. Sinisky and Wardrop report no relevant financial disclosures. Rogers reports serving on an advisory board for Glytec.