Although the link between climate change and health is “becoming increasingly clear,” the medical community is generally unaware of how much climate change is impacting patients today, experts told Healio Primary Care.

“If you are not taught about the correlations of climate change and health ... then you are less likely to talk to your patients about it and to try to raise awareness on it,” she continued. 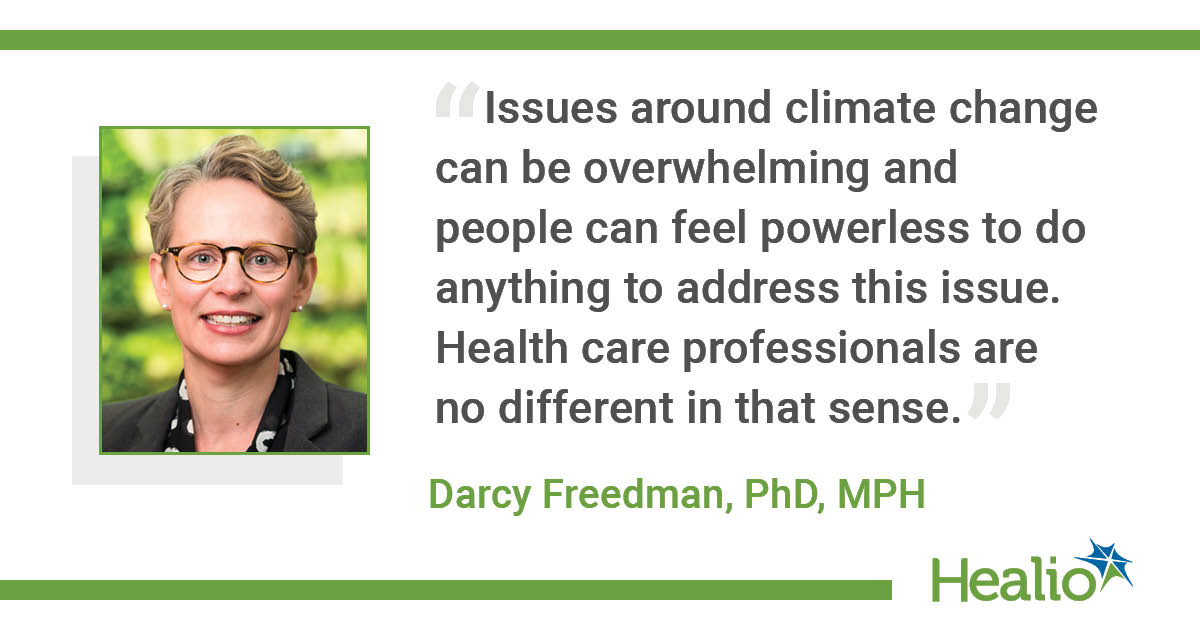 “Issues around climate change can be overwhelming and people can feel powerless to do anything to address this issue. Health care professionals are no different in that sense,” she said.

Healio Primary Care asked physicians and researchers in what ways climate change is having an immediate impact on health. The experts also shared tips on how physicians can address the consequences of climate change.

In many parts of the Northern United States, climate change has resulted in allergy seasons that begin a month earlier than in past generations, Jeremy Hess, MD, MPH, director of the Center for Health and the Global Environment at the University of Washington, told Healio Primary Care.

“Upper respiratory infection and pollen allergy often look similar,” he said, adding that physicians must be able to recognize subtle differences between the two conditions. If the patient is experiencing discomfort in their eyes for a few weeks, it is usually due to an allergy. If the discomfort is elsewhere in the body and only lasts a few days, then it is most likely an upper respiratory infection.

“Physicians who fail to recognize that seasonal allergies are starting earlier may make a misdiagnosis or prescribe the wrong treatment,” Hess added.

Another condition that climate change is impacting is lung disease, according to Stewart L. Decker, MD, a primary care doctor in Klamath Falls, Oregon. He told Healio Primary Care that pollution and smog are increasing rates of asthma attacks and COPD, even in patients without individualized risk factors for lung disease.

“Being outside in some populous urban cities is akin to smoking a pack a day, meaning we will see more and more lung disease even in those who never smoked,” Decker explained.

Research has uncovered concerning trends in CVD that appear to be related to climate change, according to Tummala. “There have been links found between increased risk of cardiovascular complications, such as heart attacks, with extreme temperatures,” she said.

Other studies have concluded that just a few weeks of air pollution exposure can impact the circadian rhythm and thus increase the likelihood of individuals being diagnosed with heart failure, arrythmias, strokes, hypertension and diabetes.

“Increased long term exposure to fine particulate air pollution may further increase the risk for CVD-related diseases in certain vulnerable populations, such as older individuals and those with chronic medical conditions,” Tummala added.

Climate change may compound the risk for CVD-related diseases in women and patients with obesity — two populations that are already susceptible to these conditions, Tummala said.

“People who work outdoors in extreme heat can have their cognition and coordination impacted to the point where they move more slowly,” even in dangerous conditions, he explained.

“Climate change increases the risk of exacerbation of some mental health illnesses,” she said. “The impact of extreme heat is associated with an increase in aggressive behavior and suicide rates, as well as an increase in emergency room admissions for those with mental health conditions.”

The number of people diagnosed with infectious diseases has also risen during the past few years as a result of climate change, Hess said.

“We are seeing a longer, larger breeding season for some mosquitoes,” he explained. In particular, the mosquitoes that transmit dengue have become “more active, more reproductive and thus, more individuals are likely to be exposed to this threat.” 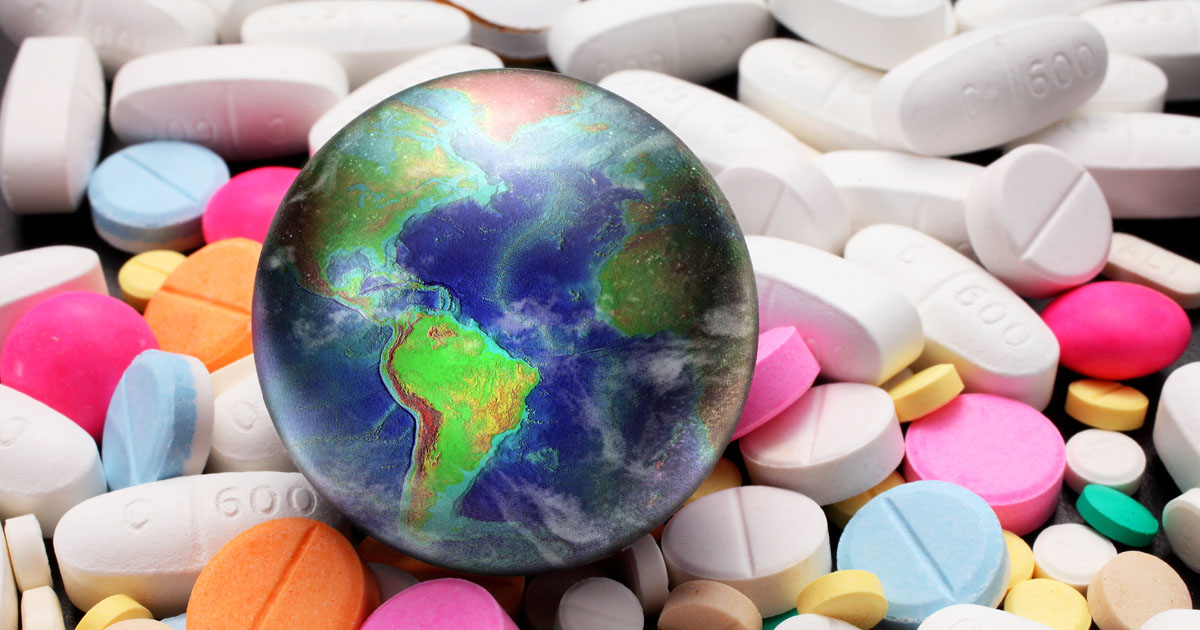 Although the link between climate change and health is “becoming increasingly clear,” the medical community is generally unaware of how much climate change is impacting patients today, experts told Healio Primary Care.

“Physicians need to have higher indexes of suspicion for infectious diseases like dengue,” Hess continued. “They also need to appreciate the changes in seasonality when diseases present to them [and] prescribe therapies earlier.”

Tummala added that Lyme disease is starting to appear outside of original hotspots such as the Northeast United States. Decker agreed that other infectious diseases such as malaria are appearing in parts of the country where they were once never thought possible, creating a critical learning curve for some physicians.

“A great long-term, small-scale example of a climate change adaptation strategy to is to make sure you remember how to diagnose malaria, even if you are living in North Dakota,” he said. “You might be seeing it more in a few years.”

Vulnerable populations such as young children, older adults and socioeconomically disadvantaged individuals who are at a higher risk for poor health outcomes will be most susceptible to the consequences of climate change, according to Tummala. Managing and treating diseases in general will likely become more challenging in the near future, she said.

“Management of diseases will become more challenging as people suffer from worsening exacerbations and secondary complications of their chronic/pre-existing conditions. Decreased access to health care and delay in care, which raises the risk of complications, can be compromised, as seen during extreme weather events,” she said. 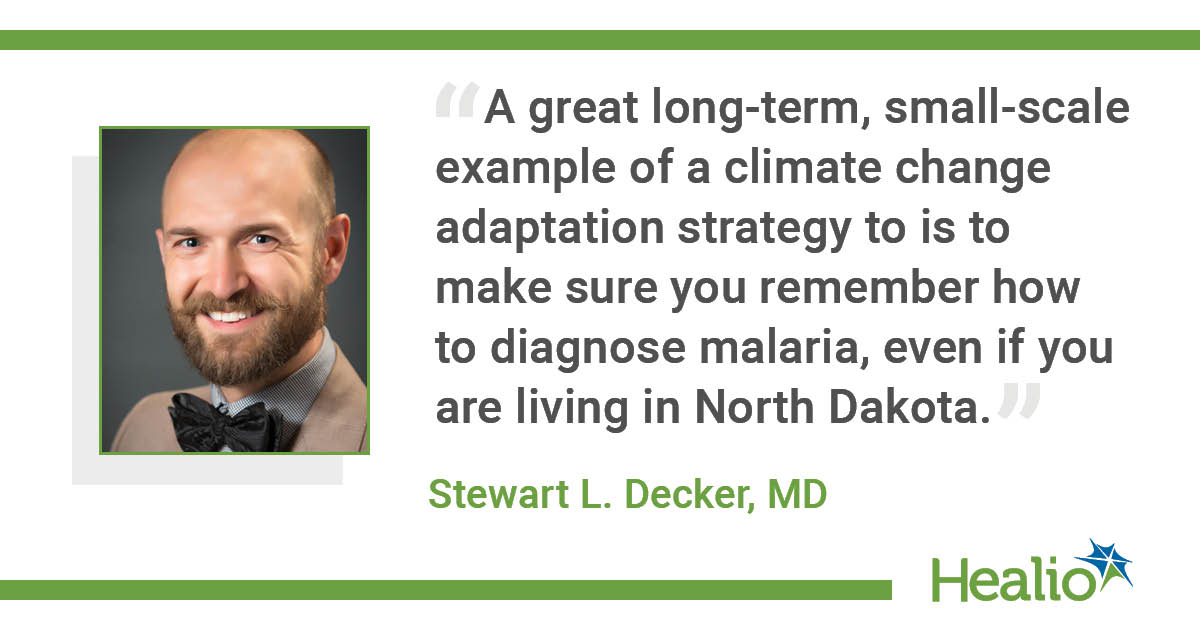 WHO recently reported that only about half of countries have a national health and climate change strategy, which the organization said is “a key tool in promoting leadership and guiding countries toward a climate-resilient health system.”

Freedman stressed that such relationships will be critical moving forward.

“We are not going to solve all our problems at once, but we do need to realize that we need to start working collaboratively,” she said. “Be willing to take risks and try something different. You can change the fleet that mows your lawn. You can encourage and provide incentives for carpooling. That can make clinicians feel more in control.”

According to Decker, physicians can also mitigate climate change’s negative consequences through advocacy.

“Ask local organizations like your state’s Academy of Family Physicians to advocate for climate change legislation. Or bigger still, utilize your voice in national organizations like Doctors for America, the AAFP or AMA,” he said. “If all the above seems too much, the very easiest thing to do is find the director of the public health department or leader of a respected organization and ask them to tag you in when they need a letter written, an op-ed drafted, or testimony delivered that addresses climate change.”

“We have a major role as advocates here,” she said. “We must not underestimate the power of an idea to change behavior, change biology, of individuals, of communities, of societies. If we are to undo life as we know on our planet today, then no idea is too big, and no conversation should be beyond us.”

Hess added that “it is also important for the medical care community to realize that we are part of the problem.” Like Freedman, he also suggested carpooling, as well as eating lower on the food chain.

“When you do, you are practicing green health,” he said. – by Janel Miller

Healthline. Is it allergies or a cold? https://www.healthline.com/health/allergies/allergies-or-cold. Accessed Dec. 31, 2019.