Nearly half of all US adults will have obesity by 2030

By 2030, 48.9% of adults in the United States will have obesity, according to a study published in The New England Journal of Medicine.

Zachary J. Ward, MPH, study author and programmer/analyst for the Center for Health Decision Science at the Harvard T.H. Chan School of Public Health, said the findings indicate that interventions both inside and outside the doctor’s office are needed to help lower the rate of obesity.

“Clinicians have an important role to play in identifying patients most at risk and helping prevent further weight gain and addressing upstream social and cultural determinants of obesity,” he told Healio Primary Care. 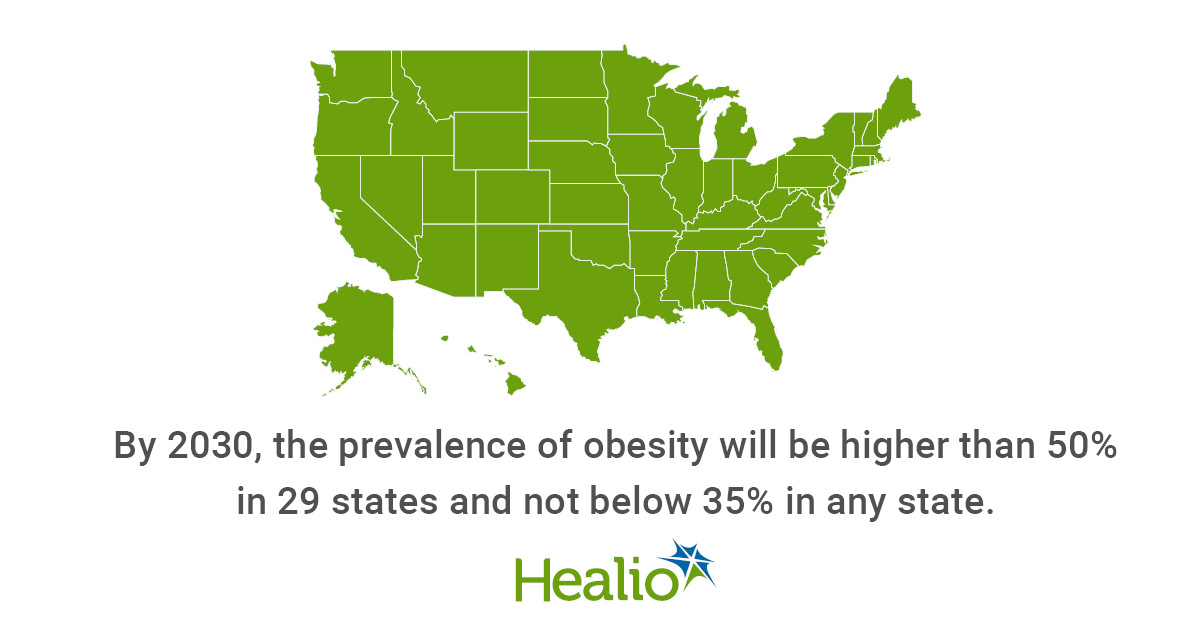 For the study, researchers used state and sub-group data from more than 6.3 million adults over a span of more than 20 years to calculate the following new findings for 2030:

The findings were part of a larger research project called CHOICES (Childhood Obesity Intervention Cost-Effectiveness Study), a program that helps state and city decision-makers identify obesity prevention strategies “that offer the best value for money in their local context,” according to Ward.

Below, Healio Primary Care provides some of its previous coverage on obesity prevention efforts.  - by Janel Miller

A diet low in animal-based foods and high in plant-based foods, without strict adherence to a vegetarian or vegan diet, can potentially prevent overweight and obesity in middle-aged and older populations, according to findings presented at the European Congress on Obesity. Read more.

A reduction in free sugars added to sugar-sweetened beverages by 40% over 5 years, without the use of artificial sweeteners, could prevent 1.5 million cases of overweight and obesity and 300,000 cases of type 2 diabetes over 20 years, according modeling study data published in The Lancet Diabetes & Endocrinology. Read more.

In this video from a National Lipid Association meeting, the association's president provided insight on how patients can change their behavior to prevent obesity. Watch video.

An intensive behavioral intervention for children with overweight and their parents that included skills-building sessions and phone calls did not lead to changes in BMI trajectory after 3 years, whereas a smaller parenting education intervention for parents of young infants was associated with a modest reduction in BMI z score during the same period, according to findings from two studies published in JAMA. Read more.

Modifying individual early risk factors before and soon after birth can help reduce a child’s risk for obesity later in life, according to recent study findings published in The American Journal of Clinical Nutrition. Read more.

Disclosure: Healio Primary Care could not confirm relevant disclosures at the time of publication.

I am not surprised in the least by these findings. There are two overarching points we can take from this study.

One, despite efforts from multiple entities (government, health care systems, not-for-profits and even industry), we have not succeeded in even controlling this epidemic, let alone improving it.  Bottom line — what we are doing is not working. One of the key areas that need improvement is our national dietary guidelines. A recent report from the Academy of Sciences found that the guidelines are not using rigorous scientific methods to develop recommendations. Additionally, it was found that the 2015 guideline committee intentionally buried a large body of scientific literature on low carbohydrate diets.

Two, it is critical that interventions be aimed at everyone with special attention to higher risk groups. Consideration of financial access and cultural traditions is paramount. Clinicians need more exposure and education about disease reversal. The historically prevailing idea that “diets don’t work” and “patients won’t change” has been debunked in recent years with the publication of 2-year results from two large nutrition interventions.

Clinicians need to appreciate the importance of nutrition in every patient interaction. Obesity is a critical issue, but along with obesity comes many other chronic health conditions. These are impacting the quality of life and financial situations of most Americans. A new study based on National Health and Nutrition Examination Study data found that only 12% of adult Americans are in optimal metabolic health. This means that 90% of us are already in trouble or headed there as far as our health is concerned. We must switch our mindset as a medical community from Band-aiding the acute problem to prevention.

The National Academies of Sciences, Engineering, and Medicine. Redesigning the Process for Establishing the Dietary Guidelines for Americans. https://www.nap.edu/catalog/24883/redesigning-the-process-for-establishing-the-dietary-guidelines-for-americans. Accessed December 18, 2019.