Several bills have been introduced recently to reduce the high cost of prescription drugs.

“Despite partisan gridlock in Washington, both parties know that health care — particularly drug prices — are a huge concern for voters,” Jon Bigelow, executive director of the Coalition for Healthcare Communication, told Healio Primary Care. “Both parties want to be able to say they’ve taken action before the 2020 vote,” he said.

Sens. Chuck Grassley, R-Iowa, and Ron Wyden, D-Ore., have introduced legislation, and so has House Speaker Nancy Pelosi, D-Calif. Here’s what clinicians need to know about the plans.

According to a press release, some of Grassley and Wyden’s plan — known as the Prescription Drug Pricing Reduction Act of 2019 — aims to reduce the complexity of Medicare Part D; provide better incentives to increase negotiation between prescription drug plans and manufacturers; make pharmacy benefit manager practices and manufacturer drug pricing decisions more transparent; and allow Medicaid to pay for gene therapies for rare diseases through new risk-sharing value-based agreements.

A report in The Lancet pointed out that the Grassley-Wyman bill would also allow private companies to continue to negotiate drug prices with drug companies. If the prices increase greater than the rate of inflation, the drug companies would pay the difference in the form of rebates to the U.S. Department of the Treasury. 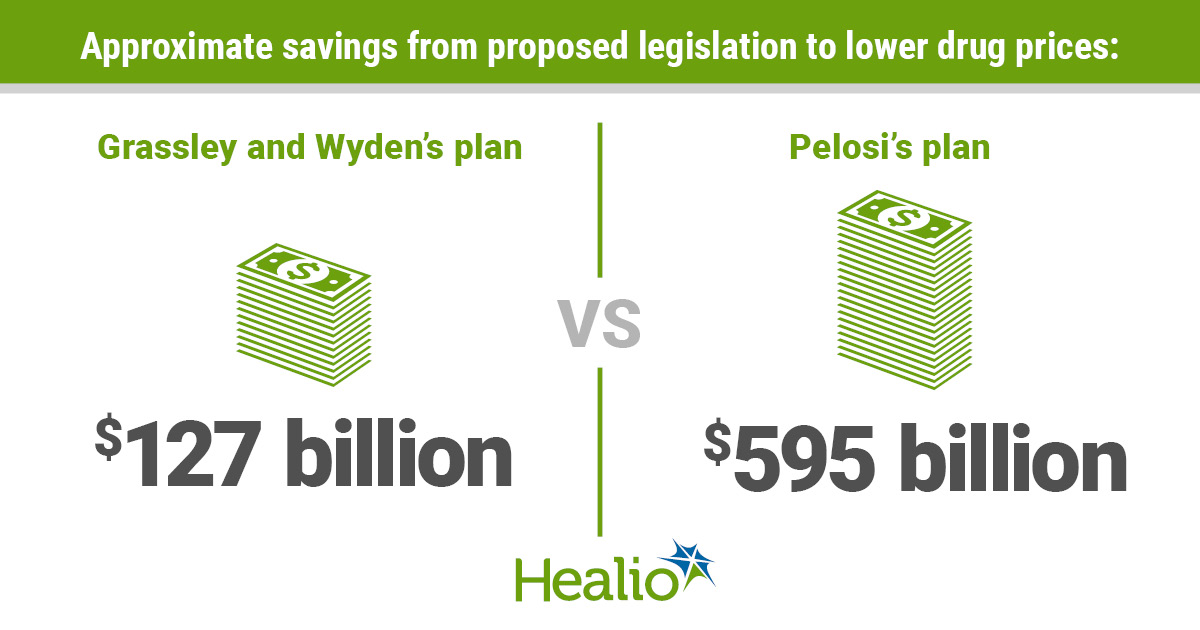 Politico recently reported that although Trump supports the Grassley-Wyman bill, Senate Majority Leader Mitch McConnell, R-Ky., will not take action on a bill with such far-reaching consequences during an election year.

A press release states that Pelosi’s plan, called Lower Drug Costs for all Americans, would reduce drug prices by allowing Medicare to negotiate directly with the drug companies. It would also make the lower drug prices negotiated by Medicare available to all Americans, including those with private insurance; cap out-of-pocket costs on prescription drugs for Medicare beneficiaries at $2,000; and reinvest savings from the plan in research of new cures and treatments.

According to The Lancet report, Pelosi’s plan authorizes Medicare officials to negotiate lower prices for 25 to 250 of the most expensive brand-name medications to 120% or less of the volume-weighted average of their cost in Australia, Canada, France, Germany, Japan and the United Kingdom. Drug companies would face “hefty financial penalties if they did not charge private insurers the same lower prices Medicare would pay,” the authors added.

“Though Grassley’s plan would cut patients’ out-of-pocket costs, most costs are already covered by insurance or other programs. Issuing a lower cap would not reduce prices, it would change who pays for health care costs,” March continued. “The Grassley-Wyman bill also increases oversight into the drug distribution market, which is nearly always passed onto the consumer.”

“Her plan allows for renegotiation, which has a greater potential to lower the prices for some drugs,” he said.

As quoted in the Politico report, McConnell said Pelosi’s bill “has no chance” of passing the Republican-controlled Senate, even if it does pass the House.

According to the Congressional Budget Office, or CBO, Pelosi’s plan would save patients and government agencies about $595 billion between 2020 and 2029. Grassley and Wyman’s plan would save about $127 billion from 2019 to 2029.

“The savings impact of the Grassley-Wyman bill is much less because price increases are tied to the consumer price index,” Robert A. Freeman, PhD, a retired professor of pharmacy practice and administration at the School of Pharmacy and Health Professions at the University of Maryland Eastern Shore, told Healio Primary Care.

Bigelow said that although neither bill is likely to pass in its current form, the overlap between the Senate and House bills and Trump’s “blueprint” to lower drug prices may yield a compromise that could pass in this Congress.

“Both the president and also the House bill suggest linking prices charged for Medicare drugs in some way to prices in a comparison group of other developed countries,” he said. “Both the president and the Senate plan would encourage importation of drugs from other countries. Both the House and Senate bills propose to cap out-of-pocket payments for patients under Medicare Part D (albeit at different levels), and both proposals include efforts to spur negotiations on prices (albeit with different ‘carrots and sticks’).” – by Janel Miller