Ibogaine treatment for opioid use disorder: What you need to know

Miami is one of the few places in the United States where researchers study ibogaine, an indole alkaloid found in the root bark of a West African shrub that has hallucinogenic properties.

The substance has been used in Western medicine since the 1860s, according to researchers. Ethnopharmacology studies done more than 50 years ago found that purified ibogaine root had beneficial effects for treating fever, toothache and high BP, according to an article in Progress in Brain Research. Now, ibogaine has become part of a contemporary debate in the medical community over its role in the opioid crisis.

“The benefits of treating opioid use disorder with ibogaine would be immense,” Bryce Pardo, PhD, MA, an associate policy researcher in the areas of cannabis regulation, opioid control, and new psychoactive substance markets, told Healio Primary Care. “But from time to time you hear stories that, in patients with existing CVD, it can cause death.”

Ibogaine is on the Drug Enforcement Administration’s Schedule I list, meaning that the agent has no currently acceptable medical use, there is a high potential for abuse, and those who use it could face arrest. 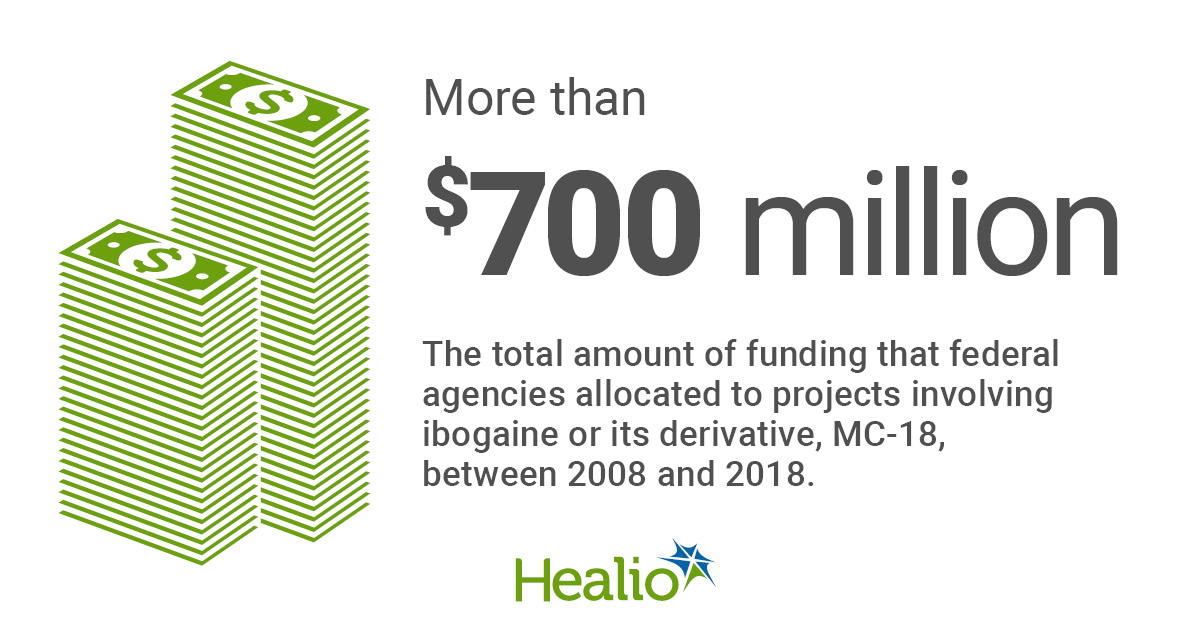 However, some experts like Pardo believe ibogaine could play an important role in mitigating the opioid crisis, which kills 130 Americans every day, according to the CDC.

The National Institute for Drug Abuse (NIDA) considered a clinical development program to evaluate the safety and potential efficacy of ibogaine in the 1990s, according to the agency. It also tasked an independent expert panel “to advise on the merits of pursuing a directed clinical program” on ibogaine. According to NIDA, the panel reviewed preclinical pharmacology, toxicology, pharmacokinetics, human efficacy and safety of ibogaine. Ultimately, most panel members did not endorse the program, so NIDA ceased its research efforts. But that has not completely stopped research into ibogaine.

According to the report published in Progress in Brain Research, a single “heaped teaspoon” of iboga root bark triggers euphoria. An ibogaine dose of 5 mg/kg of a person’s bodyweight appears to cause mostly stimulatory effects. Doses of 10 mg/kg or more of a person’s bodyweight launches a visual phase lasting 1 to 4 hours followed by an introspective stage, the latter of which gives patients insights into their addictive behaviors. Researchers have also found that ibogaine led to resolution of patients’ opioid withdrawal syndrome within 48 hours and was be effective in blocking return to use for years.

Deborah C. Mash, PhD, who has been researching ibogaine’s potential for more than 25 years and is now CEO of a company investigating the agent, told Healio Primary Care that ibogaine “targets several neurochemical systems in the brain at high doses to bring about a rapid reset that blocks opioid withdrawal and craving. Ibogaine could be developed as an in-hospital treatment similar to the medical use of brexanolone, the FDA-approved drug for postpartum depression.”

Mash conducted one of the largest open-label studies of ibogaine. It was done outside the United States and included 191 patients with opioid or cocaine use disorder. The researchers concluded that all participants successfully completed an opioid detoxification, many maintained their drug abstinence for several months and had improved mood and fewer heroin cravings.

She added that a patient looking to take ibogaine for opioid detoxification must not have any heart or liver disease because of drug safety concerns and “that clinical trials are needed to test ascending doses of ibogaine in order to accurately estimate the safe and effective maximum tolerated dose.” 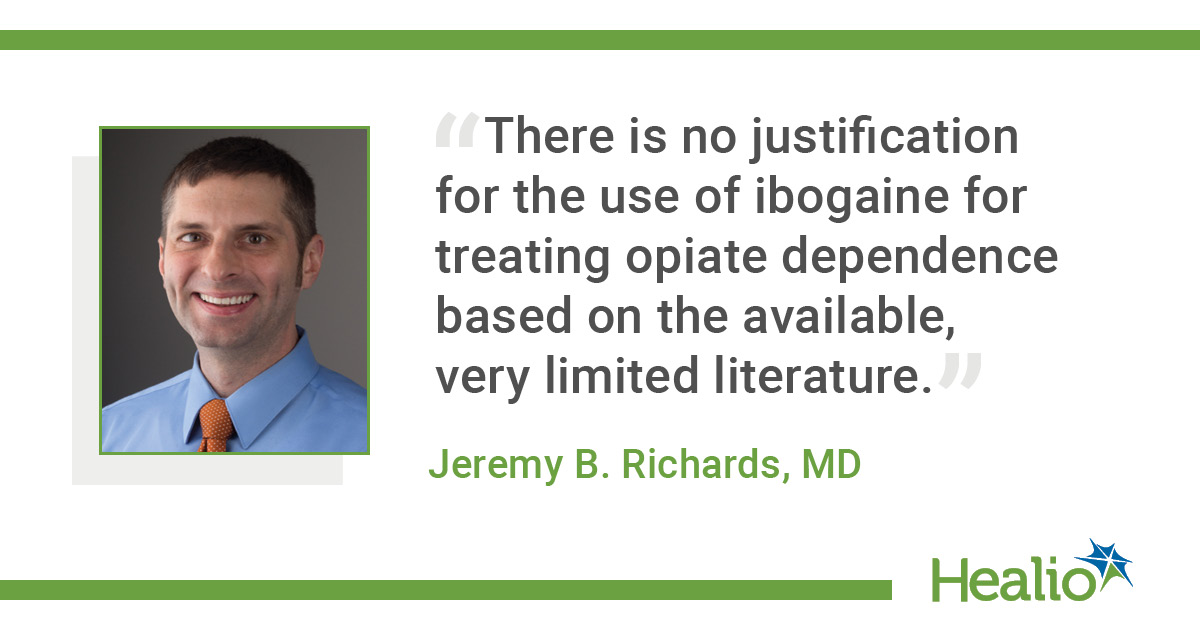 Ibogaine’s opponents cite the lack of studies with large cohorts, its Schedule I status and the adverse events that are associated with its use — including dizziness and lack of muscle movements — as good reasons to stay away from the drug.

Richards told Healio Primary Care that “there is no justification for the use of ibogaine for treating opiate dependence based on the available, very limited literature.”

The patient’s death prompted Richards and some of his colleagues to search the medical literature for other patient experiences with ibogaine and found several case reports of serious adverse events associated with ibogaine: a 25-year-old man with heroin addiction who died from multiorgan system failure, likely due to aspiration and pneumonia after ingesting ibogaine; a 31-year-old woman who had a seizure-like episode; and a 49-year-old man who developed a rare form of polymorphic ventricular tachycardia.

Other complications tied to ibogaine use include cardiac toxicity with possible mechanisms of bradyarrhythmia and/or possible QTc prolongations; EKG changes; and schizophrenia, psychosis and relapses of drug use, according to researchers.

Mash said that case reports do not tell the whole story involving ibogaine.

“You can’t equate taking ibogaine outside of supervised medical use as equal to a drug that is studied in clinical settings by qualified doctors and researchers.”

Nora D. Volkow, MD, NIDA’s director, recently wrote in The Lancet that medications other than methadone, buprenorphine and extended-release naltrexone are needed to turn the tide in the opioid epidemic.

She added that the effectiveness of those drugs is hampered “by problems at all levels of the care cascade, including ... entry into treatment, and retention in treatment,” various dosing levels, durations of treatment and, depending on the medication, risks for adverse events such as fever, rhinorrhea, myalgia, arthralgia and abdominal pain.

Pardo, who has more than a decade of experience working with governments in crime and drug policy, said NIDA’s own assessment bolsters the need to research ibogaine as a treatment for opioid use disorder.

“You would need fewer treatment episodes, sometimes as little as one,” he said. “You don’t have worry about daily and weekly redosing like we do with buprenorphine. The stigma with opening methadone treatment clinics is limiting. We’re currently treating opioid use disorder with one hand behind our back. Adding ibogaine would be a huge leg up for some.” 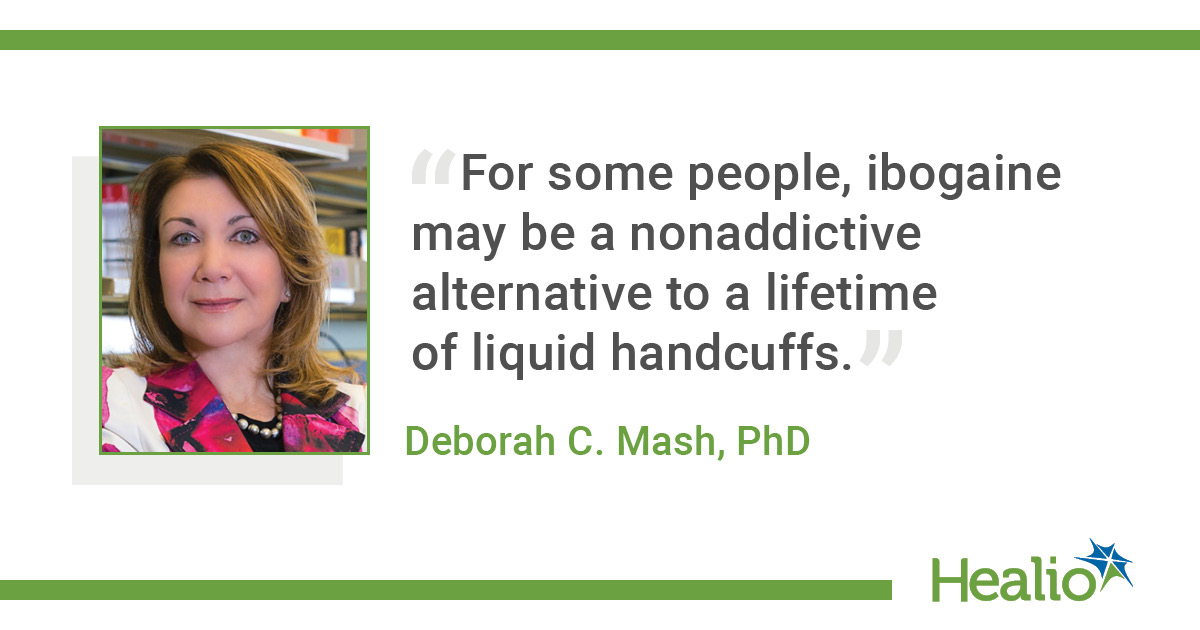 NIDA said it will revisit ibogaine as a treatment option “if a meritorious grant application is received.” Between 2008 and 2018, NIDA and other federal agencies have allocated more than $700 million to projects involving ibogaine or its derivative, MC-18, according to the online database Federal RePORTer.

Mash told Healio Primary Care that she was “extremely hopeful” the NIDA will resume the ibogaine-directed clinical program that the agency abandoned in 1995.

“Think about the choices we have for treating opioid use disorder available today,” she said. We have naltrexone, which is an abstinence-based therapy that is given after completion of opioid detoxification. “Medication-assisted therapy including methadone and buprenorphine, although they help many people, are opioid substitution therapies. We have had methadone, which is an old drug that has been in use for many decades. For some people, ibogaine may be a nonaddictive alternative to a lifetime of liquid handcuffs.”

Richards is not as optimistic about ibogaine’s potential.

“Ibogaine does not have magical properties,” he said in the interview. “It is not a 'magic bullet' to treat opiate dependence, and claims of its efficacy are based more on hope and beliefs than on quantitative, rigorous medical evidence. The risks of taking ibogaine clearly do not outweigh the potential and unproven benefits.”

Mash argued that clinical research is precisely what is needed to determine the risks and benefits of ibogaine. Citing her own research, she said “the risks of taking ibogaine for medically assisted detoxification in the 800 to 1,000 mg dose range are low.” – by Janel Miller