HCV screening varied among practices that served disadvantaged populations in the United States despite the implementation of an intervention to improve adherence to U.S. Preventive Services Task Force guidelines, according to a study published in the Annals of Internal Medicine.

“This study offers evidence regarding the difficulty of operationalizing national guidelines without substantial public policy and payment systems that support the full continuum of care for low-income and even uninsured patients,” Barbara J. Turner, MD, MSEd, a clinical professor of medicine in the Keck School of Medicine at the University of Southern California, told Healio Primary Care.

In 2013, the USPSTF recommended that physicians screen baby boomers — those born between 1945 and 1965. The task force has since called for the screening of all U.S. adults.

To improve physicians’ adherence to the 2013 USPSTF recommendation, Turner and colleagues implemented the Screen, Treat or Prevent Hepatocellular Carcinoma (STOP HCC) intervention. The intervention focused on identifying eligible patients who had never been tested for anti-HCV antibody using a best practice alert on the EHR with an order for testing that required clinician approval. In addition, physicians and staff participated in presentations about the benefits of screening patients for HCV to prevent cirrhosis and HCC. The intervention also defined the procedures and responsibilities of staff during HCV screening of uninsured patients. Additionally, health care providers and patients could access educational materials and clinical protocol information through a website. 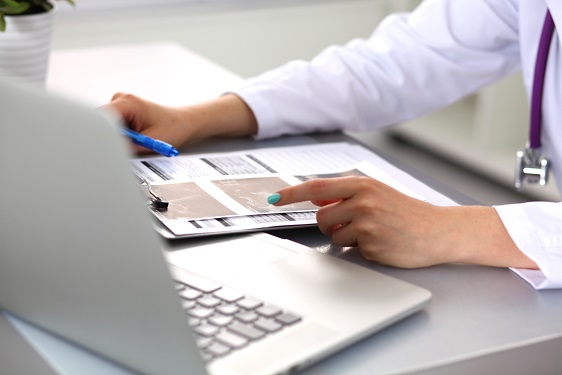 HCV screening varied among practices that served disadvantaged populations in the United States despite the implementation of an intervention to improve adherence to U.S. Preventive Services Task Force guidelines, according to a study published in the Annals of Internal Medicine.
Source: Shutterstock

The researchers included in their study five federally qualified health care centers and a family medicine residency program that served low-income communities that had diverse, mostly Hispanic populations with high rates of cirrhosis and HCC.

A total of 349 (2.6%) of patients screened were diagnosed with chronic HCV.

“In addition to guidelines for screening, we need to focus on developing the infrastructure to eradicate this treatable infection that causes many thousands of deaths annually in the United States through chronic liver disease and its complications,” Turner said.

In August 2019, USPSTF released a draft recommendation statement that called for HCV screening in adults aged 18 to 79 years.

“Given our research and others that have shown implementation of baby boomer HCV screening guidelines has been limited at best, especially in practices that serve the higher risk populations, it will be an even more significant challenge to implement these recommendations,” Turner told Healio Primary Care.

She explained that while most baby boomers are eligible for Medicare, which covers the cost of testing and treatment, Medicaid has restrictive guidelines for which patients with chronic HCV can receive treatment.

Although there are pharmaceutical assistance programs in place to help patients pay for treatment, Turner noted that “this is a fragile infrastructure that is unlikely to achieve the goals of diagnosing and treating chronic HCV infection in all adults, even though we know that HCV is increasingly being spread among younger age groups.” – by Erin Michael

Disclosure: Turner reports salary support from ACP and the University of Texas Health Science Center at San Antonio, grants from the Cancer Prevention & Research Institute of Texas and project support through the CMS Section 1115 Medicaid waiver program during the conduct of the study.

Authoritative recommendations for the screening for HCV among baby boomers in the United States have been around for at least 7 years. However, numerous studies have shown low levels of actual screening in most care settings, except in circumstances such as the Veterans Health Administration, and studies and special programs with high levels of commitment. The challenges that actually exist in real-world settings are manifold. In order to examine the effect of a dedicated, multifaceted program on screening, evaluation and treatment for HCV among low income and uninsured/underinsured baby boomer patients in federally qualified health centers and a family practice residency program, Turner, et al, created a program to optimize systems based on an established framework in the “real world.” Screening rates at study sites ranged from 20% to 71% and only 36% of uninsured with HCV, who were care managed, were treated with direct acting agents (DAA) despite high fidelity to the program implementation protocol (albeit with a cure rate at the expected level of 95%). Even among the 23 insured patients, only nine (39%) completed therapy. Men had a higher prevalence of infection, but were less likely to be screened, perhaps highlighting the difficulty of getting men into primary care for screening, or the possibility that testing in men may be more often based on risk perception. Screening success was dependent on education, commitment and laboratory testing.

Many of the challenges identified in this study have been recognized previously, not just for implementation of HCV guidelines, but for a variety of guidelines for other conditions. Is the glass half empty or half full? Half empty in that, even with a well-designed program to enhance HCV management, success can fall short; the critical factors are sufficient leadership engagement, effective champions and supportive infrastructure and operations. Half full in that the investigators were able to dramatically increase HCV screening of baby boomers from 0.8% to 48% overall and they were able to institute a framework across multiple sites and evaluate its implementation and operation. While the challenges to universal baby boomer screening have been substantial, the proposed USPSTF recommendation for universal screening of all Americans 18 to 79 years old is going to be even more challenging, particularly in the newly added 19 to 55 year old cohort who have the same barriers to screening as baby boomers, but are often more likely to get less consistent primary care. The findings of this study of optimizing HCV screening and care in a real-world setting can help to guide clinical interventions designed to achieve goals of the National Viral Hepatitis Action Plan and support new, expanded screening recommendations.