Children in a New England state were less likely to be seen by family physicians, particularly in rural areas, according to an analysis recently published in Annals of Family Medicine.

Previous studies on the topic were done only by survey and did not include population-level data, according to Richard C. Wasserman, MD, MPH, a pediatrician at the University of Vermont Larner College of Medicine, and colleagues. To conduct a more thorough, population-based analysis, researchers reviewed all-payer claims from 184,794 children aged 21 years and younger in Vermont from 2009 to 2016.

Researchers also found that compared with urban children, children from rural towns had greater odds of visiting family practices. But when the data were stratified by the rural-urban commuting area classification system — which accounts for urbanization and population density — children had 3% lower odds of attending a family practice in urban areas and 8% lower odds in isolated or small rural towns. 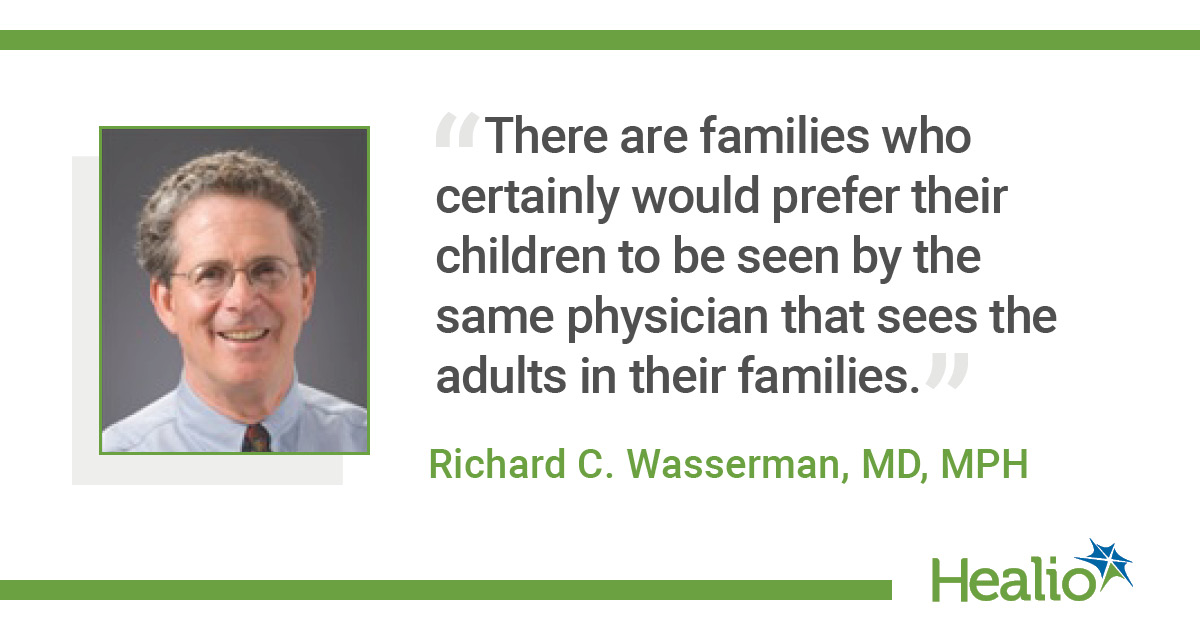 Wasserman told Healio Primary Care that the findings are concerning.

“There are families who certainly would prefer their children to be seen by the same physician that sees the adults in their families,” he said.

Researchers also noted that if the downward trend continues, the description of discipline of “family medicine” might need to be reconsidered. In addition, health care disparities could worsen as more children would need to transition from pediatric-only to adult-oriented care – a particular challenge for those with chronic conditions. The findings also have implications for future physician training and practice sustainability, they wrote.

Although Wasserman and colleagues’ findings were limited to Vermont, he suggested the findings could be duplicated in other rural areas.

An appropriate shift in medical care?

Suzanne Berman, MD, FAAP, a pediatrician with Plateau Pediatrics in Crossville, Tennessee, who was not affiliated with the study, told Healio Primary Care that she has witnessed firsthand the practice patterns captured in the study, but she does not see cause for concern like Wasserman.

“Since pediatricians have more training in the care of children and adolescents than family physicians, this shift doesn’t seem to be inappropriate,” she said. “With the aging of the American population, this might simply reflect the need for family physicians to redeploy their resources to care for more seniors, leaving more of the pediatric share to pediatricians. Family medicine, being as primary care as you can get, is uniquely prepared to pivot in this way as population shifts the demand.”

“If this impression is correct — that pediatricians are somewhat more likely to do well visits than family physicians — and all other things being equal, pediatricians will have more attributed patients over time, according to the authors’ model,” Berman said.

Wasserman said training more family medicine doctors in obstetrics would “provide a ready population of infants that can be followed through their lifetime” and thus reverse the trend that he and his colleagues identified. However, he acknowledged that the solution may be easier said than done.

“Providing obstetrical care is a lifestyle choice that involves a certain amount of disruption,” Wasserman said. “If one of your patients go into labor, you have to find someone to attend to your patients while you tend to the patient in labor. This can be especially hard in rural areas.” – by Janel Miller

Disclosures: The authors and Berman report no relevant financial disclosures.