Death from preventable causes more common in rural vs. urban US

The CDC said it has identified a “persistent and striking gap” in the percentage of rural and urban Americans who die from the top five preventable causes.

The findings are based on mortality data from the National Vital Statistics System in United States residents aged 80 years or younger.

Researchers found that rural Americans are more likely to die from cancer, heart disease, chronic lower respiratory disease, stroke and unintentional injury than their urban counterparts. The five causes of death were responsible for 61% of all deaths in 2017, they said, and that the rate of unintentional injury deaths has “accelerated” in recent years across the United States, which can be explained by an increase in opioid overdoses.

In previous interviews, doctors and health policy experts told Healio Primary Care that the reasons for the health gap between rural and urban areas include inadequate clinical resources at various critical points in the health care spectrum. 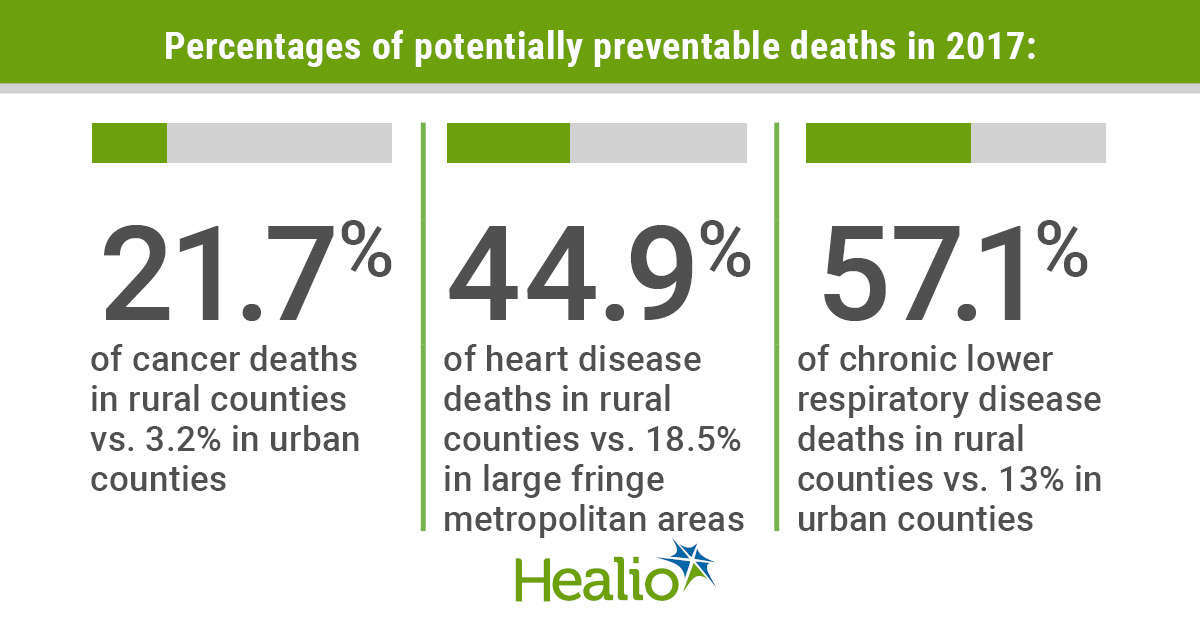 Percentages of potentially preventable deaths in 2017.

“It’s very difficult to translate a quality or a screening or a treatment protocol from an urban area to a rural area that has lots of resource needs,” said Art Kaufman, MD, clinician and vice chancellor for community health at the University of New Mexico.

A lack of nearby clinical resources is especially problematic in rural areas, according to Vaughn Morgan, MD, a family medicine clinician at Community Health Centers of Central Wyoming.

“Here in Dubois, we are more than an hour away from even a qualified ER If you fall off a horse near Jackson, Wyoming, and rupture your spleen, that is likely survivable because the emergency room/hospital in Jackson has a blood bank and a surgeon available 24/7; if that same accident happens 75 to 80 miles away near Dubois, you are very likely going to bleed to death before you even make it to an ER,” he said.

In the CDC report, researchers wrote that public health departments and decision-makers, armed with these new findings, can identify and monitor public health problems and develop interventions that could have the greatest impact.

“We need to redouble our prevention efforts to reach those living in rural areas, where risks tend to be higher,” CDC Director Robert R. Redfield, MD, said in a press release. According to the CDC, health professionals should:

Healio Primary Care has reported on additional ways to close the mortality gap in rural areas, including operating satellite clinics, establishing and cultivating partnerships between rural and urban practices through telemedicine, and engaging in what one doctor called “max-packing” — consolidating as many medical needs as possible into each office visit. - by Janel Miller

Disclosures: The authors and Redfield report no relevant financial disclosures.