Sleeping on back in third trimester linked to reduced birth weight

Women who fall asleep in a supine position during the third trimester of pregnancy are more likely to have infants with reduced birth weight, according to findings published in JAMA Network Open.

“Women who go to sleep supine in the third trimester are, on average, 3 times more likely to have a baby who is small for gestational age, with an average decrease in birth weight of 144 g — an equivalent magnitude as smoking 10 cigarettes per day in pregnancy,” Ngaire H. Anderson, MBChB, PhD, FRANZCOG, senior lecturer in the department of obstetrics and gynecology at the University of Auckland, New Zealand, told Healio Primary Care.

Researchers explained that while it is common to switch positions while sleeping, pregnant women stay in the position they fall asleep in longest.

Anderson and colleagues explored the association between sleep position and birth weight by analyzing findings from four case-controlled studies that were conducted in Australia, New Zealand and the United Kingdom. 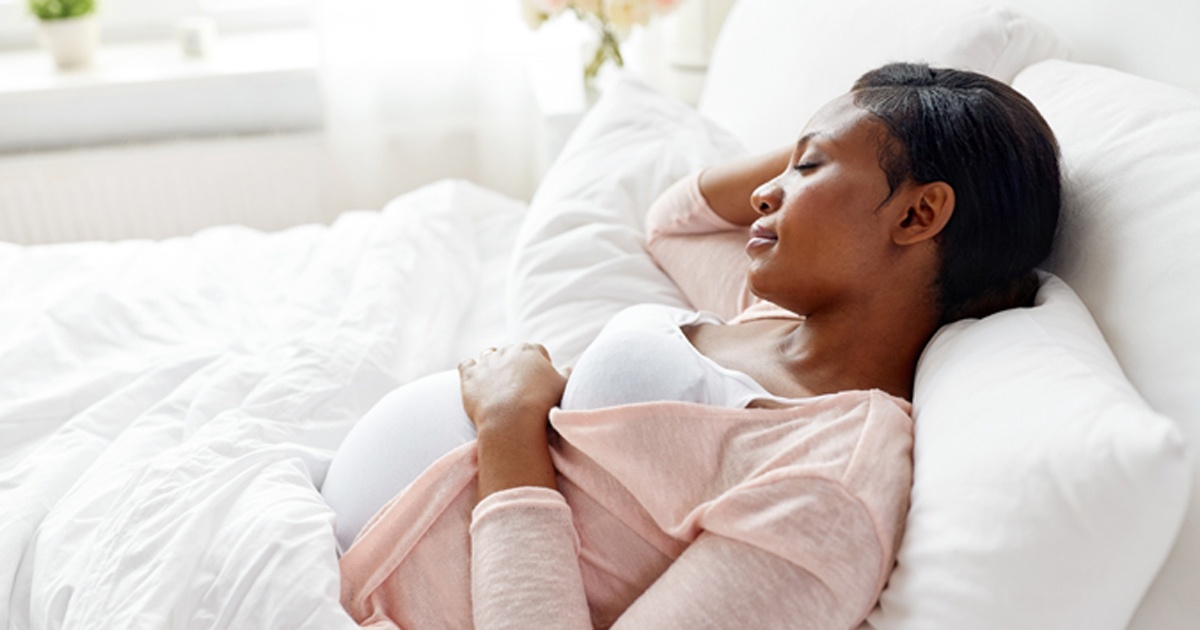 Women who fall asleep in a supine position during the third trimester of pregnancy are more likely to have infants with reduced birth weight, according to findings published in JAMA Network Open.
Source: Adobe Stock

As there is no international consensus on the most appropriate method to define normal birth weight, researchers evaluated outcomes using two common standards. The first, INTERGROWTH-21st centiles, is a birth weight standard developed from a low-risk birth cohort and adjusted for infant sex and gestation at birth. The second, customized centiles, is based on fetal growth standard and adjusted for maternal height, weight, parity and ethnicity in addition to infant gestation and sex. Lower birth weight infants were categorized into lower centiles.

A total of 1,760 women were evaluated in the study, 3.2% of whom reported that they usually went to sleep on their back in the last week to 4 weeks.

Researchers found that falling asleep in the supine position was associated with a nonsignificant increase in the odds having an infant in less than the 50th INTERGROWTH-21st centile. However, they identified the supine sleep position with doubled odds of infant birth weight below the 50th customized centile (adjusted OR = 2.12; 95% CI, 1.2-3.76) compared with those who slept in other positions.

In addition, there was a 3-fold increase in the odds having an infant small for gestational age among those who slept on their back compared with those who did not based on INTERGROWTH-21st standards, with a nonsignificant increase based on the customized standards.

Anderson noted that a possible explanation for the association between reduced birth weight and mothers who fell asleep on their back in the third trimester of pregnancy is that their uterus presses against major blood vessels and reduces the blood flow to the womb.

“We believe education is key to encouraging women to fall asleep on their side,” Anderson said. “Informing women that side sleeping is best for baby's growth and well-being is a straightforward message and should be a routine part of antenatal education.” – by Erin Michael

This study was a secondary analysis of data from control women from an individual participant data meta-analysis study investigating stillbirth. The control women were those who had a live birth and included those from several different countries. Self-report of maternal going-to-sleep position was used to determine the association with birth centile at delivery, and the study found that women who went to sleep on their back had smaller babies, although only a small number (n = 57) of women reported supine sleep. Since there is no international consensus on the best way to measure birth centile, different measures were employed to look at birth size —INTERGROWTH-21st and customized birth centiles. The first measures growth based on low-risk pregnancy norms while the latter is customized to account for several variables known to affect birth size. While both measures found increased odds of babies born in less than the 50th centile with maternal supine sleep, one found a threefold increase in babies born small for gestational age while the other did not find a difference in small for gestational age. Nonetheless, this could be related to the small numbers of supine sleepers. These findings support a small study that my group conducted in Ghana in 2012, where we also found that women who reported supine sleep were at increased odds of having a low-birth-weight baby.

These findings are important because they are biologically plausible and suggest that going to sleep in the supine position impacts fetal growth. While we don't know the exact mechanism, it is likely that it is related to compression of the inferior vena cava with subsequent reduced blood flow to the fetus. The same group of authors has previously shown that maternal supine sleep is related to an increase in late stillbirth (stillbirth on or after 28 weeks' gestation); taken together these data point to maternal sleep practices as being a modifiable risk factor for fetal well-being. Nonetheless, all data in this study were based on self-report. In order to strengthen the current findings objective measurements of maternal sleep are urgently required. Only then will we know how supine sleep — how much, how long, and at which key gestational ages — is clinically relevant. Until then, however, it seems prudent to advise women to minimize the time they spend supine in the third trimester.