Sudden cardiac death — the leading cause of sudden death among high school and college athletes in the United States — is not something that can be easily predicted.

The event occurs in approximately 300,000 people each year, affecting patients of all races and ages, as well as patients who maintain an active lifestyle and those who are sedentary, according to researchers.

Peter S. Spector, MD, a cardiologist at the University of Vermont College of Medicine, wrote in Heart that identifying sudden cardiac death in patients before their first episode “is one of the major dilemmas” in managing the disease.

Sumeet S. Chugh, MD, associate director of the Cedars-Sinai Smidt Heart Institute in Los Angeles, agreed that recognizing who is at risk for a sudden cardiac death event poses a challenge. 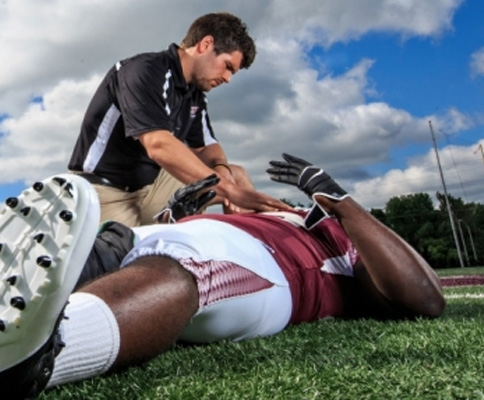 Sudden cardiac death — the leading cause of sudden death among high school and college athletes in the United States — is not something that can be easily predicted.

“We’ve made some progress, but we have a lot more research to do before we can say we’ve perfected our skills at this kind of risk prediction,” he said in an interview.

The American Heart Association has a 14-point checklist that can help clinicians ascertain an athlete’s risk for sudden cardiac death. Some of the questions include asking patients if they experience chest pain, discomfort, tightness or pressure in the chest when they engage in activities; if they have a heart murmur; if have high systemic BP; and if a family member has arrythmia or died from heart disease before the age of 50 years. The physical exam consists of, among other things, taking the patient’s brachial artery BP in both arms and femoral pulse, looking for the physical stigmata of Marfan syndrome and checking the patient for a heart murmur in both sitting and standing positions.

“This is really the best way [to predict sudden cardiac death] so far, but it’s not perfect,” Chugh said in the interview. “If we start doing sophisticated cardiac testing on all athletes, it’s not going to be cost-effective. We could [also] find some abnormalities that have nothing to do with sudden cardiac death, and then the individual could go through a lot of other tests and conditions that were never necessary.”

“It doesn’t detect 100% of children who have” a disease that could lead to sudden cardiac death, he said. “We [have another] set of universal questions that we ask that will determine if they have any risk or possible risk for a heart condition that might result in sudden cardiac death.”

Some of these additional questions ask about the athlete’s personal history of fainting, fatigue, problems breathing, seizure disorders and if any of the athlete's family members have experienced unexplained fainting or seizures or died unexpectedly or in an unexplained manner before the age of 50 years. The full list can be found on the Sudden Arrhythmia Death Syndromes Foundation’s website.

Smurawa said an athlete who answers “yes” to any of these questions should be “further evaluated by the cardiologist who does a comprehensive exam that includes an ECG and an echocardiogram that looks for both structural and electrical abnormalities that might lead to sudden cardiac death.”

He added that based on an athlete’s answers and test results, clinicians should “make a recommendation [to the patient] regarding physical limitations.” According to Smurawa, some athletes may also be prescribed medication or have an implantable cardioverter defibrillator installed.

When an event occurs

Only 7% of those who experience a sudden cardiac death event outside a hospital setting will survive, Allison G. Yow, DO, a professor of internal medicine at the Lincoln Memorial University-DeBusk College of Osteopathic Medicine in Harrogate, Tennessee, and colleagues wrote in Sudden Cardiac Death.

Naomi Kertesz, MD, a cardiologist at Nationwide Children's Hospital in Columbus, Ohio, said in an interview that when a sudden cardiac event occurs, the time it takes to start treatment can make a substantial difference in survival.

“You have 3 to 5 minutes to restore a normal heart rhythm after the athlete hits the floor before a patient starts to suffer irreparable brain and organ damage and is at risk for death, Kertesz said. “Not 3 to 5 minutes after you know there’s a problem.”

Common methods for ascertaining what triggered the first event can include ECGs; echocardiograms; coronary angiographies; exercise and electrophysiology tests; and cardiac MRIs, according to Yow and colleagues. Once the cause is determined, athletes are prescribed medication, or they can receive an implantable cardioverter defibrillator (ICD).

According to the National Athletic Trainers Association, medical professionals, including members of that society, should have an emergency action plan that details what to do if a sudden cardiac event occurs.

Kertesz trains the nonmedical professionals: she prepares students, faculty and staff members at schools by running AED drills as part of Project ADAM— an initiative named after a student athlete whose life was cut short by sudden cardiac death. She encouraged her peers to follow her lead to help increase survival rates.

“Every school in this country does fire drills,” Kertesz said. “Do you know the last time a child died in a school fire in the United States? The 1950s. All we ask is that schools know who’s calling 911, who’s getting the AED ... and how to use the AED.”

Another approach to increasing survival rates involves asking family members of those who experienced a sudden cardiac death event to undergo screening and where available, undergo cardiomyopathy or genetic channelopathy to ascertain their risk, authors of an Annals of Internal Medicine report wrote.

The authors also said family members who have lost a relative to sudden cardiac death should consider molecular autopsy or postmortem genetic testing, especially “if the anatomical autopsy is unremarkable and the other evidence suggests sudden arrhythmic death syndrome.”

Some experts consulted for this story said updated clinical tools would help identify those at risk for surrounding sudden cardiac death.

“The discovery of novel risk predictors that can be measured using inexpensive clinical tools, would have great potential to decrease the burden of sudden cardiac death,” Chugh said.

Smurawa said more financial resources are needed in schools, which would help lower the incidence of sudden cardiac death.

“Certified athletic trainers ... are the key advocates for the athletes at the school. [But] some states in some areas may not have athletic trainers because they can’t afford it or don’t have access to it,” he said in the interview.

Spector wrote in Heart that accurate risk assessment tools and more efficient ICDs would cut down on sudden cardiac death occurrences. He added that “future research should be directed toward elucidating the mechanisms specifically responsible for initiation and maintenance of [ventricular fibrillation].”

“Ultimately, a better understanding of the factors responsible for adverse electrical remodeling may improve our chances of intervening to prevent the arrhythmogenic milieu that develops in the cardiomyopathic heart,” Spector added.

The answer to improved screening may lie in genetics, according to Jamie L. Vandemberg, PhD, of the Victor Chang Cardiac Research Institute in Australia, and colleagues.

In F1000 Research, they wrote that deeper phenotyping combined with “more sophisticated and larger electronic health record databases will accelerate discovery in the biomedical sciences, and this will ultimately pave the way for more accurate diagnoses with greater mechanistic insights” and “help steer the implementation of preventative strategies at an earlier stage.” – by Janel Miller