Marijuana use during pregnancy: What clinicians need to know

These findings recently prompted U.S. Surgeon General Jerome Adams, MD, to issue a warning to pregnant women, along with teenagers and young adults, about the dangers associated the drug.

“This ain’t your mother’s marijuana,” he said at a press conference.

Adams encouraged physicians to learn all they could about marijuana.

Healio Primary Care spoke with experts about the evidence regarding marijuana use among pregnant women, and what clinicians should know. 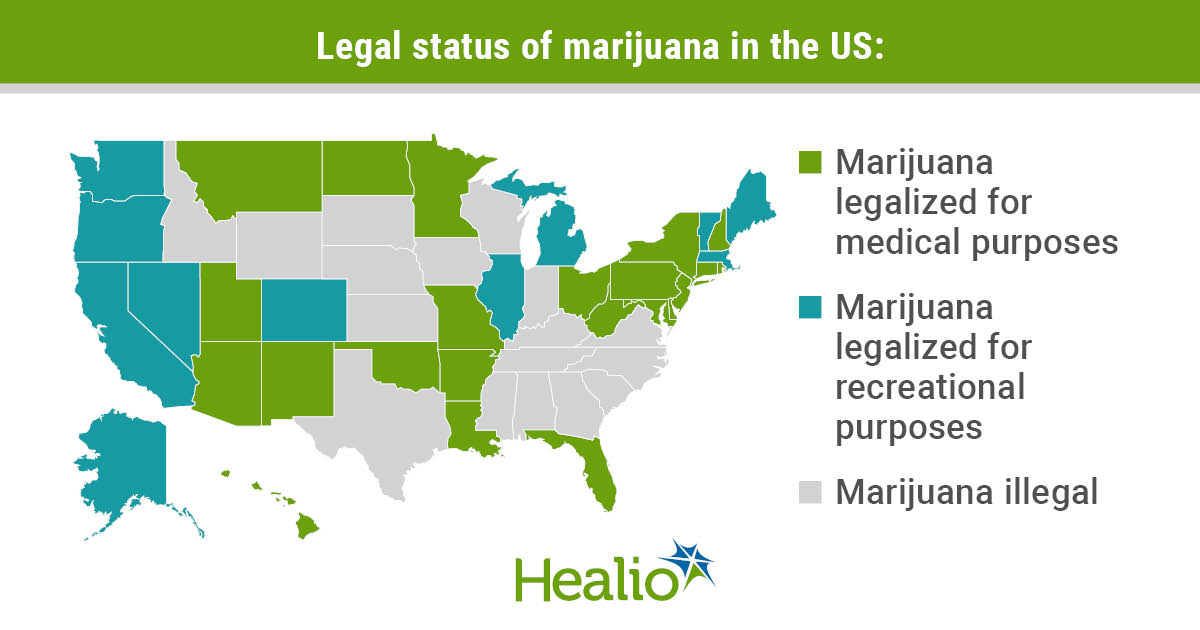 More than two dozen states and the District of Columbia currently have laws that allow marijuana use in some form, according to Governing.

Some pregnant women are more likely to use marijuana use than others, according to study findings published in the International Journal of Epidemiology. Researchers found that, compared with women who did not use marijuana while pregnant, women using marijuana during pregnancy were younger, had lower educational levels and used alcohol more often.

Sehun Oh, PhD, an assistant professor at The Ohio State University College of Social Work, co-authored another study that analyzed marijuana use among more than 7,600 women who completed the National Survey of Drug Use and Health.

“We found that prenatal cannabis use doubled among nonmarried women — from 5% in 2005 to 10% in 2014,” he told Healio Primary Care. “On the other hand, only 1% of married pregnant women used cannabis, and the rates remained relatively stable throughout the period.”

Unmarried pregnant women who were diagnosed with anxiety and depression within the past year were also likely to use marijuana, Oh added.

“Increased attention should be paid to reducing prenatal marijuana use among unmarried women. Findings also suggest the need to attend to unmarried pregnant women’s mental health problems as well as their physical health risk behaviors,” Oh and colleagues concluded.

The American College of Obstetricians and Gynecologists’ Committee Opinion on marijuana use during pregnancy and lactation encourages physicians to ask all pregnant women about their marijuana use for nonmedical reasons.

Nora Volkow, MD, director of the National Institute on Drug Abuse, told Healio Primary Care that the Tobacco, Alcohol, Prescription Medication and Other Substance Use (TAPS) tool is a validated screening tool that physicians can use for that purpose.

“Pregnant patients should also be asked about any medications they are taking,” she added.

Marijuana’s dangers before, during and immediately after pregnancy

Maternal marijuana use before and during pregnancy has been associated with externalizing problems among offspring, which often led to aggressive and rule-breaking behavior as they grew older, according Hanan El Marroun, PhD, of the department of child and adolescent psychiatry at Sophia Children’s Hospital in Rotterdam, the Netherlands, and colleagues.

The findings were from a population-based cohort that included nearly 200,000 children whose mothers smoked marijuana.

The National Academies of Sciences, Engineering and Medicine analyzed several systematic reviews and studies. They found that mothers who smoked marijuana, either before or during pregnancy, had a significantly increased risk for anemia. There was mixed evidence whether these women were more likely to experience precipitous labor and require manual removal of the placenta. Women who used marijuana at least once a week before and throughout pregnancy gave birth to offspring that were approximately 84.2 grams lighter than offspring of women who did not use marijuana, the findings showed.

The ACOG Committee Opinion cited a study that concluded marijuana users had somewhat higher stillbirth rates vs. nonusers. However, the organization also warned that the data could not be adjusted for tobacco use and that the results became statistically insignificant when the estimates were pooled.

The National Academies National Academies of Sciences, Engineering and Medicine also found that marijuana use during pregnancy was associated with an increased risk for a shorter gestational age and neonatal ICU use. The evidence was inconsistent on how marijuana use impacted a newborn’s head circumference and infant Apgar score, particularly at 1 to 5 minutes.

Ellie Grossman, MD, MPH, primary care lead for behavioral health integration at the Cambridge Health Alliance in Massachusetts, said it is important to not to refer to marijuana as illicit or illegal when treating pregnant women who use the substance.

“Women who are using marijuana to relieve a pregnancy-associated symptom should be offered options with stronger evidence for benefit and safety,” she told Healio Primary Care. “And of course, we should offer this advice in a compassionate manner, allowing women to seek help while not worrying about punishment. This ensures that the woman will stay connected to the health care system and get appropriate prenatal care.”

“The perceived lack of risk for cannabis in pregnancy suggested by its high use among pregnant women suggests the need for education both before women come for prenatal care, and by providers during pregnancy,” she added

Volkow said clinicians should encourage pregnant women who use marijuana to discontinue its use.

“Refer them to appropriate resources to help with cessation, if necessary,” she said. “They should also counsel these women about the lack of safety data and efficacy data to treat nausea and vomiting or another medical condition during pregnancy and the possible adverse effects of THC on the developing fetus.”

Volkow added that PCPs unaware of other, nonmarijuana treatment options may find that OB/GYNs have this information.

Grossman, who is also an instructor at Harvard Medical School, also noted the importance of honesty with patients regarding the paucity of reliable research surrounding the pros and cons of medical marijuana use.

“While it is true that there is not a lot of great evidence for marijuana being effective, it does not mean that it will not treat the conditions it has been linked to. It just means we do not know yet,” she said in an interview. “We owe it to our patients to help them understand that everything they see on the internet or hear from their friends might be true and it also might not be true.”

Thirty-three states that have passed laws that allow some type of marijuana usage, according to Governing.com, a website that covers politics, policy and management for government leaders and employees.

However, the Drug Enforcement Administration classifies marijuana as Schedule I substance, meaning the drug has “high potential for abuse and the potential to create severe psychological and/or physical dependence.” Therefore, using it breaks federal law.

Surgeon General Adams said that the legal contradiction means physicians and patients should look at data involving marijuana use to ascertain what is best for their patients or themselves.

“The job of the Surgeon General (and other federal health-related agencies) is to make the public aware of health trends to help them understand how to respond to those trends and the potential downside to those trends,” he said at the press conference.

“Once upon a time tobacco was considered safe for you, and alcohol was safe for you, and now those products have warning labels. This is just a continuation of the efforts we’ve been undertaking throughout the history of the Surgeon General’s office.”

The lack of federal regulation regarding marijuana means there are no official guidelines on marijuana dosing.

Although the ACOG said smoking marijuana “cannot be medically condoned during pregnancy and lactation,” the data show that there are women who engage in the behavior, making it likely PCPs could encounter such a patient.

Grossman stressed — as did ACOG — that other alternative therapies should be considered in women thinking of becoming pregnant or are pregnant.

She provided some dosing tips in the rare instance where a nonmarijuana treatment cannot be found and a pregnant woman plans to use marijuana despite awareness of potential risks.

“Start patients with a small amount of a legally-approved product and advise them to report back to you on how it makes them feel,” she said. “You and the patient need to watch for several things: difficulty with concentrating or thinking, mood changes and breathing changes (if using an inhaled product)..”

ACOG Committee Opinion. Marijuana Use During Pregnancy and Lactation.