Adults attempting to stop smoking were more likely to have sustained abstinence at 1 year when using e-cigarettes compared with nicotine-replacement products, according to a study published in the New England Journal of Medicine.

“The trial provides some indications of why e-cigarettes had better results than nicotine-replacement treatments,” Peter Hajek, PhD, of Queen Mary University of London, and colleagues wrote. “As in previous studies, e-cigarettes were more effective in alleviating tobacco withdrawal symptoms and received better ratings than nicotine-replacement therapy. They may also have allowed better tailoring of nicotine dose to individual needs.”

Participants in the nicotine-replacement group chose from a variety of products, including patch, gum, lozenge, nasal spray, inhalator, mouth spray, mouth strip or microtabs, which they then utilized for up to 3 months. Participants in the e-cigarette group were given an e-cigarette starter pack, which included a second-generation refillable e-cigarette with one bottle of nicotine e-liquid and a recommendation to later purchase their preferred flavor and strength of e-liquid.

For both groups, multisession behavioral support with local clinicians was provided for at least 4 weeks.

The primary outcome of the study was 1-year sustained abstinence.

When considering respiratory symptoms, researchers found that the e-cigarette group had greater declines in the incidence of cough and phlegm production from baseline to 52 weeks than the nicotine replacement group (RR for cough = 0.8; 95% CI, 0.6-0.9; RR for phlegm = 0.7; 95% CI, 0.6-0.9) but that there were no significant differences between the two groups in the incidence of wheezing or shortness of breath. 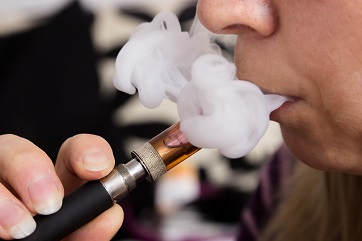 “Further trials are needed to determine whether our results generalize outside the U.K. services,” the researchers wrote. “In addition, e-cigarette studies are needed that compare different levels of support. This is important for focusing public health messages on either encouraging smokers to switch to e-cigarette use within support services or recommending use with less intensive or no support.”

In a related editorial, Belinda Borrelli, PhD, of Boston University, and George T. O’Connor, MD, of Boston University School of Medicine, wrote: “The use of e-cigarettes by pregnant women, who were excluded from the trial by Hajek et al, raises special safety concerns. Although nicotine-patch use during pregnancy is associated with a higher rate of smoking cessation and better child-development outcomes than placebo, there are no such reassuring data for e-cigarettes. An additional societal consideration is the effect of adult e-cigarette use on children and young adults. Adult use may not only expose children to e-cigarette vapor but also models addictive behavior. There is substantial evidence that e-cigarette use by youth increases the risk of smoking combustible tobacco cigarettes, and the U.S. Surgeon General has recently declared e-cigarette use among youth ‘an epidemic.’” – by Melissa J. Webb