Although they represent an estimated 38 million Americans, people with migraine continue to be an underserved and undertreated population. Studies have found that only 40.8% of people with chronic migraine present for care; of these, only 24.6% are diagnosed correctly and of those diagnosed, only 44.4% receive appropriate acute care. Even when patients have been properly diagnosed and are on an appropriate medication, they frequently do not remain on these medications, according to Amaal Starling, MD, assistant professor of neurology in the Mayo Clinic College of Medicine.

"The main reason for this, I think, is because these medications are generally ineffective for many, many, patients,” Starling told Healio Family Medicine. “In addition, many of these current medications have a lot of side effects.”

The lack of efficacy and significant side effects of current migraine medications is, in part, because these treatments were not designed specifically for the treatment of migraine. This leads to “off-target toxicity,” Starling said.

“These medications were developed to treat mood disorders, depression, anxiety or other conditions. They were designed for different disorders, which is why they are not terribly effective for migraine as a neurologic disease,” she said. “What we really need is a drug or a treatment option that is designed based on the underlying pathophysiology of migraine,” Starling said. “That is what we haven’t had until right now.”

Researchers are hopeful that several approaches in development, including CGRP-targeted therapies, neurostimulation, selective serotonin 5HT(1F) agonists, and blocking glutamate receptors, will be successful in the near future.

A lack of emphasis

Starling said migraine has historically not been a high priority for research or funding, and its significance and impact is frequently dismissed, both among patients and clinicians.

She cited an annual NIH disease funding chart, in which an X axis represents the burden of disability related to a disease, and a Y axis signifies the amount of funding for that disease. 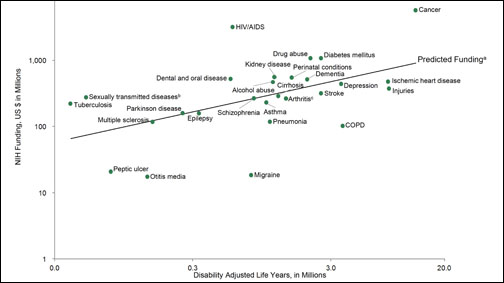 Starling attributes this disparity, in part, to misconceptions surrounding migraine.

“There is a huge stigma in chronic pain disorders in general, and specifically in migraine,” she said. “People who don’t have migraine will say, ‘It’s just a headache. It’s stress. You need to relax a little bit more. Do some yoga.’”

She said she believes the lack of credibility accorded to migraine, which is more prevalent in women, may stem from unacknowledged but long-held beliefs that it is a “woman’s problem” or somehow psychosomatic.

“It’s a culture that we need to change, and hopefully things are starting to change,” she said.

One of the most promising approaches currently in development is the use of monoclonal antibodies. Research has indicated that CGRP plays an important role in the pathophysiology of migraine. Initial studies have demonstrated that levels of CGRP are elevated during a migraine attack, and that after treatment with an as-needed abortive medication such as sumatriptan, which halts a migraine attack, CGRP levels decrease. Moreover, patients with chronic migraine — defined as more than 15 headache days per month — appear to have chronically elevated CGRP levels, Starling said.

“In addition, if you look at the biologic placement of these neuropeptides and their associated receptors, they’re located in the brain regions that are important and critical for migraine pathophysiology, specifically the trigeminal cervical complex, or the TCC, which is very critical for migraine pathophysiology,” she said, “There’s a high degree of co-localization between the neuropeptides, the receptors, and those areas of the migraine brain.”

These associations led to the hypothesis that modulating the CGRP neuropeptide system had potential as a targeted treatment approach to migraines, and an initial class of drugs called CGRP antagonists was developed.

“These molecules block the CGRP receptors, and several different studies were done using these antagonists,” Starling said. “Each and every one of these studies demonstrated that this treatment option could stop an attack when it was occurring. It was very consistent.”

The success of the CGRP antagonists in this capacity led researchers to investigate its potential use on a daily basis for migraine prevention, as well as reduction of frequency and severity. However, studies on a specific CGRP antagonist for daily preventive use found that it led to an elevation in liver enzymes. This prompted researchers to seek other ways of modulating the CGRP system without the small molecule antagonists, and subsequently led to the studies on monoclonal antibodies. Starling likened monoclonal antibodies to an arcade staple.

Starling said studies of all four drugs have yielded consistently positive results in terms of efficacy and safety.

“There is incredible consistency that this is going to be an excellent treatment option,” she said. “In addition, in all of these studies, the drugs have been really well-tolerated, with minimal side effects.”

The drugs have also had a very high responder rate, with at least 30% of patients achieving 50% or greater reduction in migraine days per month, Starling said.

“Another really great thing these studies have shown is that the onset of efficacy appears to be very rapid,” she said. “Within 1 week, we are seeing a separation between the therapeutic group and the placebo group. That’s really amazing and very promising.”

According to Stephen D. Silberstein, MD, professor of neurology and director of the Headache Center at Thomas Jefferson University in Philadelphia, some patients in the trials have demonstrated extraordinary responses to monoclonal antibodies.

“In the trials, they have had these so-called ‘super responders,’ who get a 75% to 90% reduction in headaches,” he said. “Additionally, these drugs have really shown to be safe and effective, with minimal side effects.”

The drugs, which are to be given either as a monthly injection or an infusion every 3 months, do have the potential disadvantage of being very expensive, Monteith said.

“Cost will be an issue, so I think a lot of people will have an interest in trying to determine the population that’s going to best benefit from these treatments,” she said.

According to an abstract from that meeting, the trial included 577 adults with episodic migraines who were randomized 1:1 to receive subcutaneous, monthly placebo or 70 mg of erenumab. The primary endpoint was the change in monthly migraine days from baseline to weeks 9 to 12 of a 12-week double-blind phase. The mean occurrence of migraine days at baseline among the participants was 8.3 days.

“We in the migraine community are hopeful that within the next 1 to 2 years, CGRP-targeted therapy will be available to provide to our patients,” she said.

“Similarly to CGRP, PAPCAP-38 is another neuropeptide that induces acute migraine attacks during human experimental triggering models. Blockade of this pathway may be the next exciting target,” Monteith said.

A new biomarker for migraine

Other current research is focused on the potential role played by irregularities in certain kinds of lipid metabolism in people with migraine. B. Lee Peterlin, DO, of Johns Hopkins University School of Medicine, has been involved in studying this mechanism of migraine.

“We know that there are different quantities of inflammatory proteins that are secreted from the deep vs. the superficial fat, and so when you gain weight, you gain it in different places depending on how far into obesity you are,” Peterlin told Healio Family Medicine. “Our theory is that there’s a difference in the ratio between the deep and the superficial fat in those who have migraine vs. those who don’t. If that ratio changes with weight gain, you can get a change in the total or the relative amount of the deep vs. superficial fat protein production, and that can make you more prone to the inflammation that triggers migraine.”

Peterlin and colleagues have also been studying the potential roles played by lipids and proteins secreted by fat cells during an acute migraine attack.

“Our initial research looking at adiponectin and another adipocytokine called resistin showed that during acute attacks, both adiponectin and resistin went up during an acute attack,” Peterlin said. “These are proteins predominantly secreted from fat cells, so somehow the brain is communicating to this adipose tissue and causing it to release these inflammatory proteins.”

In a 2015 study published in Neurology, Peterlin and colleagues evaluated the role of sphingolipids in women with episodic migraine vs. non-migraineurs. Blood samples were taken from 52 migraineurs vs. 36 control patients, and high-performance liquid chromatography and tandem mass spectrometry were used to identify and quantify sphingolipids. Their results indicated differences in sphingolipid metabolism between the two groups, Peterlin said.

“The study showed that sphingolipids were altered in migraineurs at baseline, and when we used a panel of these sphingolipids, we could predict who had migraine and who was a control just from the lipid panel, without them saying a word,” she said.

Peterlin noted that this was a preliminary finding, and that further studies on sphingolipids as a potential migraine biomarker are planned.

“That study was more of a proof of concept, in regards to determining who was a migraineur and who was a control,” she said. “But as of now, there is no operational biomarker for migraine, so the fact that there is even the potential there is exciting.”

Peterlin and colleagues are also conducting an MRI imaging study evaluating the ratio of deep to superficial fat.

“We’re doing 13 slices of the abdomen, and we’re looking to see if there is really a difference in the ratio of deep to superficial fat, and how that correlates with some of the inflammatory proteins that are predominantly secreted from fat cells,” she said.

Currently, two devices are FDA approved and available for the treatment of migraine: the Spring Transcranial Magnetic Stimulation (TMS) device (eNeura) and the Cefaly device (Cefaly-Technology). The Spring TMS device is designed as an as-needed treatment for migraine with aura by stopping cortical-spreading depression, or CSD, an important underlying electrical process that occurs in migraine aura.

The Cefaly device is designed to reduce the number of attacks suffered by migraineurs through neurostimulation of the trigeminal nerve.

“Those are great, because they offer nondrug approaches for patients with renal disease, liver disease, polypharmacy or even pregnancy,” Monteith said. “These patients could benefit from these treatments, and so could typical migraine patients who don’t want to be on drugs.”

A third device, gammaCore (Electrocore LLC) was recently FDA approved for the treatment of cluster headaches, and the company is also seeking a migraine indication, Silberstein said.

“This is a noninvasive vagal nerve stimulator that’s so far been approved for cluster headaches, but may also be effective for migraine,” he said.

Another approach to migraine, particularly for abortive treatment, is the use of selective serotonin 5HT(1F) agonists. Although 5HT1B/1D receptors, known as triptans, have been a mainstay of abortive treatment for migraines, their vasoconstrictive properties may be contraindicated in patients with certain conditions, Monteith said.

“These are abortive treatments in the pipeline, still undergoing clinical trials — unlike the triptans, these drugs don’t have any vasoconstrictive properties,” she said.

Silberstein said the main benefit of these drugs is that they would offer an option for abortive treatment in patients for whom triptans are not appropriate.

Glutamate receptors have also been studied as a potential target for migraine treatment. A drug currently approved for Alzheimer’s disease, Namenda (memantine, Allergan), acts by blocking the brain’s N-methyl-D-aspartate (NDMA) receptor in the brain, therefore attenuating the effects of glutamate, which is thought to play a role in the mechanism of migraine.

“There was a recent randomized controlled study showing efficacy of this drug in episodic migraine,” Monteith said. “It’s in earlier phases, and is not FDA approved. But potentially, it may be of benefit to patients.”