In What Parts Of The United States Are Lyme Disease Seen?

Lyme disease is the most commonly reported tick-borne illness in the United States. Infections predominantly occur in the Northeast and north-central portions of the United States (Figure 16-1). Ninety-three percent of infections reported to the Centers for Disease Control and Prevention (CDC) from 1992 to 2006 were reported in 10 states: Connecticut, Delaware, Maryland, Massachusetts, Minnesota, New Jersey, New York, Pennsylvania, Rhode Island, and Wisconsin. The Pacific Northwest states also have a moderate number of Lyme disease cases, but this region in not considered by the CDC to be endemic for the dis- ease. In addition to the United States, Lyme disease has also been reported in Europe and Asia. The geographic restriction of the disease is the result of the ecologic niche required for the vectors, the Black-legged tick (Ixodes scapularis) and the Western Black-legged tick (Ixodes pacificus). 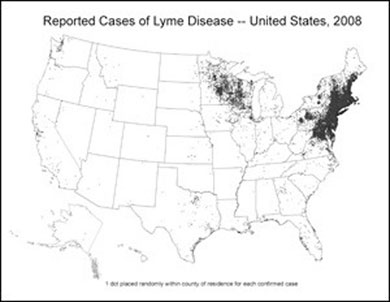 Figure 16-1. Distribution of reported cases of Lyme disease in the United States. (Centers for Disease Control  and Prevention. http://www.cdc.gov/lyme/stats/maps/map2010.html)

The disease was first recognized in 1975 after a cluster of arthritis cases occurred in children living near Lyme, Connecticut. Borrelia burgdorferi was subsequently determined  to  be  the  etiologic  agent  of Lyme  disease.  Ticks  that  become  infected with B burgdorferi acquire the spirochete through feeding on sylvatic animals such as white-footed mice and white-tailed deer, which are the principal reservoirs for the Borrelia spp. Epizootic transmission occurs when ticks subsequently transmit the infec- tion to humans while feeding.

Lyme disease can be divided into 3 temporally based stages. The common manifesta- tions of early (first stage) Lyme disease include a characteristic rash, erythema migrans, which is identified as a spreading erythematous rash with or without central clearing (Figure 16-2). On average, the skin lesion lasts approximately 3 weeks. The rash is often accompanied by fever, headache, myalgia, fatigue, arthralgia, and stiff neck. Left untreated the disease may progress to more serious neurologic (meningitis, meningoencephalitis, uni- or bilateral facial palsy, etc) or cardiac (atrioventricular heart block, myocarditis) manifestations termed early disseminated (second stage). The infection may ultimately result in arthritis in half of infected individuals if not treated. The arthritis tends to involve large joints (knee, shoulder, elbow, etc) with a sudden onset. The involved joint is tender, swollen, and warm. 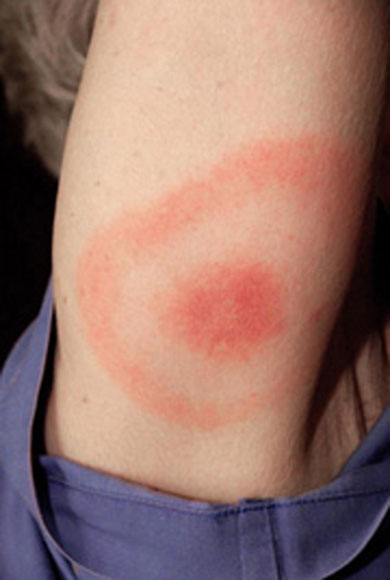 The CDC recommends a 2-phased diagnostic approach consisting of an initial enzymelinked immunosorbent assay (ELISA) followed by a specific Western blot assay. If the initial ELISA is negative, further validation is unnecessary. If the ELISA result is positive or indeterminate, additional confirmatory testing using Western blot is indicated. A Western blot assay detecting both IgM and IgG should be performed if the child is being evaluated within 4 weeks of symptom onset. Children with clinically suspected early (Stage 1) disease who test negative should undergo paired acute and convalescent serologic testing. The IgG Western blot may be performed without the IgM component after 4 weeks of symptoms because most patients with disseminated (later stages) disease will have IgG present.

Currently  recommended  oral  antibiotics  for  the  treatment of erythema migrans (early disease) or early disseminated disease in children include use of one of the orally administered antibiotics listed in Table 16-1. 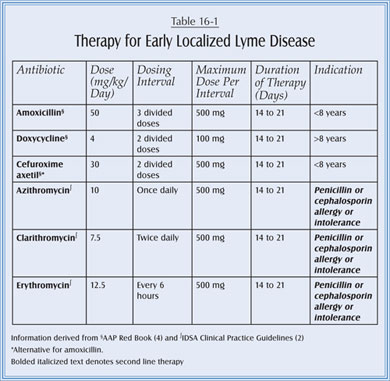 Because macrolides have not been proven to be as effective in treating Lyme disease, they should only be used when children are intolerant or allergic to the primary medications. Close clinical observation should be provided to ensure resolution of the symptoms of Lyme disease. Repeat serologic testing is not indicated. 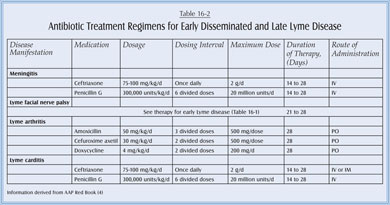