The prevalence of autism spectrum disorder among 8-year-olds climbed 10% between 2014 and 2016 to 1 in 54 children, according to an analysis of data published in MMWR. For the first time, ASD prevalence in black and white children was the same.

The previous prevalence estimate was one in 59 children in 2014. The data come from the CDC’s Autism and Developmental Disabilities Monitoring (ADDM) Network.

Data from a second study published in MMWR suggested that children are being identified with ASD at younger ages. The study focused on children aged 4 years.

“Some of the increase in autism prevalence might be due to the way children are identified, diagnosed and receiving services in their communities,” Stuart Shapira, MD, PhD, associate director for science at CDC’s National Center on Birth Defects and Developmental Disabilities, said in a statement. “The increase may also reflect reductions in racial differences in identification in autism, as this is the first ADDM Network report to identify black 8-year-olds with autism having the same rates as white children.” 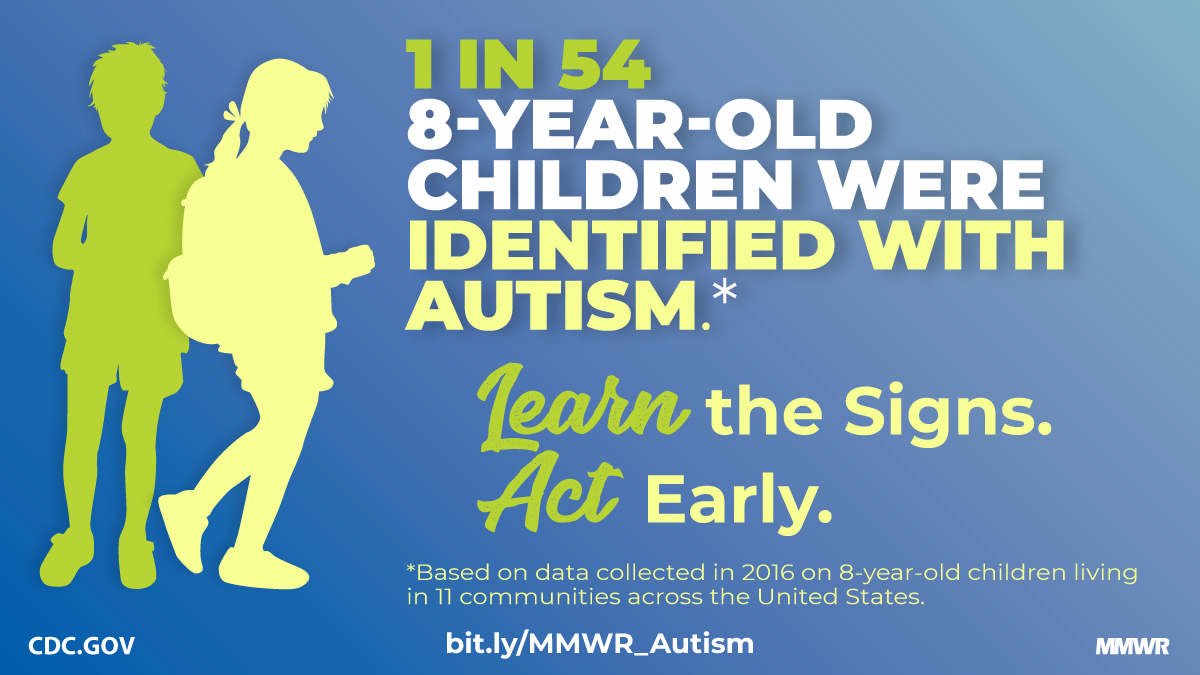 1 in 54 8-year-old children were identified with Autism

The ADDM Network is composed of 11 surveillance sites in Arizona, Arkansas, Colorado, Georgia, Maryland, Minnesota, Missouri, New Jersey, North Carolina, Tennessee and Wisconsin. All children included in the study were born in 2008 and had a parent or guardian who lived in one of the surveillance sites. Each site selected a portion of its state to monitor ASD in children — other than Arkansas, which chose to include the entire state.

New Jersey’s prevalence rate was higher than every other ADDM Network site. Colorado (13.1) and Missouri (13.6) had the lowest prevalence estimates and also limited or no access to education records.

ASD prevalence was higher among males than females (29.7 vs. 6.9), the researchers reported. The combined male-to-female prevalence ratio was 4.3:1. Site-specific ratios ranged from 3.4:1 to 4.7:1.

Children included in the study were all born in 2012 and had a parent or guardian who lived in Arizona, Colorado, Missouri, New Jersey, North Carolina and Wisconsin during 2016.

The median age at earliest comprehensive evaluation for these children was 26 months overall. This ranged from 22 months in North Carolina to 30 months in Arizona and Missouri. Across all sites, 84% of children with ASD had a first evaluation at age 36 months or younger.

Documented ASD diagnoses were found for 71% of children aged 4 years who met the ASD surveillance case definition. The median age of the earliest diagnosis was 33 months. – by Ken Downey Jr.

There are several new and important findings in these reports. First, the estimated percentage of 8-year-old children identified with ASD is one in 54, higher than previous estimates. This increase in ASD prevalence may be due to several factors related to improved methods of identification, including better adherence to AAP recommendations for universal developmental screening at 9, 18 and 30 months and ASD screenings at the 18- and 24-month visits. It is notable that for the first time, there was no overall difference in the prevalence for black and white children. This speaks to the importance of universal developmental and ASD-specific screenings because these activities have been shown to decrease disparities in ASD identification. Despite these gains, Hispanic children were still found to have a lower ASD prevalence. This highlights the importance of developing culturally sensitive screening measures as called for in the recently published AAP clinical report on ASD.

These data document welcome progress toward the Healthy People 2020 goal of evaluation for ASD by 36 months. A higher proportion of children born in 2012 had developmental and ASD diagnostic evaluations before age 3 compared with children born in 2008. This suggests that as providers, we are making progress in developmental surveillance and screening and are becoming more proactive when concerns arise.