Lori Andersen Spruance, PhD, CHES, assistant professor of public health at Brigham Young University, and colleagues watched third- and fourth-grade children compete in 189 randomly selected games in four sports: 61 soccer, 45 baseball, 31 softball and 52 flag football games. They observed four randomly selected children in each game and used a technique called the System for Observing Fitness Instruction Time to quantify their physical activity. Research assistants recorded the food and beverages that were served during or after each game.

They found that snacks and/or beverages were served during or immediately after 78.3% (n = 148) of the games, including 64% of games in which at least two types of snacks and/or two types of beverages were served. Children were provided an average of 43 more calories than they expended during the game. Females — who have a significantly lower energy expenditure than males, according to the researchers — consumed an average of 59.2 calories more than they burned.

“Clinical providers [should] be aware of the numerous environments [where] kids are being inundated with unhealthy food options,” Spruance told Healio. “In a previous qualitative study we conducted with this population, parents seemed to indicate that they weren’t familiar with nutrition intake for youth athletes. I think parents get the idea that their child is playing sports and may need a different diet, but for recreational athletics, children don’t really need a special diet — this is just normal physical activity.” 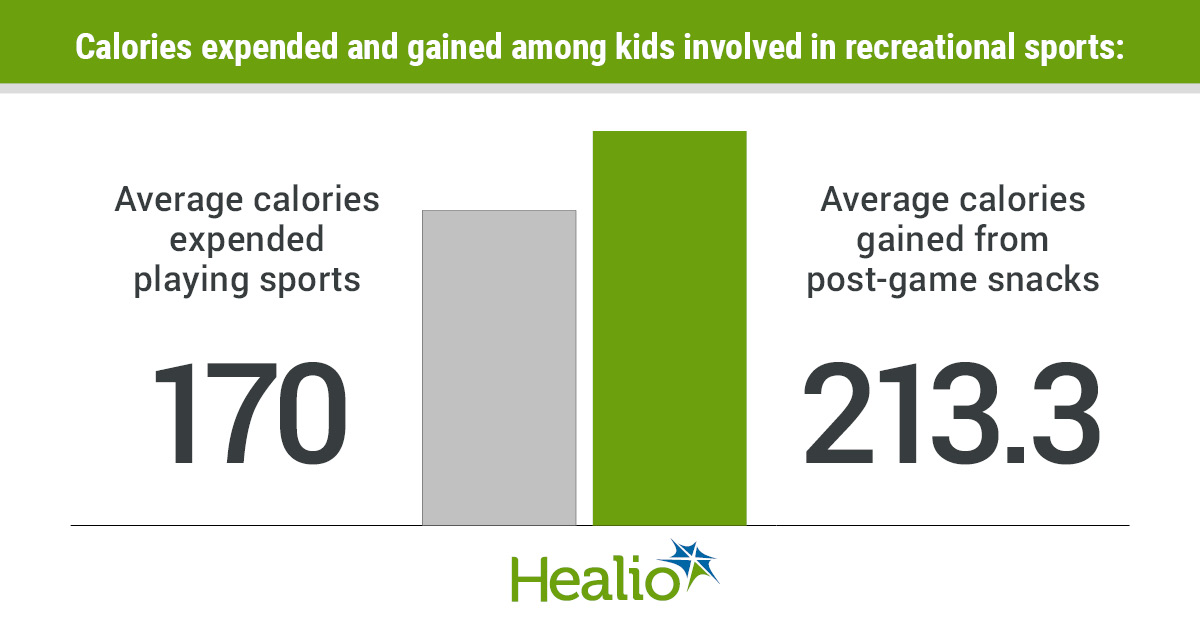 Calories expended and gained among kids involved in recreational sports.

According to the study, sugar-sweetened beverages were offered at 87.6% of the games and 100% real fruit juice was offered at 8.3%, whereas water was offered only 3.4% of the time.

“We need to be aware of the contribution of the youth sports environment and need to further support cultural changes so children can be exposed to healthier habits,” Spruance said.

According to Spruance, all of the study authors were involved with recreational youth sports before the study, so they theorized that the sugar and caloric intake would be high — but they underestimated how high the sugar intake would be.

“Similar studies have indicated that the food environment of youth sports is not great,” she said. “Additionally, other studies have indicated that the physical activity levels are about the same as our findings; no studies, to my knowledge, have combined the two — so this is a great start to understanding both the food and physical activity habits in youth sports.”

Based on the results, the researchers suggested that interventions for both physical activity and food environment may be an important consideration in improving healthy behavior in children.